War in the East: How Khalkhin-Gol changed the course of WWII

Soviet offensive during the Battle of Khalkhin-Gol. Source: wikipedia.org

In 1939 an unknown general named Georgy Zhukov trounced Japan at the Battle of Khalkhin-Gol in the Mongolian steppes, changing the trajectory of Japanese expansionism towards Pearl Harbour and Europe’s Asian colonies.

The reasons for the spectacular Russian victories in Europe during WW II can be traced to a little-known but significant battle that took place in Asia a full two years before Adolf Hitler invaded the Soviet Union.

In August 1939, just weeks before Hitler and Joseph Stalin invaded Poland, the Soviet Union and Japan fought a massive tank battle at Khalkhin-Gol on the Mongolian border. It was the largest armoured battle in the world until that point.

Khalkhin-Gol dramatically changed the course of WW II – and history. Haunted by their crushing defeat the Japanese tore up their plans to annex the Russian Far East and Siberia. Instead they decided it would be easier to expand into the Pacific and Southeast Asia. The upshot: Pearl Harbor and the Japanese invasion of Europe’s Asian colonies.

If you get an opportunity to travel back in time, try and avoid Russia in 1917. Some really terrible stuff was going on there – the downfall of the tsar, the Bolshevik revolution, and an intercontinental civil war. All this in the midst of a world war during which the German Army came within 500 km of St Petersburg. (Yes, this was before they re-appeared in the neighbourhood in World War II) 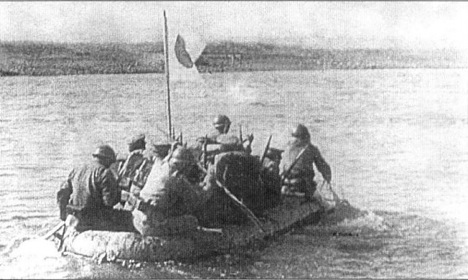 Seeing their giant neighbour in distress, the Japanese occupied its far eastern provinces and parts of Siberia in 1918. However, Japanese adventurism didn’t last long. By 1922, the communists had got their act together and forced Tokyo to withdraw from those territories.

But in 1931 Japan marched back, occupying Manchuria where they established the puppet state of Manchukuo. This was quite alarming from the Russians' point of view because the Trans-Siberian Railway, their only link to the Russian Far East, was now just one pincer thrust away from Japanese-held territory.

Another scare-factor was the anti-communist pact signed in 1936 between Germany and Japan, and later joined by other countries, including Italy, Spain, Turkey, Croatia, Hungary and Finland.

The Japanese had compelling reasons for expanding into Asia. One, it was still the age of empires. If the Nazis were talking of Lebensraum (extra living space for the blue-eyed Germans) in the west, on the other side of the globe Japan was peddling its Greater East Asia Co-Prosperity Sphere, a euphemism for their own version of Lebensraum.

The second factor was natural resources, including oil. Russia’s Far East, for instance, was under-inhabited, under-defended and overabundant in resources; it was simply too tempting. 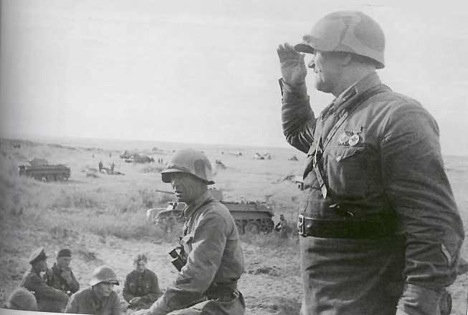 Being Pacific powers, Russia and Japan had been rivals for decades. In the Russo-Japanese war of 1905 Japan had sunk an entire Russian fleet which had rashly sailed around the world from the Baltic Sea. Japan had also occupied Vladivostok during the Russian civil war.

But by the 1930s Russia was resurgent. The Imperial General Staff in Tokyo was particularly concerned about the threat Soviet submarines posed to Japanese shipping, and the possibility that Soviet bombers based in Vladivostok would be able to strike the Japanese hinterlands.

Japan had two strategic options. The North Strike Group of generals within the Japanese Army wanted to seize Siberia as far as Lake Baikal for its resources. The South Strike Group – backed by the Japanese Navy – sought the rich lands of south-east Asia, which were under the shaky rule of effete European powers like Britain, the Netherlands and France.

Striking in China and Mongolia

The North Strike Group prevailed. In 1937 the Japanese, convinced that Joseph Stalin’s purge of 1935-37 had crippled the Soviet officer corps, rolled into China. The country was in the midst of a civil war and didn’t really put up a fight. The invasion forces quickly seized Shanghai and Nanking, where they killed millions of Chinese civilians. 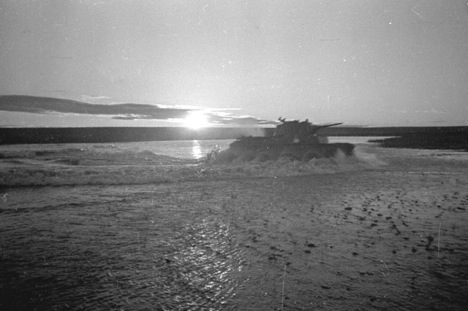 The Russians – fearing encirclement by Japan and Germany – acted quickly. They concluded a treaty with China, furnishing financial and military aid; 450 pilots and technicians and 225 warplanes were sent to China in 1937.

But the real high stakes game was about to unfold on the Mongolian steppes. During July and August 1938, Japan and Russia repeatedly clashed at the borders between Mongolia (a Soviet ally) and Manchuria. After bitter air and land battles, the Japanese finally decided on a full-on clash. They chose a remote area on the Khalkhin-Gol, the river between Mongolia and Manchuria. In May 1939 the Japanese occupied the area around the village of Nomonhan, hoping to challenge Russia. The Japanese Army was confident their attack force would strike the enemy “like a butcher's cleaver dismembering a chicken”.

The command of the Soviet forces went to a relatively unknown general who had escaped Stalin’s bloody purges through sheer chance. This was 42-year-old Corps Commander Georgy Zhukov. By mid-August, Zhukov had amassed 50,000 troops, 216 artillery pieces, and 498 armoured vehicles including tanks. Air support was provided by 581 planes.

At 5am on August 20, 1939, Zhukov struck. It started with 200 Soviet bombers pounding the Japanese positions. When the bombers withdrew, a massive artillery barrage began that lasted nearly three hours. Meanwhile, the planes returned for a second bombing run. Finally, Zhukov ordered the artillery to launch a 15-minute barrage at the Japanese troop concentrations.

“The Japanese huddled in their trenches under the heaviest bombardment to which they or any other Japanese unit had ever been subjected,” writes Stuart D. Goldman in Nomonhan, 1939: The Red Army's Victory That Shaped World War II. “Artillery came pouring in at two to three rounds per second. Earth and sky throbbed.”

With their own artillery knocked out, the Japanese were defenceless against the flame throwing tanks, which a Japanese officer saw “spitting red darts like the tongues of snakes”. A Japanese artillery commander described the bombardment as reverberating like “the gongs of hell”.

The effect, physically and psychologically, was shattering. The denouement came when shell-shocked Japanese soldiers ran out of water and in their desperation drank the foul liquid from the radiators of their military vehicles, thereby immobilising the vehicles.

What followed was a combined assault. Soviet infantry attacked the Japanese centre and armour encircled the Japanese flanks. By the 11th day of the battle, the Japanese force was decimated and surrounded. A few Japanese units managed to break out of the encirclement, but those that remained were finished off by air and artillery attacks. 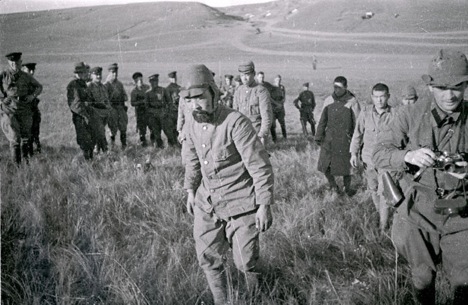 On September 16 the undeclared war was declared over.

Changing the course of history

Khalkhin-Gol had two major results. One, it secured Russia’s backdoor. Japan’s imperial military realised it had seriously underestimated the Russians. It would never again threaten Russia. And indeed when Germany attacked, the Japanese – despite the temptation and Hitler’s pressure – stayed away.

Zhukov ensured that Germany and Japan never got a chance to link up their conquered areas through Russia. The overstretched Soviet military was able to focus its forces on just one front. They were able to move 15 infantry divisions, three cavalry divisions, 1,700 tanks and 1,500 aircraft from the Far East to the European front. These reinforcements turned the tide in the Battle of Moscow in 1941.

The battle catapulted Zhukov into the top ranks of the Soviet brass. Several of his trench mates at Khalkhin-Gol later became prominent wartime commanders. S.I. Bogdanov, Zhukov's chief of staff, went on to command the 2nd Guards Tank Army, one of the elite mechanised formations that played an important role in Germany’s defeat.

Khalkhin-Gol demonstrated the viability of Russian military tactics. A year after flinging the Germans back from Moscow, Zhukov planned and executed his offensive at the Battle of Stalingrad, using a technique similar to Khalkhin-Gol. In this battle, the Russian forces held the enemy in the centre, built up a mass of force in the area undetected, and launched a pincer attack to trap the Germans. 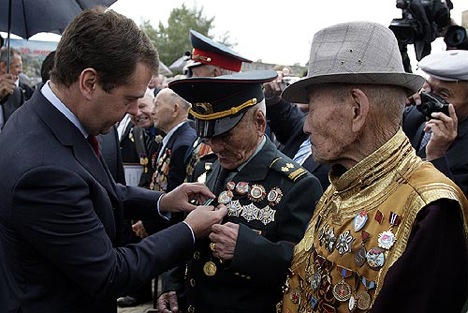 (In fact, so confident was Stalin that on September 17, 1939, a day after hostilities ended at Khalkhin-Gol, he confidently marched into Poland)

Secondly, Japanese war planners now began to look at British, French and Dutch colonial possessions in Southeast Asia as offering greater prospects for expansion. As European armies were being soundly thrashed by Germany, the South Strike Group went in for the kill and prised out their colonies one by one, with the most spectacular victory coming at the Battle of Singapore, where they defeated 135,000 British troops. The humiliation of British officers and soldiers in front of the subject peoples of Asia played a huge role in ending colonialism in Asia.

Japan’s reverse move also sent it headlong into war with the United States, resulting in the brilliant – if ultimately counterproductive – attack on Pearl Harbor on December 7, 1941.

The rest, as they say, is history.