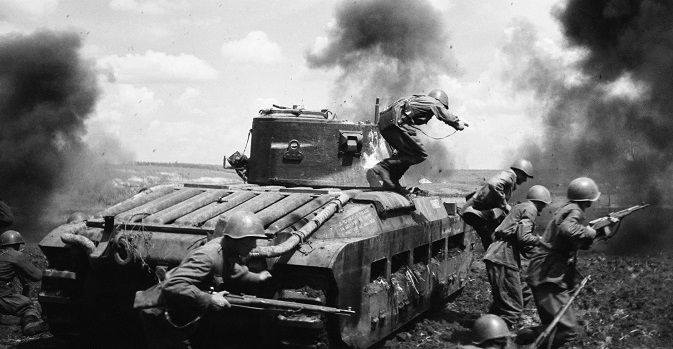 For the USSR, it was a war of existence. Source: RIA Novosti

In Russia, May 9 is a day to reflect on the great sacrifices committed by the brave men and women of the Soviet Union, who fought till death to defeat Nazi Germany.

Many events of the past in Russia are now disputed and highly debated among a people who didn’t have complete freedom of expression for many decades. There is, however, one historical event that unites people from all walks of society, rich or poor, young or old, urban or rural, communist or capitalist: the heroic efforts of the Soviet men and women in the Second World War or the Great Patriotic War as it’s known in Russia.

Even the tiniest villages in Siberia and the farthest reaches of the country have a Victory Square, with an eternal flame and a wall with engraved names of those who committed the supreme sacrifice to save the country. Given the fact that about 27 million Soviet citizens died in the war against Nazi Germany, the most evil regime ever known to humankind, it’s hardly surprising that Victory Day is looked upon with such reverence and solemnity.

This was a war, where India and Russia were on the same side, but the prolonged conflict had much less of an impact on the former, which was on the verge of its “tryst with destiny.” Independent India faced 4 wars with its neighbours but since a vast majority of civilians were absolutely safe from harm’s way, it’s not easy for many of us, as Indians, to fully comprehend the sheer destruction and misery that the Nazi Germany-imposed bloodbath caused to the Soviet Union.

War in the East: How Khalkhin-Gol changed the course of WWII

Great filmmakers like Sergey Bondarchuk captured the essence of the war well in films like ‘Destiny of a Man’. Soviet war films don’t make for easy viewing but those armchair hawks who keep baying for blood should watch them to understand what exactly happens when there is an intense world war. Historically, in most cases war could have been avoided but when the Germans attacked the USSR in 1941, there were 2 options: subjugation to an evil and genocidal regime or die trying.

For the USSR, it was a war of existence. Perhaps the Soviet people had no clue when they fought the war that they were actually fighting for humanity as a whole. One can only break into cold sweat at the horrific thought of Adolf Hitler’s regime defeating the Soviet Union. Yet, like Napoleon in the 19th century, Nazi Germany was not strong enough to break the will of the Russian people. Many countries are justifiably proud of their roles in the Second World War, but on May 9, the world needs to take a moment to thank the erstwhile Soviet Union and Russia for all the sacrifices it made, without which, most parts of world wouldn’t be enjoying the freedoms that are taken for granted.

Just like the end of war brought a lot of hope for the people of the war-ravaged country, the celebrations of the victory each May come with the hope of warmer weather. This year, when Russia faced one of its most severe winters in living memory, the warm, long and sunny days are a balm for a people who always dream of extended summers.

For children and university students, vacations are just around the corner. Grown-ups look forward to getting back to the gardening and potato farming in the dachas. There’s a general sense of contentment in the air. Green grass and aqua-blue hills replace the blanket of snow that covered most parts of the country for months as Russia awakes to a new spring and summer.

Victory Day indeed ushers in the most cheerful period of the year.