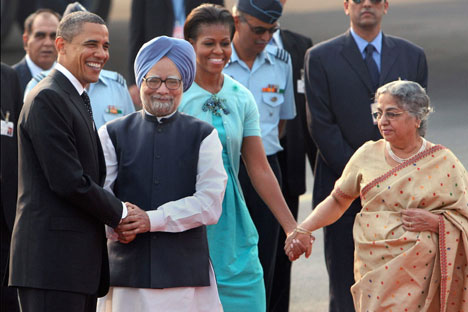 India has stubbornly resisted the pressure from USA to dilute the provisions of its Nuclear Liability Law specifically for accommodating the business interests of the American companies which hope to sell reactors to India. Source: AP

The underlying criticism that India is ineffectual in imposing its will on the international community is untenable in the prevailing international system characterized by growing “multipolarity.”

An old refrain reappeared lately in India’s foreign policy discourse, namely, that the government is following a “weak” foreign policy. This has been a right-wing criticism rooted in nationalistic posturing and jingoism, but lately even communists tend to join the chorus.

The underlying criticism that India is ineffectual in imposing its will on the international community is untenable in the prevailing international system characterized by growing “multipolarity.” Besides, no one is spelling out how a “strong” foreign policy should look like for it not to end up “weak” in the contemporary world. Put differently, foreign policy has become the stuff of jingoism and grandstanding in India’s acrimonious party politics.

However, the facts should speak for themselves. And the fact on the ground is that India has always pursued a hard-nosed foreign policy. Not many countries would have created a new nation state on the world map, as India did in the former East Pakistan. Most certainly, India’s liberation of Goa from Portuguese control was a much harder way of doing things in comparison with China’s retrieval of Hong Kong from the British colonial possession. The most recent evidence of India’s “hard” foreign policy has been the characteristic stubbornness with which India recently rejected the Arms Trade Treaty [ATT].

It did not deter India for a moment that a big majority of countries in the world community supported the new framework regulating the international trade in conventional weapons. India’s rejectionist stance in the United Nations General Assembly voting on the ATT has been of a piece with the stance it has adopted all along vis-à-vis international covenants that did not suit its national interests – Nuclear Non-Proliferation Treaty, International Criminal Court, Comprehensive Nuclear-Test-Ban Treaty.

Despite the importance of the US-India nuclear deal of 2008 being a crucial vector in the strategic partnership between the two countries and for the country’s foreign policy as a whole, and considering the manifest keenness of the American side to do nuclear commerce with India, New Delhi has stubbornly resisted the pressure from Washington to dilute the provisions of its Nuclear Liability Law specifically for accommodating the business interests of the American companies which hope to sell reactors to India.

There are minor acts, too, of India playing hard ball in its day-to-day diplomacy. At the end of the day, it should be an eye opener that the two Italian Marines who shot and killed Indian fishermen last year have been languishing in jail and awaiting the “due process of law” to take its course despite immense pressure from Rome for their release.

Indeed, India risked its dialogue process with Pakistan by refusing to settle differences on any “doable issue” (issues where compromise is possible) unless and until Islamabad conclusively dismantled the infrastructure that supported cross-border terrorism. Small confidence-building measures have been taken but not a single major concession has been made by New Delhi pending transparency regarding Pakistan’s intentions toward India.

Again, by now it is a legion that New Delhi brought the Maoists in Nepal down on their knees and got them to face the unpalatable truth that no elected government in Kathmandu can survive for long without India’s goodwill and helping hand. The Maoist leader Prachanda acknowledged this fact of life during his recent India visit. Equally, India doggedly pursued its own track toward the military rulers in Myanmar and trusted that the world would ultimate follow suit some day; and, its blind faith in its own “hard” foreign policy course has since been vindicated.

To be sure, there have been the inevitable failures too, such as when New Delhi failed to extract concessions from the Sinhala-dominated government in Colombo to concede greater autonomy to the Tamil regions. But then, arguably, in the contemporary “multipolar” world situation, small countries like Sri Lanka (or Maldives), which are strategically located, are well-placed to create space for themselves in fortifying and defending their perceived core interests from being eroded due to external pressure by playing one big power against another. Forcing an Indian solution to the Sri Lankan Tamil problem that does not find acceptance with the democratically elected government in Colombo, which is sensitive to the domestic public opinion, is an impossible task to achieve.

Curiously, India’s “hard” foreign policy took on an entirely new facet in the most recent weeks when the government demonstrated the will and the capacity to push policies with long-term objectives disregarding robust domestic public opinion. The government more or less sequestered itself from the rising crescendo of media opinion and the exhortations by the strategic pundits regarding the tensions ensuing from China’s “incursions” on the Line of Actual Control. In the event, the government’s handling of the situation has proved successful and the detractors who pelted stones have been exposed for what they are – downright jingoistic. And the detractors included people who held high positions in the country’s foreign policy and security establishment.

There was a significant body of domestic opinion that India should escalate the “eyeball-to-eyeball” confrontation with China on the LAC, but the government did not fall into the trap and instead it chose to focus clinically on a mutual problem that has been building up over time with the two countries incrementally taking advantage of the ground alignments, which ultimately led to the recent tensions. True, Beijing may have forced a reluctant India to bring the border dispute to the front burner or the discussion table, but it is not a bad thing to have happened, either, in the long-term interests of a predictable and stable relationship between the two countries.

Conceivably, a “weak” foreign policy might well have led to a catastrophic repeat of what happened in 1962 when the government allowed itself to be collared by an irresponsible, jingoistic chorus of domestic opinion. The heart of the matter is that China and India are emerging powers and a rivalry or armed conflict between them is simply unthinkable.

Quite obviously, the international community held back from voicing opinion when tensions appeared in the Sino-Indian ties lately. But no sooner than the tensions abated, the US was quick to make commendatory remarks about the manner in which the tensions were defused. To quote deputy secretary of state William Burns who was on a visit to New Delhi in the weekend, “We [US] hope very much that China and India will be able to work together on longstanding boundary disputes in a peaceful manner and it’s encouraging… that [External Affairs] Minister Khurshid, as I understand it, is in China today. We support the healthiest and strongest possible relationship between India and China.”

The lesson to be drawn is that what makes a good foreign policy is ultimately that it is based on great clarity of thinking regarding the country’s long-term interests and that it is unfailingly in consonance with the national priorities of development. It is irrelevant whether foreign policy looks “hard” or “soft” but what counts is that it is resilient enough to defy the jingoistic domestic opinion at times, as in this case involving the sensitive ties with China.