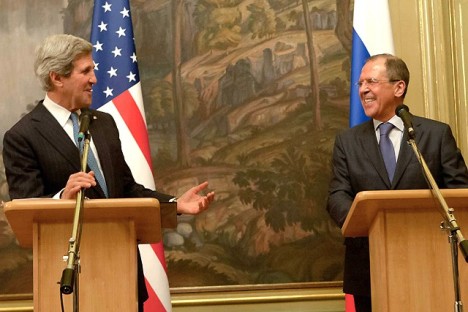 Wheels up! Secretary Kerry concluded a two-day trip to Moscow last Wednesday, his first visit to the Russian Federation as Secretary of State – and I wanted to share some of the highlights with you.

His trip occurred as part of an intensified set of contacts with senior Russian officials this year leading up to a meeting between President Obama and President Putin on the sidelines of the G-8 meeting in Northern Ireland in June, to be followed by President Obama’s visit to Russia in the first week of September.

Soon after his arrival in Moscow, Secretary Kerry laid a wreath at the Tomb of the Unknown Soldier, a monument to veterans located not far from the Kremlin.

Later that week, Russia celebrated Victory Day, a national holiday, with a traditional parade on Red Square and other events honoring veterans.

The Secretary laid a wreath to honor the sacrifices the Russian people made during the Second World War, which is referred to here as the Great Patriotic War.

As a testament to our countries’ shared sacrifice, the ribbon read, "In Eternal Memory of Our Heroes who perished in the struggle for our Shared Victory.”

The Secretary then met briefly with several Russian World War II veterans to honor their courage and valor during the war.

While in Moscow, Secretary Kerry met with Russian President Vladimir Putin and, while he acknowledged that there have been some disagreements between our two countries, he noted that on really important issues like Iran, North Korea, and Afghanistan, we have maintained real cooperation.

Secretary Kerry also stated our belief that we share some very significant common interests with respect to Syria, and outlined a set of arguments for why cooperation between the United States and Russia was critical for ending the bloodshed there and jumpstarting a political transition process. Secretary Kerry and President Putin exchanged views on how to increase trade and investment between our countries. He thanked President Putin for cooperation in dealing with the Boston bombings.

Secretary Kerry traveled to the magnificent osobnyak guest house, the Reception House of Russia's Ministry of Foreign Affairs and Moscow's most renowned diplomatic mansion — the Morozov House, No. 17 on Spiridonovka, for an extensive meeting with Foreign Minister Sergey Lavrov and his delegation.

U.S. Ambassador to Syria Robert Ford accompanied Secretary Kerry, and Deputy Foreign Minister Mikhail Bogdanov participated on the Russian side to facilitate a serious and extensive discussion about Syria.

I don’t remember exactly but I think it was close to 2:00 am when we finally finished dinner.  On his first day in Moscow as America’s chief diplomat, Secretary Kerry engaged in some very serious diplomacy.

On the following day, I hosted a discussion between Secretary Kerry and nine prominent civil society leaders in Russia at my residence, Spaso House.

These representatives of some of Russia’s most prestigious non-governmental organizations and think tanks had the chance to describe to Secretary Kerry the increasingly difficult environment in which they operate.

The Secretary expressed support for the development of an independent Russian civil society, and received some helpful suggestions on how to foster greater engagements between American and Russian societies in the future.

The most exciting moment of Secretary Kerry’s trip was having the chance to introduce him to his fantastic team here at Embassy Moscow.

The Spaso House ballroom was electric with the enthusiasm of our Embassy staff at meeting their new Secretary.   We were all very grateful to hear Secretary Kerry’s words of praise for our mission and service.

Last year was a difficult one in U.S.-Russia relations.  Secretary Kerry’s visit, however, reminded me of the importance of engagement, especially at the highest levels, and why 2013 has the potential to produce a more productive trajectory in our bilateral relations.

During such visits, we can reaffirm our continued cooperation with Russia on issues of mutual interest such as trade and investment, North Korea, Iran, Afghanistan, counter-terrorism, and military-to-military cooperation.

We can seek to develop new ways to cooperate on hard issues such as Syria or missile defense.

And even if we do not succeed in finding mutual approaches to problems, high-level engagement ensures that we do not allow confrontations to develop based on misunderstandings or misperceptions.

Secretary Kerry’s visit most certainly advanced our interests on all these fronts and gave new vigor to our diplomatic engagement with Russia.  It’s great to have him lead our team!