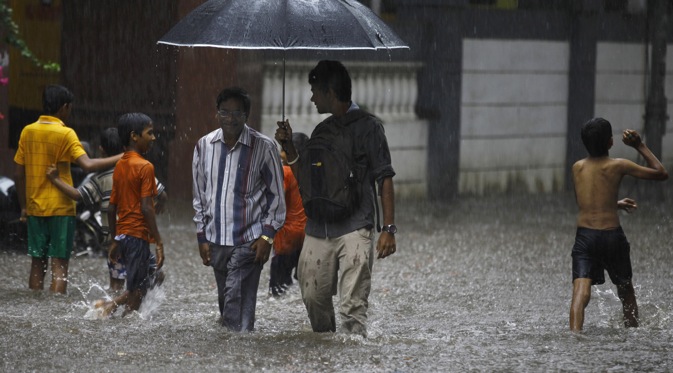 Russian fisherman's boots would be of great use in such conditions in Mumbai. Source: AP

There is one common piece of footwear that will prove to be useful, whether fishing for salmon in Sakhalin’s rivers or dealing with the fury of the monsoons in India’s largest city.

Given the great disparities in climatic conditions for most of the year between the Russian Far Eastern island of Sakhalin and India’s chaotic metropolis, Mumbai, one would be hard-pressed to find a common item in a shoe-rack in both places. Yet, in the summer months on the Russian island, which coincide with the rainy season in the home of Bollywood, there is something that has universal value: the humble сапоги рыбака (sapogi ribaka or fisherman’s boots).

From the month of June, several species of salmon come back to Sakhalin’s islands to spawn and die. This is the best time to engage in licensed fishing by the island’s great southern capes. Even those who are vegetarian or fans of ‘Finding Nemo’ would enjoy some time by the areas where the island’s rivers run into the North Pacific Ocean (or the Sea of Okhotsk). Of course, one can’t go fishing in the rivers without a good set of rubber boots. These boots keep your feet dry and ensure that you can stay in the water for hours. Salmon tend to be very intelligent fish and don’t give up without a fight, so it takes a tremendous amount of patience to catch one, no matter how experienced a fisherman you are.

Patience is exactly the virtue that someone needs to live in India’s financial capital, especially if it’s in what is referred to as the suburbs in the rainy season. Within a 24-hour span that began at 8 am on Sunday, June 9, the suburb of Goregoan in northern Mumbai received 226.2 mm of rainfall! This of course meant flooded roads, delays in suburban railway services, falling trees and the likes. But, if only the residents of this Mumbai suburb had Russian fisherman’s boots, they could have easily navigated the flooded streets without getting their feet dirty and wet and walked right in the middle of the road like royalty.

Having undertaken the difficulty of bringing my heavy fishing boots all the way across Russia from Sakhalin to Moscow and then to Mumbai, on one of the rainiest June days in the city, I fearlessly treaded the paths in the northern and southern parts of the city. All the grime and muck in those waters would not enter my protected (though sweaty) feet. Sure, I was stared at by quite a few amused Bombayites, but then one gets used to getting stared at when walking as a lone Indian in distant parts of Russia. Those friends of mine, who mocked me and said that people would mistake me for an employee of the municipal corporation on duty to pump out floodwater, ended up with soggy socks and God-only knows what kind of germs and bacteria on their feet! As the saying goes, “he who laughs last laughs longest.”

Of course, these boots do have their drawbacks. Imagine fishing on a lonely river in Sakhalin and being confronted by a hungry bear. It would be anyway be suicidal to run from the animal, but there is the psychological feeling of being substantially heavier and not having the ability to make a dash for it none the less. In Mumbai, it means being deprived of the opportunity to chase down a bus or a train. It also means extended walking time, but then again, walking with such heavy boots can only make your legs stronger in the long run. There is also a real danger of falling on staircases, so wearing such footwear has to come with a sheer determination at times to walk at a snail’s pace.

This is the season of joy in the Russian Far East with warm, long and sunny days with picnics in the forests or by the sea shore and in Mumbai with glorious rains enjoyed over samosas and masala chai or treks in the wonderful hills and mountains of Maharashtra.