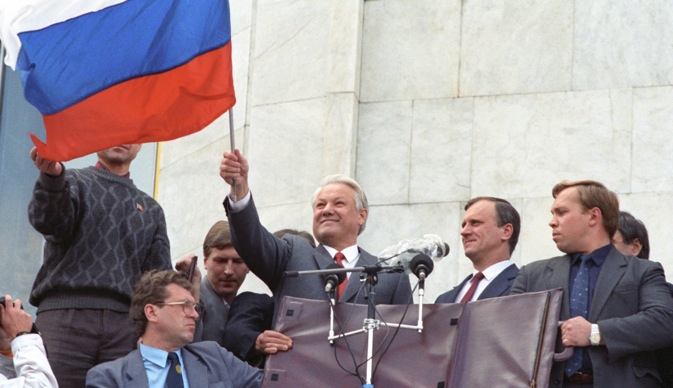 The Day of Russia marks the date when the First Congress of People's Deputies of the Russian Federation adopted the Declaration on Russia's National Sovereignty. Source: ITAR-TASS

The holiday marks a very significant day in the modern Russian history, although people have a diametrically opposite views about it, some even call it a tragic day.

On June 12, 1990, the first really democratically elected parliament of the Russian Soviet Federative Socialist Republic (RSFSR) overwhelmingly voted (900-13) for the Declaration of State Sovereignty of the USSR's core republic. This was the turning point in the history of the vast Eurasian empire. Many constituent republics of the USSR had already declared their sovereignty in what was called 'parade of sovereignties'.

Even 23-years later, I vividly remember the hurriedly summoned press conference by the Chairman of the Presidium of Supreme Soviet (parliament) of RSFSR Boris Nikolayevich Yeltsin, within hours of the crucial vote. It was in the same huge Great Hall of the Grand Kremlin Palace, where the Supreme Soviet of USSR used to hold its regular sessions. Many people of the elder generation might still remember seeing in newsreels this huge oblong hall with rows of desks like in a classroom and an elevated podium of the presidium with a statue of Lenin installed like a deity in a niche in the wall. However, that day the statue of Lenin was hidden behind a placard with Soviet Russia's state symbol.

Since the Russian leader had no venue for holding press meets, hundreds of reporters from all over the world were accommodated on the seats of the lawmakers. These very lawmakers, who a couple of hours earlier had adopted the fateful  declaration still wrongly regarded by many Russian's as the declaration of independence, were unable to reply: “independence from whom?”

After a little wait, a fatigued but confident looking Yeltsin, flanked by his deputies entered the hall and was greeted with applause by the reporters representing the Soviet and Russian media. Yeltsin spoke about his plans to build a free, democratic, developed and prosperous welfare state in Russia. “We will turn the pyramid of power upside down,” was his reply to the question: how he intended to do this?

It was a time when the Soviet Communist elite were involved in an all-out power struggle. Both hardliners and reformists, in spite of their diametrically opposite goals, viewed Soviet President Mikhail Gorbachev as the main stumbling block. But people wanted change.

Exactly a year later, on this day with the widest popular support Boris Yeltsin became first-ever directly elected head of the state in the entire history of Russia, by defeating his strong hard-line rivals, including former Soviet Premier Nikolai Ryzhkov in the presidential polls.

Emergence of a popularly elected alternative to Soviet President Gorbachev sped up the Soviet collapse, which a decade later was described by President Vladimir Vladimir Putin as “the geopolitical catastrophe of immense proportions.”

However, since time immemorial Russia has been re-emerging from even bigger catastrophes only to become stronger.

“Modern Russia needs to become a successful state, a home of optimists. May be it could take another decade or two, then probably we would celebrate the Russia Day like you celebrate the Republic Day in India to showcase the progressing unity in diversity,” Alexander, my friend from the university days, says adding, “all the best things I had in my life, were in the USSR.”