Nawaz Sharif’s baptism under US fire 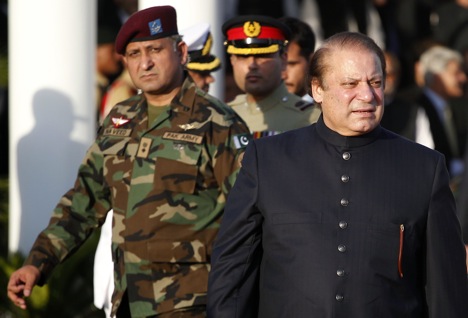 Sharif finds himself between a rock and a hard place. This is virtually baptism under fire. Source: Reuters

The issue of the Pentagon’s drone attacks on Pakistan’s tribal areas is surging as the first foreign-policy challenge for the new government in Islamabad.

That the US is testing the water and forcing the issue of the drone attacks is apparent. For several weeks through the campaign for the parliamentary election in Pakistan, Washington suspended the drone attack.

Now a pattern is emerging. No sooner than the election results came out signalling the victory by Nawaz Sharif’s Pakistan Muslim League (N), the interlude was broken with a drone attack on May 29. The attack was “fruitful” insofar as it resulted in the killing of the Pakistani Taliban’s deputy head Wali-ur Rehman.

Rehman’s death constituted a huge blow to the militants and both Washington and Islamabad had reason to be satisfied. In diplomatic terms, the May 29 attack became a test case of how under the new political dispensation Pakistani leadership would take continued drone strike. The Foreign Ministry’s reaction was rather “routine” while Sharif initially criticized the drone attack although with the important caveat that he would nonetheless cooperate with the US’ operations in Afghanistan. Sharif conveyed this personally to the visiting US special representative on Afghanistan and Pakistan James Dobbins who called on him on May 30.

However, sensing the popular anger, Sharif quickly “hardened” his stance in his maiden speech at the National Assembly as prime minister on June 5, barely warning this time that if the drone attacks continued, there would be consequences for Pakistan’s ties with the US. Sharif’s words were firm and categorical: “We respect the sovereignty of others and they should respect our sovereignty and independence. This campaign must come to an end now.”

Evidently, Washington has brushed aside Sharif’s admonition and instead decided to up the ante. The next drone attack on June 7 happened to be just two days after Sharif speech, in which “at least seven people were killed.” In essence, the Obama administration has deliberately provoked the Nawaz Sharif government and its import has not been lost on the prime minister, either. Sharif has reacted strongly calling the drone attack “unacceptable” and pledging to take counter measures.

Meanwhile, Imran Khan’s Pakistan Tehreek-e-Insaf [PTI] has jumped into the fray and tabled a resolution in the National Assembly calling on immediate countermeasures, including military measures if need be, to stop the drone attacks. The PTI, which is believed to enjoy the Pakistani military’s tacit support, is obviously killing two birds with one shot  – placating its Islamist flock as well as to embarrass the government. The PTI would know that military measures against the US’s drones are virtually a non-starter since it will be confrontational and Pakistani army is hardly in a position to stand up to the Pentagon by shooting down a drone (which in principle it could), being the recipient of substantial US military aid.

To be sure, Sharif finds himself between a rock and a hard place. This is virtually baptism under fire. Sharif’s preference is to view the totality of Pakistan-US relationship and isolate the drone affair as a small part of it, with the expectation that as the relationship improves and mutual confidence builds up with the Obama administration, a satisfactory way out can be found.

But, on the other hand, Washington prefers to ratchet up tensions in a calibrated way and is hoping thereby to bring on to the table the entire range of issues affecting the troubled US-Pakistan relationship by the time secretary of state John Kerry arrives in Islamabad later this month. This is of a piece with the US’ time-tested diplomatic style of negotiating deals and trade-offs with junior partners once they have been brought under pressure.

The US would estimate that it has the upper hand here insofar as it also has a direct line open to the Pakistani army leadership, which would keep Sharif guessing all the time about the “unknown unknown” and compel him to be less assertive and fall in line. Clearly, the US hopes to cash in on the back-to-back involving the Pentagon and Rawalpindi, which puts the civilian leadership of Sharif in Islamabad at a disadvantage.

The Obama administration hopes to bring around Sharif to seeing the writing on the wall and to become a collaborator in the war effort in Afghanistan or at the very least jettison any fanciful notions he would have of resetting the US-Pakistan military-to-military cooperation.

The heart of the matter is that given Sharif’s close links in the past with the religious parties and Punjab-based militant groups, there is a trust deficit in the US’ dealings with him and despite the olive branches held out by Sharif’s aides in the recent months to the US, Obama administration – CIA and the Pentagon, in particular – is not convinced that a transparent relationship is possible anytime soon.

Or else, the US could have – and should have – held in abeyance for the time being any further provocative drone attacks at least until the intentions and policy directions of the new government in Islamabad are first ascertained and a modicum of effort made at Kerry’s level to find a modus vivendi and try and harmonize Sharif’s domestic political needs as a democratically-elected leader (who needs to be responsive to public opinion) with the US’s operational strategies in Afghanistan.