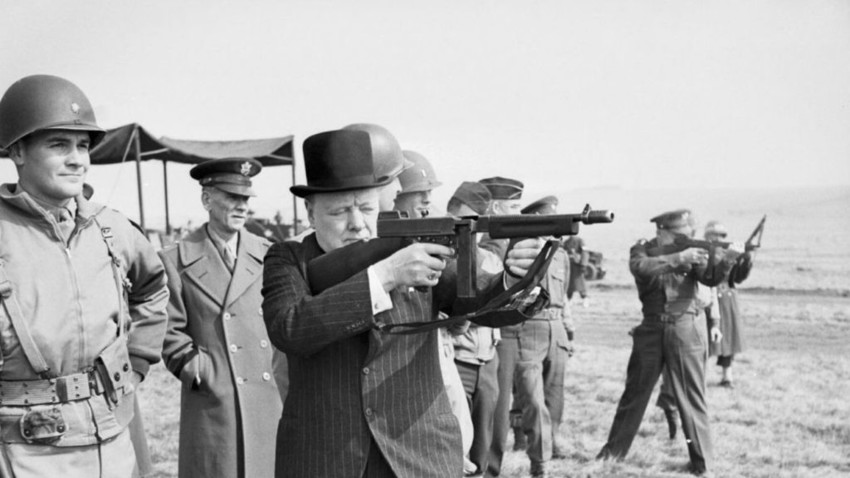 Public domain
In the closing days of WW II, Winston Churchill came up with a bizarre plan for a joint British-American attack on the USSR. When told the Russians would bombard the UK on a massive scale, the British PM quietly backed off.

Winston Churchill in 1942. Source: US Library of Congress/wikipedia.org

On May 8, 1945, as people everywhere celebrated the end of World War II, one gloomy figure was planning to start World War III. The ink had barely dried on Germany’s surrender document when British Prime Minister Winston Churchill asked his War Cabinet to draw up a plan to invade the Soviet Union.

Churchill’s belligerence was due to several factors. In Winston’s War, Max Hastings writes Churchill’s satisfaction at seeing the downfall of the Nazis was “almost entirely overshadowed” by Russian victories in Eastern Europe.

By 1945, the USSR was vastly stronger and Britain a lot weaker than Churchill had anticipated. As he remarked at the Yalta Conference in February 1945: “On one hand the big Russian bear, on the other the great American elephant, and between them the poor little British donkey.”

Secondly, Churchill’s stance against the Soviets hardened after he came to know about the success of the American atomic bomb programme. According to Alan Brooke, Britain’s Chief of Army Staff, Churchill told him at the Potsdam Conference in July 1945: “We can tell the Russians if they insist on doing this or that, well we can just blot out Moscow, then Stalingrad, then Kiev, then Sevastopol.”

Winston Churchill, Franklin D. Roosevelt and Josef Stalin at the Yalta Conference in 1945. Source: US Library of Congress/wikipedia.org

Asked to prepare for war just days after the end of the bloodiest conflict in history, the British generals thought the Prime Minister had really lost it. Brooke wrote in his diary: “Winston gives me the feeling of already longing for another war.”

The generals drew up a plan, appropriately codenamed Operation Unthinkable, which proposed Western forces attack the Soviets on a front extending from Hamburg in the north to Trieste in the south.

The War Cabinet listed out the total allied strength in Europe on July 1, 1945: 64 American divisions, 35 British and Dominion divisions, 4 Polish divisions, and 10 German divisions. The German divisions were purely imaginary because after the mauling they received from the Russians, the surviving soldiers were in no hurry to fight. At most, the allies would have mustered 103 divisions, including 23 armoured ones.

Against this force were arrayed 264 Soviet divisions, including 36 armoured. Moscow commanded 6.5 million troops – a 2:1 advantage – on the German border alone. Overall, it had 11 million men and women in uniform.

In aircraft, the Allied Tactical Air Forces in North West Europe and the Mediterranean consisted of 6,714 fighter planes and 2464 bombers. The Soviets had 9380 fighter aircraft and 3380 bombers.

As the Germans had discovered, war against Russia was certainly not a walk in the park. The War Cabinet stated: “The Russian Army has developed a capable and experienced High Command. The army is exceedingly tough, lives and moves on a lighter scale of maintenance than any Western army, and employs bold tactics based largely on disregard for losses in attaining its objective.

“Equipment has improved rapidly throughout the war and is now good. Enough is known of its development to say that it is certainly not inferior to that of the great powers.

“The facility the Russian have shown in the development and improvement of existing weapons and equipment and in their mass production has been very striking. There are known instances of the Germans copying basic features of Russian armament.”

The assessment, signed by the Chief of Army Staff on June 9, 1945, concluded: “It would be beyond our power to win a quick but limited success and we would be committed to a protracted war against heavy odds. These odds, moreover, would become fanciful if the Americans grew weary and indifferent and began to be drawn away by the magnet of the Pacific war.”

Worse than the V-2

On June 10, 1945 Churchill replied: “If the Americans withdraw to their zone and move the bulk of their forces back to the United States and to the Pacific, the Russians have the power to advance to the North Sea and Atlantic. Pray have a study made of how then we could defend our island.”

To this, the generals said the Russians might attempt to attack the British Isles after they had reached the Atlantic, by cutting sea communications, invasion, air attack, and rocket or other new methods.

While the Channel would check an invasion for the time being, the British were worried about other threat scenarios. “It is possible the Russian Air Force would attempt to attack all types of important targets in the UK with its existing aircraft.”

Rockets posed the gravest threat. “The Russians are likely to make full use of new weapons, such as the rocket and pilotless aircraft….We must expect a far heavier scale of attack than the Germans were able to develop (such as the V-2 rocket),” the chief said.

The War Cabinet said it was beyond the capabilities of the 103 divisions of Allied troops in Europe to do what Napoleon and Hitler had failed to do. As Brooke noted in his diary, “The idea is of course fantastic and the chances of success quite impossible. There is no doubt from now onwards Russia is all-powerful in Europe.”

The British generals were finally able to make their holiday plans when a cable arrived from US President Harry Truman, saying there was no chance the Americans would offer help – let alone lead an attempt – to drive the Russians from Eastern Europe.

The Unthinkable file was closed.

Very early into the game, Stalin had got wind of what Churchill was up to. The Soviet dictator told his chief commander General Zhukov, “That man is capable of anything.” One of his spies in London had also passed on British plans for meddling in post-war Germany. Together with Truman’s nuclear-fuelled cockiness, Operation Unthinkable created suspicion and bitterness among the former allies. Operation Unthinkable was thus a catalyst of the Cold War.

Churchill’s patina of statesmanship is at long last coming off. The fact is he possessed an extraordinary range of prejudices. According to Hastings, in a memorandum to the war cabinet in November 1942 about policy towards Italy, he wrote: “All the industrial centres should be attacked in intense fashion, every effort being made to terrorise the population.”

Around the same time, he pushed for the firebombing of German population centres such as Dresden, Leipzig and Chemnitz which killed 200,000 civilians in 1945. It was the only way the British were able to announce they were in the war.

In 1944, Churchill okayed a “cataclysmic plan” to convert Germany into a “country primarily agricultural and pastoral in its character.” The Morgenthau Plan if implemented would have starved 10 million Germans to death in the first year alone. US President Franklin Roosevelt said Churchill was “bought off” after the Americans agreed to offer Britain $6.5 billion in Lend Lease. (After Churchill lost the election, the new Labour government rejected the plan.)

Such thinking was not new to a man who had knowingly and enthusiastically caused the Great Bengal Famine in 1942-43. By transferring vast quantities of foodgrain from India to Britain, he starved over four million Indians to death. Churchill was also keen on allowing Gandhi to die in prison. He once said: “I hate Indians. They are a beastly people with a beastly religion.”

In 1898 while mourning the death of a soldier friend, Churchill had remarked: “War is but dirty, shoddy business which only a fool would undertake.” Little did he realise he was describing a future British Prime Minister.