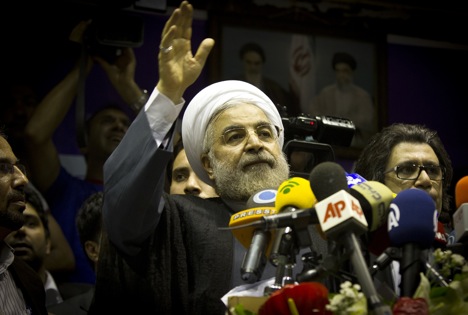 Rouhani’s priorities lie in working on Iran’s ties with the US and its Middle Eastern neighbours. Source: Photoshot

The Iranian president-elect made it clear during his election campaign that he intends to throw overboard the heavy ideological baggage in the policies and the diplomacy pursued by his predecessor.

India is taking its time to greet Iran’s president-elect Hojatoleslam Hassan Rouhani. On the other hand, the United States, which has no diplomatic relations with Iran, lost no time to hail Rouhani’s election victory and to reiterate its interest in “direct” talks.

The Russian President Vladimir Putin in his congratulatory message expressed confidence that Rouhani’s presidency will “further strengthen” the relations between the two countries and reaffirmed Russia’s expectation to cooperate in the “interest of regional security and international stability.”

What lies ahead for Iran’s foreign policies under Rouhani’s stewardship? The ideology-laden policies under his predecessor Mahmoud Ahmedinejad put primacy on Iran’s relations with the Asian countries and Russia and cast their net wide as far away as the Latin American continent to establish empathy with the Bolivarian revolution of Venezuela’s Hugo Chavez. Ahmedinejad plunged with great zest into the “anti-imperialist” struggle and was prepared to have a cup of tea with just about anyone who could be interested in the same ideological crusade.

Ahmedinejad was strident in his commitment to the resistance to “Zionism” as the core of his regional policies. His radicalism alienated and frightened Iran’s Persian Gulf neighbours, especially Saudi Arabia. This prevented Iran from harnessing optimally the shifts in the strategic balance in the Middle East as a result of the Arab Spring.

On the other hand, his controversial repudiation of Holocaust, although a part of propagandistic posturing, created a worldwide perception of the Iranian foreign policy being needlessly aggressive and provocative. This perception indirectly contributed to Iran’s isolation in the region and internationally and probably even hastened the transfer of Iran’s nuclear file from the International Atomic Energy Agency to the United Nations Security Council.

Rouhani made it clear during his election campaign speeches that he intends to throw overboard the heavy ideological baggage in the policies and the diplomacy pursued by Ahmedinejad’s government. Rouhani is a realist who senses the imperative need for Iran’s integration with the international community.

As he put it, “In the first step, measures should be taken to reduce the misunderstandings and unnecessary tensions in relations with the big powers and also regional powers. The priority of the foreign policy of my government is, first, to provide and maintain national interests through confidence-building measures and détente with the outside world.”

Rouhani’s priorities lie in working on Iran’s ties with the US and its Middle Eastern neighbours. He has no passion for Latin America’s leftist governments. The heart of the matter is that the Sunni-Shi’ite discord did not have to explode into such a flare-up of Iran-Saudi hostility. The US always tried to fish in the troubled waters of the Persian Gulf, which is a major market for its arms exports, but during the presidencies of Akbar Hashemi Rafsanjani and Mohammed Khatami, Tehran keenly strove to keep the ties with the Saudi leadership at an even keel – or at least, made sure that differences and tensions did not flare up into the kind of hostilities that are today visible.

Rouhani had a key role in formulating and implementing the regional policies during the presidencies of Rafsanjani and Khatami.

Equally, his nuanced approach to the normalization of Iran-US relations became evident when he was Iran’s nuclear negotiator under President Khatami. His return to the helm of affairs in Tehran will be seen as a positive development by the US.

Rouhani cannot but be conscious that the leitmotif of the handsome mandate he received in the election – winning by 50.7 percent vote in the first round itself – lies in the expectations of the Iranian people to find a solution to the severe hardships that the sanctions have imposed on their country’s economy, especially the high inflation and unemployment.

Put differently, Rouhani would realize that his mandate is about crafting wise, pragmatic, nuanced foreign and regional policies that would help the recovery of the economy and ameliorate the rising social discontent.

This is how Rouhani framed his thinking during a major interview recently: “The statements made by the Supreme Leader based on his consent to hold negotiations with the US while maintaining the ‘red lines’ has prepared new grounds to defend the rights of the Iranian people in direct diplomatic meetings with the US.

“The present conditions must be carefully analyzed and, if necessary, negotiation and bilateral dialogue with the US must not be abandoned. The first steps should be aimed at preventing the increase of pressures and stopping the trend of the present sanctions. During the next stages, the atmosphere must be balanced until the complete elimination of sanctions.”

Rouhani’s emphasis will be on direct dealings with the US negotiators, which will inevitably mean a dilution of the famous P5+1 process involving the other permanent members of the UN Security council.

In fact, Rouhani has spoken out that Tehran was unwise to depend on the “dual policies of countries like Russia, China and India at the international level,” whereby these counties merely used the Iran card to work on their bilateral ties with the US and strengthen their relations with the West by calibrating their “distance” vis-à-vis Tehran from time to time so that their relations with the West would not suffer.

In the same vein, Rouhani has spoken harshly about Ahmedinejad’s much-touted “Look to the East” policy. He said this policy only played into the hands of the countries of the “East”, by creating leverage for them to strengthen their own relations with the West. Of course, India or China have only acted in self-interest and their diplomacy has been very good at cherry picking what they needed from Iran with a clinical precision without giving away anything really substantial to Tehran in return, while making sure all the time they could extract leverage from the US for keeping their ties with Iran at a deliberately sub-optimal level.

Rouhani will try to douse as many of the fires as he possibly can that his predecessor lit – especially on account of the sectarian Shi’ite-Sunni rift, which in his opinion, has become “more destructive and disturbing than ever before” due to the “provocative measures taken by our surrounding powers and by others.”

Interestingly, Iran’s Arab neighbours in the Persian Gulf region have instantaneously warmed up to the news of Rouhani’s election victory. In an interview with the Saudi daily Asharq Al-Aawsat last week he said, “I plan to reverse the recently exacerbated [and] unfortunate rivalry between the two countries [Iran and Saudi Arabia] into mutual respect and mutually beneficial arrangements and cooperation to enhance security and restore stability in the region.”

Significantly, Rouhani added, “if elected, I will engage closely in diplomatic interaction and cooperation with all countries in the region to remove the clouds of misunderstanding and rivalry. In this region, our areas of common interests are much larger than disparate points of disagreement and contention. I will search for common grounds within our region and beyond to promote greater understanding and cooperation.”

All in all, countries such as India, Russia or China will do well to factor in the high probability of the Iranian ship under Rauhani taking a big arc in the choppy waters of the Middle East at a historic juncture when the region is in unprecedented turmoil. Of course, when a large ship takes a turn, it has to take a big arc and it will be a gradual process, which may not even be visible to the naked eye.