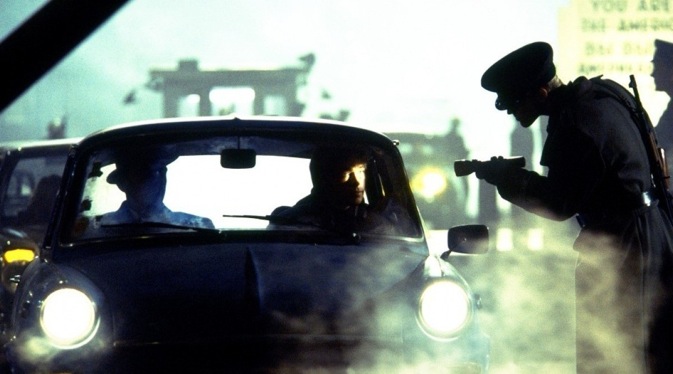 A still from the film Spy Game. Source: kinopoisk.ru

In the world’s second oldest profession, everyone is a legitimate target. But this time the spooks may have made one mistake too many.

In a meeting room that’s off limits to all but those having the highest security clearance, an elite group of aircraft designers and engineers is giving final shape to America’s newest and most expensive weapon – the F-35 Lightning stealth fighter.

Unknown to the employees at Skunk Works – Lockheed Martin’s secretive division – another group of people sitting thousands of miles away are watching their every move, monitoring each keystroke, recording every word spoken. These are hackers working for the Chinese military and they have been following the F-35’s development virtually in real time. Years before the American public is aware of the Pentagon’s latest toy, the F-35’s blueprints are sitting in downtown Beijing.

It’s not just the Lightning that’s been lifted. The Defence Science Board, a military advisory group, says China has purloined core elements of the United States military arsenal that include anti-missile systems, vital combat aircraft such as the F/A-18 fighter, the V-22 Osprey, the Black Hawk helicopter, and the Navy’s new combat ship.

Clearly, China is the new KGB.

However, China’s penetration of American industry, staggering as it is, pales before the scale of spying done by the National Security Agency (NSA). For, the “Never Say Anything” American espionage agency collects information not in gigabytes or terabytes but in yottabytes and exabytes – capacities that defy the imagination. The NSA, which makes the CIA look like a bank in comparison, is an outfit that has just one rule: Everybody that uses electronic communication is a target.

Espionage is a remarkably discrimination-free business in which everyone is a target. The globe-girdling American intelligence set-up, employing 854,000 spies, not only targets Iran, Russia and China but also snoops on allies such as Israel, Denmark, Finland, Britain and Sweden.

Israel in turn conducts extensive military and economic spying in the United States. The most celebrated example of fratricidal espionage was Mossad’s recruitment of Jonathan Pollard, a US Navy intelligence officer. In another instance, Mossad broke into the apartments of CIA agents in Tel Aviv.

There is a compelling reason for spying on friends – to make sure they are really on your side. It can have other spinoffs too. In the early 1960s a wiretap operation conducted by the CIA against the BND, West Germany’s foreign intelligence service, revealed the BND employed a senior Nazi war criminal, Franz Rademacher, in Syria.

Kim Philby, the KGB spy who singlehandedly wrecked Britain’s intelligence agency MI6, memorably said: “If one attempt in fifty is successful, your efforts won’t have been wasted.” NSA whistleblower Edward Snowden is that one spy in 50 who has damaged the Anglo-American espionage establishment at the global level.

The revelation that the NSA and the British GCHQ hacked into computers and phones of foreign leaders, including Russia’s Dmitry Medvedev, during the 2009 G-20 summit is turning out to be a complete PR disaster for the United States and Britain.

Although it is not unusual for intelligence agencies to target top level leaders, this is the first time someone has been caught in the act. It only goes to show that the much heralded reset with Russia is a charade. And the spying on Commonwealth leaders in London should alert developing countries like India to the real intent of the British, who are still dreaming about their lost empire.

The existence of an Anglo-American spy ring, which also includes Canada, Australia and New Zealand, has long been speculated. Whether these countries share intelligence data with their corporations is yet to be established, but if the past is any guide, then spying and commerce are not divorced from each other.

For instance, the 1973 assassination of Chile’s democratically elected President Salvador Allende was the direct result of two telephone calls by Donald Kendall, chairman of PepsiCo, to the company’s former lawyer, President Richard Nixon. In more recent times, BP (British Petroleum) has been revealed as one of the interested parties in the invasion of Iraq.

A big clue that espionage is the sharp end of the economic wedge is provided by Snowden’s revelation that Britain was looking for an edge during negotiations at the Commonwealth summit in London. Talk about cheating on home turf.

The good money is on an international backlash against the United States and Britain. The Germans are already calling for the “United Stasi of America” to put a leash on the NSA. According to John Villasenor, professor of electrical engineering and public policy at UCLA, “The NSA leaks will put wind in the sails of non-US intelligence services aiming to ramp up espionage targeting American businesses. Budgets for spying on American businesses will grow, and people to do the work will be easier to hire.”

Also, the Defence Science Board says the United States is not prepared to counter a full-scale cyber conflict. China’s ability to penetrate the world’s most secure communication system indicates the Board is spot on.

Clues to a changing world

In March 2013 the NSA picked up 9.6 billion pieces of information from India’s computer networks, making it the fifth tracked country in the world after Iran, Pakistan, Jordan and Egypt. The top four are all Muslim countries, with Jordan also a close ally, so it’s a no-brainer why the NSA is targeting them. But has the world shifted so much on its geopolitical axis that India is now a bigger target than Russia and China?

There are two possibilities. One, the Americans are making sure India remains on its side of the fence. Secondly, if the NSA has been able to steal more data from India than from Russia and China, it only shows how powerless developing countries are against well-equipped spy agencies.

Britain and US spied on Medvedev in 2009 - newspaper report

In “Crown Jewels: The British Secrets at the Heart of the KGB Archive” author Nigel West shows the extent to which countries will go to steal secrets. One summer day in Moscow during the 1950s, KGB agents were tailing the wife of the British ambassador who had been obtaining classified documents from a Russian, while on her daily ‘walks’ through Moscow’s streets. Realising she was being followed the ambassador’s wife tucked the documents in her underpants and tried to run towards the embassy.

She was caught, the documents were retrieved, and the British envoy predictably quit in haste.

Thanks to advances in communication, spies no longer have to steal documents in such comical fashion. Indeed, it is precisely because of the vulnerability of spies on the ground that the NSA has taken electronic eavesdropping to a new level.

Ultimately, is all the effort and expense of conducting espionage worth it? The KGB’s vast intelligence apparatus gave it a God’s eye view of the world but its intelligence bonanza didn’t prevent the Soviet Union’s demise. Whether such surveillance will stop the slow motion collapse of American – and by definition, Western – power remains to be seen.

But as long as there are nations, and nations have secrets, spies around the world won’t be complaining about not having enough work to do.