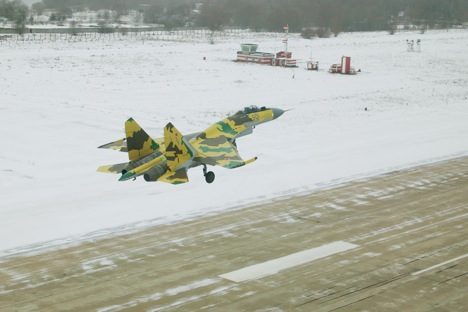 The Su-35 is clearly designed to take on stealth aircraft. Source: Sukhoi.org

The Su-35 is proving to be the latest scare word for Western air forces. Dubbed the UFO for its outstanding manoeuvrability, the Super Flanker is forcing America’s newest fighter, the F-35, to take evasive action.

Is the F-35 – described by the American military as the world’s most stealthy and most sophisticated fighter – a sitting duck for the Su-35 Super Flanker? Some believe that’s exactly right.

In July 2008 in a simulated dogfight involving an attack by Russia’s Su-35 against a mixed fleet of American F-22 stealth interceptors, F/A-18 Super Hornets and the F-35 Joint Strike Fighter, the F-35 was “clubbed like baby seals” by the Super Flanker.

The war game conducted at the US Air Force’s Hickam airbase in Hawaii, was witnessed by at least four Australian air force personnel and a member of Australia’s military espionage agency, the Defence Intelligence Organisation.

Australian Member of Parliament Dennis Jensen says a third party with knowledge of the final classified test results had told him the F-35 was comprehensively beaten in the highly classified simulation.

Sukhoi describes the Su-35 as a 4++ generation aircraft with some fifth generation – or stealth – characteristics. Its ability to shoot down stealth aircraft owes a lot to its super manoeuvrability. This is not something to be sneezed at as the Sukhois are now changing the rules of air combat, leaving Western air forces stuck with very expensive aircraft that could turn out to be clay pigeons.

Its engines enable the Su-35 to perform all kinds of stunts, including Pugachev’s Cobra, the Frolov Chakra, the Dead Leaf, and the unprecedented Pancake, which is a horizontal 360-degree made turn without losing speed.

Western analysts usually dismiss such jaw dropping moves, saying that when it comes to actual combat, stealth will carry the day, any day. Predictably, Lockheed Martin, which manufactures the F-35, parrots the same line.

Northrop Grumman’s DAS business development leader, Pete Bartos – who was part of the initial US Air Force JSF requirements team – says stealth was basic to the F-35 design and the reason that it did not need manoeuvrability. Rather than entering a turning fight at the merge, the F-35 barrels through and takes an over-the-shoulder defensive shot. As a Northrop Grumman video puts it “manoeuvring is irrelevant”

That’s missing the point entirely. According to Defense Industry Daily, “Stealth is very useful, but it isn't Harry Potter's invisibility cloak. These kinds of extreme claims aren't supportable. Qualification and restraint are less likely to insult the audience's intelligence.”

Indeed, while the United States – and its increasingly unconvinced and edgy allies – is stuck on stealth, the theory of air combat has been continuously evolving. “In the 1940s and 1950s, the first priority was height, then speed, then manoeuvre and then firepower,” Sergey Bogdan, Sukhoi’s chief test pilot, told Aviation Week. “Then with the third and fourth generation, it was speed, then height and then manoeuvre. Supermanoeuvrability adds to this. It’s the knife in the soldier's pocket.”

Don’t argue against the laws of physics

Bill Sweetman, a noted weapons expert, says the Su-35’s Paris demonstrations will be followed by a chorus of the usual suspects noting that “air show manoeuvres” don't equate to air combat capability.

“However, flight demonstrations are not aerobatic tricks,” he explains. “Unpredictable flight paths challenge the guidance algorithms of any missile system and rapid nose-pointing can permit a short-range missile launch with a greater kill probability.”

Where the F-35’s survival depends entirely on stealth – which leaves it vulnerable in a knife fight – the Su-35 is an all-round fighter packing lethal weaponry, extended range and of course legendary super manoeuvrability, which is the defining characteristic of the Flanker family.

In fact, shortly after wowing the crowds in Paris with the Su-35’s gravity defying stunts, Bogdan repeated a claim made in 1989 when the first Flanker performed the cobra manoeuvre. “The rapid change in velocity can cause a Doppler fire-control radar to break lock. The manoeuvre is more useful on the Su-35S because the pilot can fly the aircraft out in any direction,” he told Aviation Week.

According to Sweetman, the tactical advantage of this kind of manoeuvring mostly stems from the fact that any air to air missile has a predictive element. It's aiming where it thinks the target is going to be. That means the missile has to predict the aircraft’s flight path.

This is where the Su-35 excels. “If the aircraft is unpredictable, if it is capable of changing its flight path very suddenly and very dramatically, and if it is capable of doing this under control then it's much harder for the missile to do that,” says Sweetman. What it does is effectively reduce the missile’s range.

The F-35 pilot can take a shot but most likely it's going to miss. He therefore has to come closer, thereby not only revealing his location (assuming the Super Flanker's massive radars haven't painted him already) but also coming within range of the Super Flanker's amazing inventory of air to air missiles. (Russia’s Vympel holds the world record for the longest BVR – beyond visual range – kill at an astounding 400 km)

Go ahead, take that shot, make my day

Sweetman say the Su-35 is clearly designed to take on stealth aircraft. The American theory of stealth combat rests on “First look, first shot, first kill”. With the Super Flanker, the Russians have upended that grandiose theory. The F-35 may still have the first look – that is, it may detect the Su-35 first – but it has to come closer to take that ominous shot. That’s when the Super Flanker and the F-35 can both see each other. “The advantage of stealth has been markedly reduced,” says Sweetman.

At that point, the Super Flanker, with its preternatural ability to fly in slow motion or engage in bursts of supersonic speed, becomes the hunter. With its maximum speed of Mach 2.5, a high altitude range of 3600 km and 12 Vympel missiles, it is more than a handful for an F-35 pilot with a range of just 2222 km and a top speed of Mach 1.6 which almost seems like a death wish.

Indeed, where the F-35 offers extravagant technologies that seem completely irrelevant to the needs of most air forces, the Super Flanker offers performance on a par with 5th generation fighters.

What’s even scarier from the Western air forces’ point of view is their future stealth fighter is vulnerable today before they have even had a look at the F-35. And sometime around 2020 Sukhoi’s PAK-FA stealth fighter comes into service.