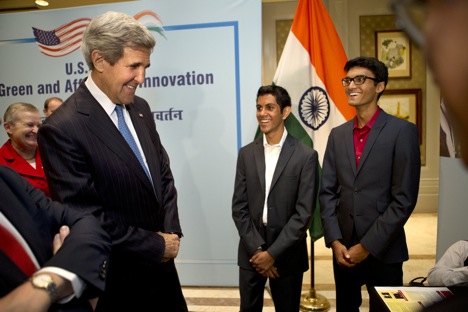 Kerry hastily clarified, “Obviously, India is not going to interfere” in the forthcoming election leading to a political transition in Afghanistan. Source: AP

Delhi is far from certain that the Taliban are anywhere near bidding farewell to arms and morphing into a political platform willing to share power.

The visit by the United States Secretary of State John Kerry to Delhi earlier in the week brought into focus the divergences that appeared lately regarding the Afghan situation against the backdrop of America’s peace talks in Doha with the Taliban.

On the eve of Kerry’s arrival, Delhi took the unusual step of making it clear that apropos the differences that cropped up between Afghan President Hamid Karzai and the Obama administration regarding the Doha talks, its sympathy lies with Kabul. To be sure, India expounds the imperative need of an inclusive Afghan-led, Afghan-owned peace process and takes it very seriously that the “red line” that the international community prescribed as the basis for any reconciliation with the Taliban should not be fudged – namely, the Taliban ending their long-standing ties with the al-Qaeda, bidding farewell to arms and respecting the Afghan constitution and, of course, jettisoning their past practices of human rights abuse.

Delhi is far from certain that the Taliban are anywhere near bidding farewell to arms and morphing into a political platform willing to share power. Nor does Delhi share the enthusiasm voiced by senior US officials that there is a genuine shift in the Pakistani policy. Woven into all this is the deep concern that India’s national security interests might be jeopardized if the US strikes a deal with the Taliban in self-interest that might overlook its concerns.

In the event, External Affairs Minister Salman Khurshid stressed after the talks with Kerry on Monday that Delhi is determined to be “on the same page” with the US and is willing to accept that the Doha talks are essentially an “experiment” in the search for “sustainable peace” in Afghanistan. Equally, Khurshid signaled that Delhi accepts the assurance given by Kerry that if and when the Doha talks proceed – and he conspicuously stressed the ‘if’ – the US “will ensure that none of the concerns of India are overlooked or undermined.”

Indeed, Khurshid added the caveat that “time will tell” how the shared objective of India and the US in stabilizing Afghanistan and bringing about durable peace can be realized. He also indicated that Delhi conveyed to Kerry its apprehensions. All in all, Khurshid hinted at a willing suspension of disbelief in the best spirit of the US-India “defining partnership.”

Kerry on his part offered to “consult very closely with India and with others in the region” and that the US special representative on Afghanistan and Pakistan would visit Delhi “in order to brief officials directly.” Significantly, he added that the talks with the Taliban will take place only “under certain conditions. Thus far those conditions have not yet been met. So, there is no negotiation at this point. If the conditions are met, then there is a negotiation that will take place not with the United States but with the High Peace Council of Afghanistan.”

Kerry affirmed categorically that the “conditions” are not going to change – “And if it is required to change, there obviously won’t be an agreement.” But then, he also introduced an element of ambiguity by saying, “But it is better to explore the possibilities of having a peaceful resolution and inclusion in a political process if it is possible. Ultimately, that will be decided by the Afghan people through this negotiation or it will be decided at the ballot box in 2014 without the Taliban… So, we [US] hope is that this [Doha process] could provide an avenue for the reduction in violence. But there is certainly a course that we are committed to, if it does not.”

What does it all add up to? Conceivably, Washington will not foist the “red lines” as a precondition for the Doha talks but thinks it good enough if they emerge as an outcome of the talks.  Second, the US is not going to be deterred from the Doha talks but is willing to keep India in the loop.

Third and most important, the US sees only a limited political role for India in the Afghan transition as such, restricted to rendering “technical assistance” to Kabul to hold the presidential election due in coming April so that the election becomes “accessible, accountable, transparent, free and fair.” Kerry hastily clarified, “Obviously, India is not going to interfere” in the forthcoming election leading to a political transition in Afghanistan.

Plainly put, Kerry suggested that “whatever India can do in its relationship with President Karzai” should be confined to persuading him to vacate the presidential palace peacefully by holding a credible election in April that has the “five qualities” of transparency, freedom, fairness, accessibility and accountability.

This will come as a bitter pill for the Indian pundits who fancy a larger-than-life role for Delhi in the Afghan endgame. What emerges from Kerry’s talks in Delhi is that while the US will do what is realistically possible to pay heed to India’s legitimate security concerns, it will not be held hostage by Delhi from pursuing the chosen path leading to Doha in league with the “core players” – as a top US official recently identified – namely, Afghanistan, Qatar and Pakistan.

It is a ‘take-it-or-leave-it’ offer from Kerry, which Delhi can ill afford to reject. Indeed, Prime Minister Manmohan Singh is due to visit Washington in September and it will be his last official trip to the US and this is not the time to allow a clutch of divergences over the Afghan endgame to spoil the party.

Besides, Delhi would know that the Obama administration has embarked on the Doha track with deliberation and will not be deflected from this path, as time is running out for the drawdown of the NATO troops in Afghanistan and the conclusion of the status of forces agreement concerning the establishment of nine American military bases, which is a crucial template of the US’s “rebalancing” in Asia.

At any rate, India’s capacity to influence the reconciliation process with the Taliban is very limited. At best it can only appeal to the US’ goodwill. Paradoxically, India’s trump card in Afghanistan has been its wonderful equation with Karzai, but then, the US’s principal objective in the coming ten-month period is to ensure that the Afghan leader relinquishes his job and walks into the sunset so that a fresh start is possible in Kabul. As for the erstwhile Northern Alliance groups, they no longer eat out of Indian hands and have dealings with other benefactors, including the US and Pakistan.

The fundamental contradiction in the Indian policy is that Delhi views the stabilization of Afghanistan as a paradigm of regional security and stability, whereas for the US it is a necessary phase for the advancement of its “rebalancing” strategy in the south-west Asian region bordering China, Russia and Iran.

Clearly, if Washington has a fighting chance to make a success of the Doha process, it will be thanks to the helping hand of the Pakistani military. Kerry broke protocol and held two one-on-one meetings with the Pakistani army chief Ashfaq Kayani, which only opened the door leading to the path to Doha. Besides, Pakistani military’s full cooperation is an absolute prerequisite for the US at this point to ferry the war equipment out of Afghanistan through the transit routes connecting Karachi Port. Nor has the US any option but to tap into Pakistani transit routes for supplying its nine military bases in Afghanistan on a long-term basis.

India, on the contrary, regards the Pakistani military as part of the problem. Indeed, Kerry did some exceptionally brilliant tight-rope walking by persuading the Indian officials to come to terms with the Doha talks. But he never once said an unkind word about Pakistan’s links with extremist groups and he clean forgot to condemn the terrorist strike in Jammu & Kashmir killing 8 Indian troops on Monday.

Washington now proposes to resume the US’s Strategic Dialogue with Pakistan, which has been suspended for the past 3 years. Islamabad would be pleased that the US treats Pakistan on par with India.