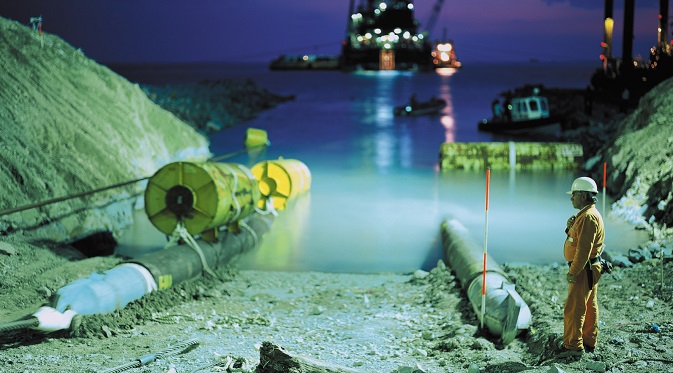 Nabucco was the lynchpin of America’s grand strategy to isolate Russia, but in the end the hunter became the hunted.

The covert energy war for domination of Caspian energy has ended in a humiliating defeat for the West, with the American midwifed Nabucco pipeline being stillborn.

Nabucco failed because it was a political pipeline. The $31 billion gas bridge was conceived to detach Central Asia from Russian influence. This gigantic pump was designed to divert 30 billion cubic metres of gas (nearly 10 percent of Europe’s annual consumption) away from Russian pipelines.

Egged on by the United States, the Europeans began to have fantasies about dirt cheap energy from a region floating on a sea of oil and gas. Like small minded shopkeepers they forgot that barring the 2006 spat with Ukraine, the Russians had been reliable suppliers of Siberian gas for over 30 years.

However, the Russians had the foresight – and the diplomatic muscle – to see the project fail. In June 2009 when the Europeans were about to ink an agreement on Nabucco, a leading Moscow-based commentator ridiculed their “chaotic chanting”.

Alexander Knyazev, director of the regional branch of the Institute of the CIS, said the support for the project reminded him of the haunting chorus of Hebrew slaves from Verdi's opera – “beautiful, yet altogether gloomy and hopeless”.

It was an eerily prescient remark.

Washington's geopolitical bible is "The Grand Chessboard: American Primacy and its Geostrategic Imperatives". In this misguided tome, former US National Security Adviser Zbigniew Brzezinski says by creating instability in every country in Russia’s neighbourhood, especially in the Central Asian stans and Ukraine, and disrupting the flow of oil and gas, the US can isolate Russia, so that Moscow ceases to be a great power.

Brzezinski openly espouses provoking instability by exploiting the ethnic and religious diversity of the region. The term "Arc of Instability" came into use in the1970s to refer to a 'Muslim Crescent' extending from Afghanistan to the stans in the southern part of the former Soviet Union.

Nabucco was one of the ways the United States tried to turn this baleful fantasy into reality.

Russia steps on the gas

Nabucco was actually the West’s Plan B. The original pipeline envisaged bringing gas from Turkmenistan and even arch enemy Iran. However, the problem was Turkmenistan never seemed to make up its mind.

It doesn’t take a petroleum scientist to guess that Russians may have applied pressure. But what finally made Turkmenistan cry off was the sharp increase in instability in neighbouring Uzbekistan after the country opened up to Westerners. Wisely, the Turkmens decided all the petro dollars in the world weren’t worth it if it meant Western meddling in their internal affairs.

Europe and the United States now decided to skip Turkmenistan altogether and instead decided to start in Azerbaijan. The new section was named Nabucco.

The problem now was that the pipeline had lost its main objective – to cut the Central Asian republics loose from Russia. So a new raison d’être was found. Nabucco was, said its backers, the key to weakening Russian influence on Europe by reducing dependency on Siberian gas. In reality, the West was spending a fortune on advertising a rank bad product.

Because Nabucco’s sole purpose was to eat Russia’s lunch, the Russians went after it with a vengeance. Firstly, like a giant sponge, the Russian gas conglomerates soaked up all available natural gas in Central Asia and the Caspian to deny supplies to Nabucco. Secondly, in 2007, Vladimir Putin unveiled – or rather unleashed – South Stream.

South Stream is a $39 billion competing pipeline crisscrossing Russia, Bulgaria, Serbia, Hungary, Slovenia and Italy that would carry gas to Europe. Importantly, the pipeline would bypass troublesome Ukraine, which seemed to be doing exactly what the United States wants – block Russian gas.

Then with the speed of a mechanised column – and against very obstacle put in its way by Eastern European nations – the Russians, with German backing, built Nord Stream. This 1222 km natural gas pipeline transports gas from Vyborg in northern Russia to Greifswald in Germany. Again, it bypassed the Baltic countries, thereby removing any possibility of disruption.

Nord Stream was crucial to Russia’s energy strategy because it demonstrated to Western Europe – its main gas consumer – that Moscow was serious about ensuring uninterrupted flow of energy to Europe. It deflated allegations that Russia wanted to strangle Europe.

Putin’s Stream strategy paid off. As Nabucco kept getting shorter, newer and more nimble players saw an opportunity and jumped in. Finally, the Trans-Adriatic Pipeline (TAP) got the nod. Because TAP can only transport a third of what Nabucco planned to, it doesn’t pose a threat to Russia’s interests.

The very nature of a gas war makes it an extremely high stakes affair. Because gas pipelines are so expensive to build and cannot be rerouted (like ships), it is normal for buyers and sellers to ink long-term – often 20-30 year – agreements. This brings together producers and consumers as well as transit countries in a sort of pipeline alliance. Because all transit nations get a fee from the pipeline owners, there is every reason for them to have stables relations with one another.

For the Americans, that is bad news. Russia’s linkages with German, for instance, deepened after Moscow built the Siberian natural gas pipeline into the heart of Europe in the 1980s. That pipeline was built despite immense American pressure to scuttle the project.

No.1 United States; No.2 Turkey. Having outsized geopolitical ambitions, Turkey was hoping to draw the Central Asian Stans away from Russia into a Turkic embrace.

Plus, by becoming the main transit hub of Central Asian gas to Europe, it hoped to cozy up to Europe, which has rebuffed all attempts by Ankara to enter the European Union. Germany and France have made it abundantly clear that Europe ends at Turkey’s border. With Nabucco, Turkey was hoping to redraw that line.

The Turks were among the biggest cheerleaders for Nabucco as they were expecting a $680 million transit fee. That annual bonus is not coming back.

While the crystal would surely be clinking in the Kremlin, what remains to be seen is if South Stream would proceed as planned. In the near future, the bulk of Russian gas is destined to go east, not west. It is Asia’s ravenous economies, especially China’s, that will sustain tomorrow’s energy industry, while Europe is still on its knees.

No new European deals are in sight currently but Russia has entered into a 25-year gas contract with China, for which Beijing will pay an unprecedented $60 billion advance. In this backdrop it remains to be seen if Europe gets the leftovers or whether it regains its place in Russia’s export strategy.

As for the United States, the Nabucco wipeout, coming shortly after the global spying expose, is a taste of things to come in an increasingly multipolar world.