US’ viable “zero option” for Afghanistan 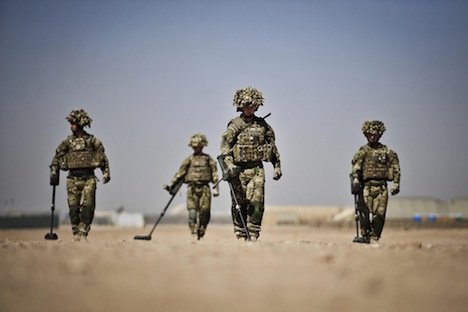 So long as Washington tries to shove its geopolitical agenda down the Afghan throat, it will continue to meet with rebuff. Source: PA Photos / Ben Birchall / ITAR TASS

Washington is hell-bent on establishing military bases in Afghanistan in terms of its so-called “rebalancing” strategy in Asia.

The New York Times reported over the weekend that President Barack Obama is seriously considering a “zero option” for Afghanistan, namely, a total pullout of American troops by end-2014 – lock, stock and barrel, as they say.

Sounds incredible? Indeed, it does at this point, when Washington is reported to be in the final stages of negotiation for concluding a status of forces agreement [SOFA] with the Kabul government to establish nine military bases in Afghanistan.

Hundreds of millions of dollars have already been spent to renovate some of those bases where American soldiers would eventually stay.

But the Times report is attributed to the paper’s ace reporters and it mentions conversations with American and European officials and, interestingly, the White House has not cared to contradict the report.

Assuming, therefore, that the report has solid basis, what could be the factors prompting Obama to veer round to the “zero option”?

Conceivably, Obama feels peeved that the SOFA negotiations remain suspended. Afghan President Hamid Karzai called off the negotiations and linked the SOFA with the commencement of talks between the Taliban and the Afghan government in Doha. He added in good measure that the Americans were not being transparent by dealing directly with the Taliban and leaving him out in the cold.

The Taliban, however, want to deal with exclusively with the Americans and insist that the Karzai government is a mere American contraption. The Times report hints that Karzai’s real motives are hard to fathom and he could also be precipitating a crisis to create an alibi in order to scuttle the presidential election in April so that he could continue in power.

In the US perception, what lends credence to such an interpretation of Karzai’s motives is that the preparations for the 2014 poll are already falling behind and he does not seem to be in any hurry.

Obama likely intended the threat of “zero option” as a “shock therapy” to Karzai so that he falls in line. But, on the other hand, this could be more than a mere “psywar” and Obama could be dead serious about the “zero option”. The point is, a few thousands US troops can and will stay in Afghanistan only if the SOFA is in place.

In turn, the SOFA, which Karzai is holding up, becomes the crucial input for Obama to make his decision as to the scale of US troop commitment beyond end-2014. The Pentagon would be pressing the White House to take a decision – any decision – so that the planning and logistics could be fleshed out in the 18-month period ahead.

Having said that, paradoxically, the SOFA becomes meaningless and the US bases in Afghanistan become untenable unless there is also an understanding reached with the Taliban that they will not attack the American troops. The Doha talks were ultimately to lead to a ceasefire. And Obama feels frustrated that Karzai is undercutting the commencement of the Doha talks.

But then, as things stand, Taliban would expect the US to reciprocate by recognizing them as a legitimate Afghan group with a claim and a right to hold power in Kabul. And the Taliban include the Haqqani Network also, which figures in the US’ list of international terrorists.

Unsurprisingly, Obama is at the end of his tether trying to work his way out of the labyrinth. The crux of the matter is that the entire US strategy is riddled with contradictions.

The Times report makes it out that the US is doing a favour to Afghanistan by establishing the bases in that country. On the other hand, it also holds out a veiled threat that if Obama chooses to exercise the “zero option”, it will also have a bearing on the quantum of US assistance for Afghanistan in the coming years.

There is a glaring contradiction here. Why should the US punish Afghanistan for not allowing it to establish the bases, if the US is only doing the Afghan people a favour by having such bases in their country?

The Times report says Karzai is insisting on a SOFA provision for security guarantee from the US in the event of Afghanistan’s sovereignty and territorial integrity being threatened. Whereas, the US apprehends that such a guarantee might drag it into the Afghan-Pakistan tensions.

But then, doesn’t Kabul have the right to expect something out of SOFA by allowing the establishment of the US bases? Of course, Pakistan is the main security threat for Afghanistan. Who else – the Central Asian states?

What cannot be hidden anymore is that the US is hell-bent on establishing military bases in Afghanistan in terms of its so-called “rebalancing” strategy in Asia (and in its own interests of “homeland security”) and is now threatening Kabul that unless it could have its way on its own terms, the American assistance will be curtailed.

Again, if the stabilisation of Afghanistan were the real US objective, Washington could have gone about achieving it differently. For instance, there is a 3-year old standing offer from Russia that the North Atlantic Treaty Organization [NATO] could associate the Collective Security Treaty Organisation [CSTO] with its efforts to stabilise Afghanistan. But then, Washington will not have anything to do with CSTO.

There is a contradiction. The US and NATO have failed to win the war and ideally should welcome cooperation from all quarters to try and stem the tide. But then, cooperation with the CSTO would virtually block the NATO from expanding into the Central Asian region.

In sum, the problem Obama is grappling with is that he is pushing the US’ geopolitical agenda, whereas Karzai’s priority lies in the stabilisation of his country. Obama’s “zero option” message means the following: ‘Allow us to have nine military bases, or else we will quit and leave you to the wolf.’

But such blackmail won’t work with the Afghans who have lived for centuries without having heard of Columbus or North America. And they have a way of life – with or without the Americans and their 8 billion dollars.

So long as Washington tries to shove its geopolitical agenda down the Afghan throat, it will continue to meet with rebuff. It is only through genuine intra-Afghan dialogue that a durable settlement can be worked out. Such a process needs to be “Afghan-led” and “Afghan-owned”.

The role of the international community in the peace talks should be confined to that of a facilitator. Within such a matrix, evidently, there is no need for any American military bases in Afghanistan – nor of SOFA or NATO advisers. In fact, “zero option” can become Obama’s most viable option.