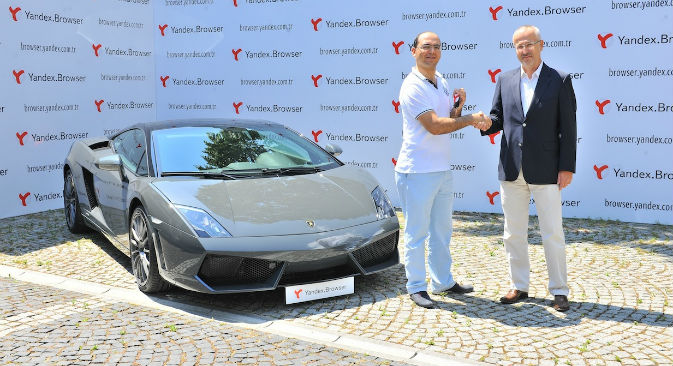 A Turkish user recently won a brand new Lamborghini, courtesy of the Russian online company Yandex. Erkan Kiyak from Gaziantep, Turkey, participated in the local promotional campaign for the new Yandex.Browser and received a Lamborghini Gallardo LP560-4 Coupe worth $200 thousand as a prize. The happy winner, however, had to pay almost $46 thousand in taxes. Read more in Russian on startupafisha.ru

As reported by Techcrunch, Russian restaurant app Gvidi launched its US version. The app, defined by its creators the “intelligent restaurant guide” was featured by RBTH in the Summer edition of Russian Startup Rating released earlier in June. According to Gvidi representatives, the app’s database now include almost 1.2 billion places in the U.S. Read the full story here and download the app from the App Store - we look forward to hearing what you think of it.

According to a report by East-West Digital news, the Moscow Seed Fund invested $240.000 in local traffic monitoring service Probki Iz Okna (traffic jams from the window).  The concept behind the project is the creation of a network of webcams on users’ windows to monitor the traffic conditions in Moscow and other Russian cities in real time.

MoeDelo, PwC and RVC just launched One2start.ru, an online service to help young start-ups to succeed.  East-West Digital News spoke with PwC’s Manager for Marketing and Corporate Communications Olesya Kuzminskaya, who was quoted saying: “We helped develop the concept, the ‘Startup Roadmap’ navigation tool, and a number of materials, from financial model templates to investor presentations and teasers.” The service also provides 24 hour consulting service with experts and industry professionals.

Ostrovok.ru cuts a third of its staff