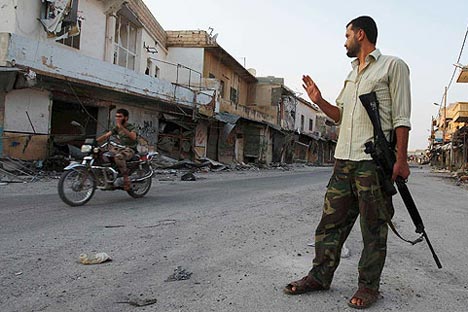 Syria is an opportunity for Russia to make amends for sacrificing two of its major clients in the Arab world – Iraq in 1991 and Libya in 2011. Source: Reuters / Vostock Photo

Russia’s reliability as an ally rests on whether it can secure Syria, whose future as a free nation is at stake.

Not since December 1971 has Russia jumped into the combat zone to defend an ally as it is doing in Syria now. That wintry fortnight more than 40 years ago, while the Indian military was fighting a two-front war against Pakistan, the Russians dispatched a formidable armada of nuclear attack submarines and warships to prevent a joint American-British attack on India.

Like Syria today, India too was caught up in a nightmarish scenario. Almost the exact bunch – the United States, UK, UAE, Turkey, Jordan and France – which is promoting genocide in Syria, were in 1971 supplying Pakistan with weapons to fight India and commit genocide against its own Bengali population. At the same time, Washington was pushing China to attack India across the Himalayas, just as it is now encouraging the likes of Saudi Arabia and Qatar to increase the level of terror in Syria.

Treaty bound to defend India, Russia deployed the full-spectrum of its diplomatic and military powers. The payback wasn’t just tremendous Indian goodwill; Moscow’s popularity in the Middle East rose dramatically after that war. The intervention was also timely because around the same time the United States was secretly opening up to China through Pakistan’s brokerage.

It is Moscow’s 1971 moment all over again. If Russia doesn’t fight the West’s hired guns in Syria, it will soon be fighting them on the shores of the Black Sea. It’s as simple as that. For, the fundamentalists won’t stop at Damascus; like a virus they will spread towards Russia’s borders.

Syria is the last of the Arab states holding out against the West. It is also the missing link in a collection of American client states and allies in the region, extending from Saudi Arabia in the south to Turkey up north.

Russia has drawn several red lines on Syria – no regime change, no arms embargo, no UN resolutions condemning President Bashar al-Assad. But there was an unstated red line which was crossed – by Saudi Arabia – which perked up the Kremlin’s antennae.

Saudi Arabia’s unrestrained backing of hardcore terrorists in Syria proves the kingdom is playing the same perfidious game that created the Mujahidin. The Afghan Mujahidin – the granddaddy of the al-Qaeda and the Taliban – was a successful Saudi-American project directed against Russian forces in Afghanistan. Moscow cannot afford to allow a similar Saudi-American alliance to sting it in Syria.

Moscow – along with Beijing – has used its veto power to block the West from overrunning Assad. Clearly, Russia has learnt from its blunder in Libya, where it gave the West a free hand. As Russia’s Foreign Minister Sergei Lavrov said: “We have had civilians protected in Libya and know the results.” After Libyan leader Muammar Gaddafi’s brutal assassination, Russia has said thanks but no thanks to the kind of ‘democracy’ that has been foisted on the people of Libya.

The double veto has had the desired effect of neutralising the United States. Unable to rain rockets on Damascus, the White House is using sanctions to pressure Assad, while leaving dirty tricks to its henchmen in Assad’s backyard. “We are leaving the matter in Turkish hands; a hazardous, but necessary, course of action,” retired Army Colonel Doug Macgregor, a former military planner-turned-consultant, told the US News & World Report.

It is a measure of how effectively America has been countered that it has outsourced its Middle East policy to Turkey, which has proved to be a rank amateur in the Great Game vs Russia.

Syria is also an opportunity for Russia to make amends for sacrificing two of its major clients in the Arab world – Iraq in 1991 and Libya in 2011.

Depending on which way you look at it, Iraq was either a strategic blunder or a brilliant Kutuzovian retreat. A blunder because Iraq was not only a friendly state, it was also a huge buyer of Russian weapons and machinery. At the same time, America’s Middle East misadventure dramatically changed the perception of the United States and Russia in the Muslim world.

Where earlier Moscow was the HQ of godlessness, the Iraq War became a huge – and continuing – PR disaster for the United States. It depleted Washington’s treasury to the tune of $2 trillion and counting. Hundreds of billions of dollars worth of military gear is being abandoned in Iraq. The American military is increasingly suffering from combat fatigue and rampant drug addiction, while the killing of civilians in Iraq and Afghanistan is turning world opinion against it.

But since the existence of a modern Kutuzov in the Kremlin isn’t yet confirmed, it has to be assumed that Russia played no part in America’s Iraq fiasco. It was just a case of American hubris.

At any rate, there is no reason to assume the West will make the same mistakes in Syria. Instead of a direct invasion of the country, it might organise a prolonged guerrilla war that could eventually wreck the country. Fat cats Qatar and Saudi Arabia have limitless funds to bankroll such a war.

Russia has reasons to be wary of fundamentalism exporting Saudi Arabia and cocky Qatar. Flush with easy-earned petrodollars and living under the protection of the United States, Qatar has become an active player in the Middle Eastern version of the Great Game.

Qatar poses a huge threat to Russia’s gas markets in Europe. The Qatari rulers have long dreamt of a gas pipeline from the sands of Arabia to Europe. Syria is the last segment of the jigsaw puzzle of nation states through which the pipeline will roll. Sitting on gigantic reserves, the Emirate could flood Europe with Middle Eastern gas, leaving Russia a distant No.3 after Norway and Qatar.

Commerce is one thing, but to destroy a country in order to run a pipeline through it is nothing less than genocide. Countries have gone to war for far less.

Russian restraint is past its use by date and it may finally despatch the formidable S-300 missiles to Syria. It will also receive Yakhont anti-ship missiles, which will ramp up the country’s capability to protect its Mediterranean coastline and check the smuggling of weapons via the sea route.

Further, the Russian Defence Ministry has announced it will establish a permanent naval task force in the Mediterranean Sea. Russian Navy Commander Admiral Viktor Chirkov announced earlier this month that the Mediterranean task force will have six warships and support vessels. Also on their way are Russian nuclear submarines – a striking parallel to 1971 no doubt.

We are clearly living in bizarre times. Who could have guessed the West’s beacons of democracy would arm hardcore Islamic terrorists including the al-Qaeda, which incidentally was the prime target of the so-called War on Terror?

Russia, more than any other country in the world, can stop the West’s bizarre experiments in statecraft. While national interests are worth securing, Russia must intervene in Syria to protect something far more valuable – a truly secular society, which has bucked the Middle Eastern penchant for fratricide and ruin.

Assad’s Syria is a secular oasis where people of diverse faiths – the spiritual Alawites, the mystic Druze, Christians, Shias and Sunnis – live amicably together rather than in segregated ghettos. The United States, Gulf & Co now wants to turn it into a place where daily bomb explosions are the rule, as in another country recently democratised by the West – Iraq.