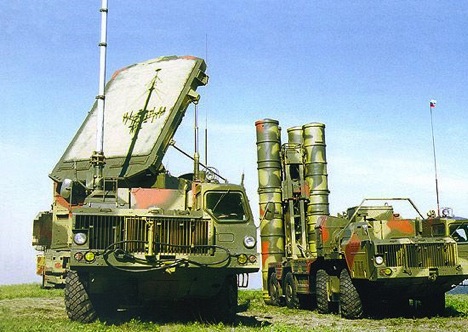 An S-300 missile fired from Damascus will blow away an aircraft over central Tel Aviv in about 107 seconds, giving the Israelis virtually no reaction time. Source: Ministry of Defence of the Russian Federation / mil.ru

The S-300 surface to air missile is vital for Syria’s air defences, but Moscow is wary of the complications the weapon could create – both for itself and the Middle East.

Israeli warplanes have attacked targets in Syria with such regularity this year that Syrian airspace is beginning to look like Swiss cheese.

Because the older generation of surface to air missile (SAM) systems in Syria’s inventory is unable to stop the Israelis, Syria is desperately seeking the advanced – and much delayed – S-300 missile.

SAMs have caused heavy attrition of enemy aircraft and missiles in several conflicts. Russia’s SA-2 and SA-6 missiles as well as Israel’s Iron Dome are the classic examples.

The legacy of the venerable SA-2 and SA-6 missiles continues through their modern successors, including the S-300, S-400 and the astounding S-500. Because it can directly as well as indirectly influence the outcome of a war, the new generation Russian SAM is considered a strategic weapon. This is remarkable for a non-nuclear missile.

Indeed, it is a measure of the S-300’s fear factor that both Israel and the United States are strongly against its sales to Syria and Iran.

The S-300 has impressive DNA – it is a development of the S-75 missile that famously shot down the U-2 spy plane over Russia in 1960, and embarrassed the Eisenhower administration.

Weaponised in the 1970s to replace the first generation SAMs, the S-300 is an easy to use, fire-and-forget road mobile system designed to repulse massive air strikes. With a range of 5-150 km, the system can track up to 12 targets and engage six of them separately. In terms of accuracy, the Russians claim a single shot kill probability of 80-93 percent against aircraft.

No existing aircraft can outrun the missile which travels at 7200 km/h and has a maximum altitude of 98,000 ft. Also, the latest versions of the S-300 can hit aircraft and missiles flying as low as 20 ft – from above.

Unlike the American Patriot, which was hyped as a Scud killer but was in fact a resounding dud, the Russian missile actually works. According to Boris Bunkin, the chief designer of the S-300, Desert Storm demonstrated it is not enough to hit a ballistic missile and cause it to lose trajectory; it is important to destroy its warhead. Bunkin solved this problem. His team conducted tests involving live Scud missiles, demonstrating the S-300 effectively destroys warheads at the point of interception.

Robert Hewson, editor of IHS Jane's Air-Launched Weapons, describes the S-300 system as formidable and respected by Western military planners: “If your plan is to waltz into Syrian airspace and start bombing things, this is a big wrinkle.”

The missile also has a narrow radar beam, which is not only difficult to detect but hard to jam. To be sure, the S-300 is not completely immune to electronic countermeasures, an area in which Israel excels. In 1982 Israeli aircraft destroyed 19 Syrian missile batteries after blinding them electronically.

Contrary to media reports, the S-300 is not a standalone “game changer”. It becomes deadly when used alongside anti-aircraft artillery (AAA) and fighter aircraft. By dominating high altitude air space, SAMs drive enemy aircraft down into a “flak trap” where AAA batteries and air defence fighters await them.

Countries that integrate this three-tier system – SAMs covering higher altitudes, AAA protecting the lower altitudes and air defence fighters patrolling the space in between – can significantly increase the costs for attacking air forces.

A look at a couple of conflicts in which these missiles helped user countries achieve near strategic parity with more powerful forces will help understand what the fuss is all about.

Vietnam: Unsafe at any height

The Vietnamese organised what was perhaps the most sophisticated and effective anti-aircraft defence in the history of warfare. “It was a multi-level, dynamically integrated defence that included radar warning systems, MiG jet fighters, SAMs, AAA of various calibers and small arms fire,” writes Vietnamese General Van Tien in the book American Failure.

As soon as US aircraft entered this aerial meat grinder, Vietnamese army radars vectored MiG fighters to intercept the attacking bombers and their fighter escorts. The information was also passed on to SAM command centres.

In order to counter the SAMs, US aircraft started using electronic countermeasure devices on their wingtips. This reduced the planes’ manoeuvrability and made them more vulnerable to MiG attacks.

“When a SAM was actually coming at them, pilots performed a tight turning dive to outmanoeuvre the missile, but this tactic had the undesirable effect of bringing them down again into the range of AAA,” writes Robert Dorr in Air War Hanoi.

Between 1964 and 1973 the Vietnamese AAA alone downed 740 US Air Force fighter aircraft. They also shot down hundreds of helicopters, several F-111 fighter bombers and 15 irreplaceable B-52 strategic bombers. The B-52s were lost despite the use of electronic jamming aircraft, defence suppression aircraft and fighter escorts. Interestingly, after the Vietnamese ran out of SAMs the USAF did not lose any more B-52s.

In the 1973 Arab-Israeli War, Russian crews operating SA-2 and SA-6 missiles employed the same tactics as the Vietnamese – by denying Israeli aircraft the use of high and medium altitude airspace, the SAMs forced enemy aircraft down into Arab AAA range. The Israelis admit they lost 303 aircraft. The actual number is probably higher.

Military analyst Sharad Joshi writes in the paper, Israel’s Nuclear Policy: A Cost-Benefit Analysis: “The same Israeli Air Force, which had practically demolished the entire Egyptian Air Force in the first few hours of the 1967 war, was neutralised for the early part of the 1973 war.”

If – or when – the S-300 arrives in Syria it will be a landmark moment. For the first time in the history of the Middle East, an Arab nation will have the ability to shoot down Israeli aircraft over Israel. An S-300 missile fired from Damascus will blow away an aircraft over central Tel Aviv in about 107 seconds, giving the Israelis virtually no reaction time.

To the Israeli Defence Forces, this is an unacceptable escalation. Israeli Defence Minister Moshe Yaalon warned: “The shipments haven’t set out yet and I hope they won’t. If they do arrive in Syria, god forbid, we’ll know what to do.”

Russia’s Deputy Foreign Minister, Sergey Ryabkov, shot back that the delivery of the missiles would be a stabilising factor that could dissuade “some hotheads” from entering the conflict.

The danger for Israel here is it could easily fall into the “flak trap”. In fact, it was the huge number of sorties conducted to suppress SAM systems that led to the high attrition rate of American and Israeli aircraft four decades ago.

The Syrian military is not in the same league as the highly trained, motivated and brilliant Vietnamese. Syria’s anti-aircraft defences seem unable to stop the Israeli raids, and there is no guarantee they will use the S-300 effectively. There have been four strikes on Syrian military sites this year, and on each occasion the Israelis targeted weapons it feared were on their way to the Hezbollah.

Russia, therefore, has reason to be wary. If the Israelis take out the S-300 batteries, it would leave one of the world’s most feared weapons a little less feared. “The delay is all about the Russians understanding the Israeli situation and not wanting to trigger a response that would hurt Russia,” says Strategy Page.

Right now there are two options on the table. One, Russia can step up the training of Syrian missile crews before dispatching the latest – not stripped down export – versions of the missiles.

Another option is to supply the S-300 on the condition they will be operated by Russians, who would not only perform better in a conflict, but by their very presence deter an Israeli raid. A foolhardy Israeli attack on Russian-manned batteries will invite a massive backlash from Moscow, including increased support to the Iran-Syria-Hezbollah alliance. The trickle of Russian weapons will in all likelihood turn into a torrent.

You can almost hear Assad tell the Israelis: “Go ahead, make my day.”