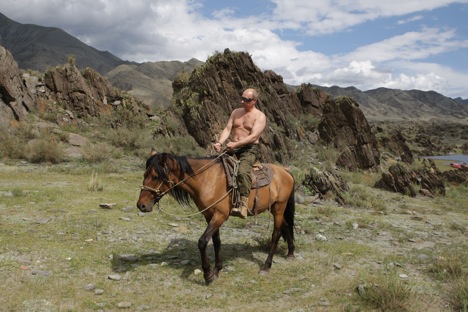 The Indian youth are easily impressed with images like this one of a shirtless Putin on horseback. Source: AP

Vladimir Putin’s shirtless horseback-riding, tranquilizing of an Ussuriski tiger to save a television crew and flying with endangered Siberian cranes have added to his popularity in India.

When Goa-based Polina Belova heard about Russian opposition activist Alexey Navalny getting sentenced to 5 years of imprisonment for masterminding a property embezzlement scheme, the 31-year old native of Rostov went into a fit of rage. She immediately tried to mobilise Russians and Indians in and around Airambol for a protest against Russian President Vladimir Putin. “The Russians on holiday made some excuse or the other to not help me, and younger Indians called me crazy,” she said. Belova calmed down when Navalny got bail the next day, but cannot get over the “crazy” remark.

She was called “crazy,” because a large number of young Indians seem to have nothing but the greatest admiration for the Russian president. It’s too bad for Putin that health restrictions forced him to have a very short visit to India last year for the annual summit between the countries. Putting aside the mass protests over a gang rape in Delhi last year, if the Russian president actually went to address students in a university or at any forum where he could have interacted with the youth, he would have left India with a big smile on his face.

It doesn’t hurt the Russian president’s popularity in India one bit when he showers the country with lavish praise during bilateral summits or his meetings with Manmohan Singh on the sidelines of multilateral events. Russian official statements right from the Kremlin to the smaller ministries never spare to use the word “friend” when mentioning India. Of the course, the sincerity of the Russian elite should not be doubted, but it sure helps for them to understand how much India values words and even symbolism.

Call them PR stunts if you like, but Putin’s shirtless horseback-riding, tranquilizing of an Ussuriski tiger to save a television crew, flying with endangered Siberian cranes and even his judo videos have made him incredibly popular in India. Young India is frustrated with what it sees as a weak prime minister. Manmohan Singh’s image doesn’t get a boost when the media constantly portrays him as powerless and subservient to Sonia Gandhi. India is still highly patriarchal and young male egos get pounded when they see how the head of the government “takes orders” from a woman who seems to have all the power without the tiniest bit of responsibility.

Unlike Manmohan Singh, Putin seems to be a man with power and who is always in control. Belova, the Goa Russian who tried to organize support for Navalny, tried in vain to convince younger Goans that Indian style democracy is the least of all evils when it comes to governance. “They insisted that large countries like India and Russia needed a strong leader to progress,” Belova said. It’s a popular and widely-accepted belief among young, urban India that a benevolent autocrat may be the best thing that could happen to the country. Some youth are even convinced that the country should be handed over to the army. They argue that army cantonments in India are clean and well-maintained and that the armed forces would bring such discipline across the country, if they held the reins of power.

If there had to be a compromise between those who want democracy and those think army rule is a better option, then a powerful leader like Putin who “gets things done” fits the bill for Indian youth.

There’s an increasing line of thought in the country that Narendra Modi might be India’s own version of Vladimir Putin, albeit minus the bravado of tranquilising tigers. It’s tough to argue against those in India who claim that the country has been completely mismanaged in the last 9 years. From being considered a challenger to China in 2004, India is now being frowned upon by international investors. Would a Putin-like strong man be the answer to the country’s woes? We will only know the answer to this question if there is a change in government after the 2014 elections. Not even the best of India’s astrologers would be able to accurately predict what’s going to happen when the country votes next year.

Having lived in both Russia and India over extended periods of time, it’s easier for me to understand that there is no such thing as a “one size fits all” system of governance. Those in the West who praise India for its democracy and criticise Putin’s Russia for its alleged autocratic ways are not in touch with the contemporary realities of both countries.  While I may not entirely agree with the way either country is run, I think it’s essentially up to the Russians and Indians to experiment with different systems and see what works out well for the long-term interests of their countries.

A Western style democratic experiment led to nothing but complete chaos in Russia in the 1990s. If the founders of India’s own Western style democracy were alive today, they might not exactly be thrilled with how the country has turned out six and a half decades later.