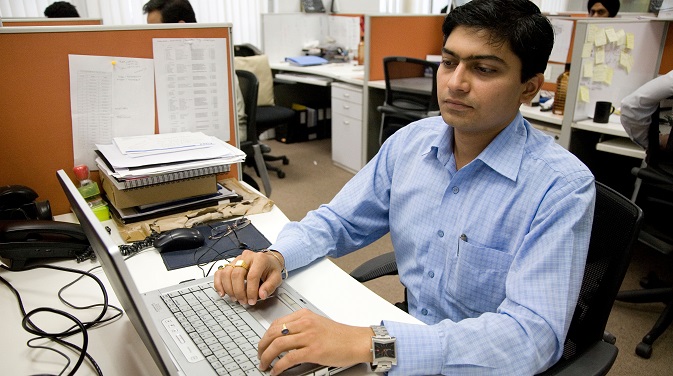 The demand for Indian professional is increasing and India exports 4 percent of its total generated skilled talent. Source: Alamy/Legion Media

Indians play a key role in keeping the United States at the forefront of the technological race. There’s no reason why Russia shouldn’t attract skilled workers from its only stable strategic partner.

As the developers of Google, Moscow-born Sergei Brin and American Larry Page are unimaginably influential, wealthy and famous. But there is another man, who preferred to stay in the shadows. Rajiv Motwani was the Stanford professor who mentored Brin and Page in their work on search engine technology. In fact, the Indian was the glue that bonded the Google team.

In a paper called “What Can You Do With A Web In Your Pocket” Brin, Page and Motwani wrote: “We have developed a global ranking of web pages called Page Rank based on the link structure of the web that has properties useful for search and navigation. We have used Page Rank to develop a novel search engine called Google.”

In 2009 when Motwani, 47, died in a drowning accident, Brin wrote: “When Larry and I began to work together on the research that would lead to Google, Rajeev was there to support us and guide us through challenges, both technical and organizational.”

What are the chances a similar partnership could happen in Skolkovo – Russia’s Silicon Valley? The answer is easy – smaller than small. That’s because there just aren’t enough foreign born professionals in Russia firing up the innovation factory that would result in a large number of start-ups.

Motwani belongs in a lengthy list of Indians who have contributed – often spectacularly – to keep the United States at the forefront of technological progress. There’s Sabeer Bhatia, the founder of Hotmail, Vinod Khosla, the man behind Sun Microsystems and Java, Vinod Dham who created the Pentium chip, Mani Bhaumick, the man behind Lasik, Amar Bose of Bose speakers, and Kanwal Rekhi, whose Ethernet networking technology enabled the growth of the internet. It is incredible that Indians who form less than 1 per cent of the American population establish 8 percent of all technology and engineering startups in the country.

Read about career opportunities in Russia

In 2012 Kauffman Foundation published a survey which confirmed Indians were the most numerous of the immigrant tech-company founders. They founded more startups than the next seven immigrant groups (including China, Taiwan, Britain and Japan) combined and started 33.2 per cent of all immigrant-founded startups in the United States.

Why not in Russia

On the face of it, Russia’s IT sector is humming along just fine, with Kaspersky and Co being world beaters. But compared to the galaxy of start-ups spinning out of Silicon Valley, the Russian output is minuscule. Also, with Russia’s population growth nothing to write home about, it begs the question: are there enough numbers of young Russians to sustain even the current progress?

The short answer is no.

Russia needs a huge inflow of migrant workers to meet the country’s demands for economic development. “If we look closely at the situation and at issues concerning demographics, as well as economic issues, every year we need over 300,000 migrants to come get naturalised and permanently live in Russia,” Konstantin Romodanovsky, the head of the Russian Federal Migration Service, told Ria Novosti in March.

India accounts for the largest number of foreign students (nearly 26 percent) in science and engineering in the United States. Similarly, the UK, Australia, Canada and other developed economies are receiving significant number of students for higher and technical education from India.

The demand for Indian professional is increasing and India exports 4 percent of its total generated skilled talent, concludes a 2012 paper titled Mobility of Highly Skilled Workers and Academic Collaboration in India and Russia.

‘Moscow is a city of possibility’

The paper was prepared in the framework of the project between the National Institute of Science Technology and Development Studies (NISTADS), Delhi and the St Petersburg Branch of the Institute for the History of Science and Technology, Russian Academy of Sciences. The study was supported by the Integrated Long Term Programme (ILTP) of Cooperation in Science & Technology between Russia and India.

While India and Russia have had close political and academic ties since India’s independence, they have been entirely at the official level. When the Soviet Union fell, so did much of that edifice.

Development of the Saras light aircraft, semiconductor products, super computers, poly-vaccines, lasers, seismology, high-purity materials, software and IT and Ayurveda are some of the priority areas of co-operation under ILTP.

Well and good. But all this is dependent on fickle international relationships. Official relationships are never set in stone and there’s no guarantee ILTP will sail smoothly forever. For Russia to benefit from Indian professionals there has to be a focussed drive to attract them.

India has the numbers to feed Russia’s high tech sector, and Russia clearly needs professionals in ample numbers. The frequency with which Russian rockets are attaining parabolic trajectory hints at the talent crunch at the most Russian of Russian industries – space.

The success of the American Green Card has led to other countries, including Germany and South Korea, launching similar programmes to attract skilled labour. Germany’s programme has drawn large numbers of Russians and immigrants from the CIS.

However, Russia must avoid the mistakes of Germany, which was totally unprepared for Indian immigrants. One IT whiz regretted his decision to reject offers from Silicon Valley and come to Germany. For starters, he was lost amidst the mountains of German language forms he had to fill before he was even assigned his responsibilities; the guy was snubbed by women on the streets who would refuse to give him directions; getting his children admitted into the right grade proved to be a nightmare.

To be sure, the first generation of Indians in California also faced difficulties – such as not being allowed to rent homes – so Germans weren’t unique in their xenophobia. At any rate, Europe is a generation behind the United States in multiculturalism.

Russia being the largest country on the planet – with barely 140 million people – is understandably jittery about immigrants staking out territories for future claims. Indians will never do that sort of thing. Indians never create ghettos and do not ask for sovereign rights if they become a majority. In fact, Indians can provide the critical mass required to counter unwanted elements in the Russian Far East or south.

Indians are model immigrants with the most stable marriages and high levels of home ownerships. Even Indian youth are focused; when was the last time you read about Indian teens trashing a home after a night of partying? Probably never. Russians can only benefit from such neighbours.

It’s a question of supply side economics. Indians are incurable travellers and if Russia decides to accept immigrants, highly skilled engineers and scientists from India will come. This will also benefit the second rung of Indian skilled workers, who currently migrate to the UK, Canada or Australia and end up working as grocery managers.