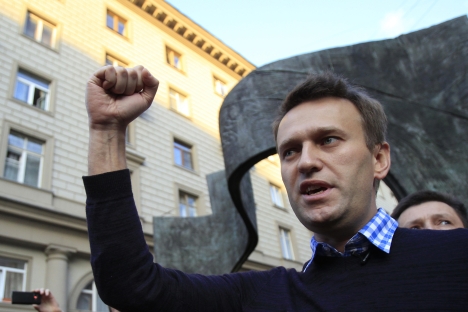 The real idea behind building up the Navalnys is to get under the skin of the Russian political establishment. Source: Reuters

American commentators apply an entirely different yardstick to Navalny, while their peer group back home casts Anthony Weiner as the original sinner.

Both mayoral races have become exciting due to the presence of two colourful candidates. The candidacy of blogger-agitator Alexei Navalny, who has been convicted for illegal timber trafficking from state forests worth half a million dollars, livens up the Moscow race.

The indiscretion of Anthony Weiner, former US Congressman, on the other hand, stemmed from a compulsive weakness for what Americans call “Online sex” – sending lewd selfies (pictures of oneself) to women he got acquainted with on the Internet.

Unlike Navalny’s theft of state property, Weiner’s act was a private affair. Yet, there has been an avalanche of criticism about Weiner and editorials and national leaders in the US have urged him to drop out of the mayoral race following the tawdry revelations about his escapades last week.

Weiner didn’t steal a single dime, but he was forced to resign his position as lawmaker in Washington and, as Christian Science Monitor reported, “He’s dogged by hacklers on the campaign trail, as well as late-night comedians giddy with jokes about Carlos Danger “selfies” and ex-chat paramour Sydney Leathers.”

In comparison, all the animated discussions in Russia about Navalny bypass the core issue, namely, he has a record of embezzlement of public property and, therefore, ineligible to hold office. Ironically, it is on the issue of corruption that Navalny built up his strange career in the blogosphere from where he tiptoed into politics with magical ease.

It is even bigger hypocrisy that the American commentators apply to him an entirely different yardstick when their peer group back home would cast Weiner as the original sinner. To be sure, the strange case of Navalny raises some big issues.

He went to Yale under an American scholarship and returned to Russia as a freshly-minted public crusader – telegenic, English-speaking and audacious. But does that absolve him of a criminal past? This is one thing.

The independent pollsters put Navalny’s rating as somewhere around 15 percent, which won’t stop incumbent mayor Sergei Sobyanin from winning outright in the first round. The polls show that the people’s distrust about Navalny is only growing and they feel troubled not only by his shady past but also by his brand of Russian nationalism that pits Russia against Muslim Central Asia.

Despite the West lionizing him, Navalny looks less and less convincing as a leader of a coherent opposition. And it raises a question: Is Navalny an individual or is he a project? There is something sinister going on.

Why else should the National Endowment for Democracy [NED] sponsor a 22-year old Russian young thing, Vera Kichanova, to visit the White House in Washington last week as “one of the faces of the new generation of political opposition in Russia.” Ever heard of Vera?

The NED, which specializes in staging ‘colour revolutions’ in the former Soviet republics, acted as recruiting agency, while Vera’s appointments in Washington, DC, included Susan Rice, US national security advisor, Samantha Power, US ambassador to the United Nations, et al and the high officials at the White House and the State Department were eager to pick Vera’s mind about “what the US can do to help promote reform in Russia.”

The spirited Vera promptly suggested to the Obama administration to expand the Magnitsky List “to include others, like the people responsible for the arrests of protestors on Bolotnaya Square [in Moscow in May 2012].”

The real reason behind such manifestly anti-Putin frenzy in the US needs to be understood. Gangster capitalism began in Boris Yeltsin’s time. It was Yeltsin who destroyed in 1993 the nearest thing Russia ever got as a parliament by ordering tanks to fire shells on its White House home. Yeltsin nonetheless enjoyed a good press in the West. There were no Veras hanging around Bill Clinton’s White House. Why so?

There were two reasons. One, the only alternative to Yeltsin was the Russian communist party, whose return to power was unthinkable for Washington, which, therefore, duly ensured Yeltsin won the 1996 election. The second reason was that a huge transfer of wealth was taking place from Russia, thanks to the bizarre situation in Russia.

On the other hand, the post-Yeltsin Russian political system proved “non-cooperative”. Vladimir Putin is an immensely popular national leader and doesn’t need the US’ support for political survival, thanks to his assertive international stance and his relatively successful economic policy, which saw a higher trajectory of growth, drop in unemployment and rise in real wages.

Obviously, it meant that the sort of dizzying levels of influence that Washington held over Yeltsin’s Russia has become a thing of the past. And, the sort of “business opportunity” to fish prize specimens from the muddy pool of Russian economy no longer exists as in those halcyon days of the nineties.

The real idea behind building up the Navalnys and Veras is to get under the skin of the Russian political establishment.

The Russian opposition movement has lost its fizz although certain other factors come into play here. The first is of course the nature of the Russian intelligentsia, which is unique insofar as it has been in conflict with the authorities for 200 years.

Secondly, a process of social stratification has been steadily going on in Russia but it is too early to speak of a “middle class” protest. In the ideological vacuum that followed the collapse of the Soviet Union, the western liberal theory has been blindly imported, which needed to be adapted to the Russian reality. Put differently, although the Russian middle class is becoming a part of the global middle class and consumerism is taking hold in a big way and it is becoming important for a Russian to earn money to buy and travel – despite all this, a middle class that has been used to “average prosperity” is today dreaming of earning money as in the western capitalist system.

Those who have been successful are keen to preserve their privileged position by possessing power or by virtue of proximity to power. In sum, the society is coping with the power of money, adapting to the new reality that even if money isn’t everything, it is “almost everything.”

This process of adaptation will take time and it is directly related to building a market society that makes people aware of their interests and rights. Therefore, the danger of carrying the over-centralizing process of the past decade or so – stemming from the compulsion to construct a viable state out of the Soviet rubble and to stem the meltdown of state structures and the economy under Yeltsin – exists, but to an outside observer, Putin’s intention seems to be not to allow that danger to happen.

This is where a fair and chaotically free election to the Moscow Mayor’s post in early September will help to ease the current tension. But the complexity of the situation Putin is dealing with as such will not dissipate, because it also involves the adaptation of the Russian society – tearing itself away from its usual environment and changing the outlook to the global parameters, which also means understanding itself better.

Democratization, given Russia’s history, is accompanied by “destabilization,” leading to numerous conflicts in the country and the lack of “control.” Of course, destabilization will be destructive for any country and the authorities need to bring back the stability in society and put the government back in order.

All in all, therefore, Russia is passing through a historic cycle and the rites of passage cannot be determined by anyone other than the Russian people. Putin sees that this cycle remains incomplete without constructing its vital underpinning – a genuine rule of law. This is where the absolute freedom granted to Navalny to garner his optimal strength in a free election – and to lose conclusively – becomes at once interesting and extremely important. Weiner will be lucky to get that far.