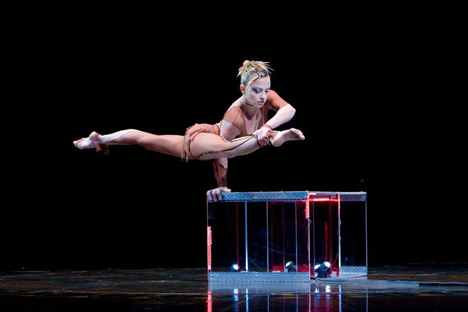 In the world of circus these days, it’s all about Facebook. And why not? In a profession that is based on travel, on lives built in different countries, like classmates from grade school, performers and circus professionals keep in touch through modern technology, rather than through the grapevine, as previously done.

They are in Vegas, Berlin, traveling with the Big Apple Circus and many others, chatting and emailing, Skyping and friending, through massive amounts of photos they keep in touch, comment and show off everything from their costumes to their children, posting videos of their acts and gossip about their lives.

Many I’ve met myself, once upon a time, somewhere, somehow, like Malvina Abakarova who I met in 1990, while she was traveling through my hometown of Reno, NV. Some 23 years later I came across her page on the web.

She’s into Skype, she told me, when I saw her in New York City on the road with her husband and daughter, performing a new strap act. She used to be a highwire walker.

Anatoli Miagkostoupovbased in Vegas, a former master juggler, now runs a company of his own, “Aces of Acts,” selling circus acts.

Check him out on Facebook too.  And don’t forget his son, Vladik Miagkostoupov – superstar of Cirque du Soleil with his own juggling act, continuing the tradition of throwing balls in the air.

Then there’s the famed Pavel Brun, the former longtime artistic director of Cirque du Soleil and Celine Dion, is now as famous online as he was in person. In the past, circus performers on the road kept up with each other through gossip, through long conversations with their colleagues about was working where, who had married who.

Tragedies and traumas, all were talked about for hours on end. Now all it takes is a click of a mouse.

circus us russians abroad Blogs Clowns in the Desert