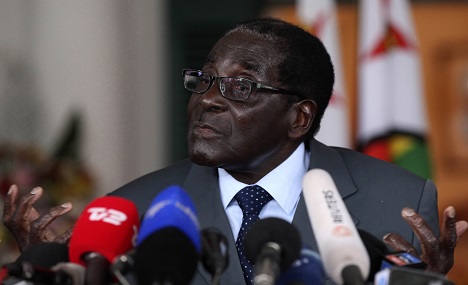 Mugabe is an old fox and knows which way the world’s axis is shifting. Source: Reuters

It is ironic that the West, having supported the most brutal dictators, is going after President Robert Mugabe like a lynch mob. On the other hand, Russia, which supported Zimbabwe’s freedom struggle, is once again coming to its aid to prevent the country’s further humiliation.

Before it became independent, Zimbabwe was named Rhodesia, after Cecil John Rhodes, British colonial financier, diamond miner and politician. But in the West they rarely invoke Rhodes, which is strange because his name is associated with the Oxford scholarships. The West doesn’t want to be reminded that some of its great institutions were built by Rhodes, a murderer of countless Africans. To be sure, murder was the least of his crimes; Rhodes was also the architect of apartheid. He once famously declared: “I prefer land to n*****s.”

More than a century after his death, Rhodes is arguably the most hated man in Africa. For, it was his racist land grab that is responsible for the deep-rooted poverty and other enduring problems in places such as eastern Africa, South Africa, Zambia and most notably, Zimbabwe. At the January 2002 Pan Africanist Congress, the delegates said that “the problems which were being blamed on President Robert Mugabe were created by British colonialism, whose agent Cecil Rhodes used armed force to acquire land for settlers”.

Zimbabwe’s troubles with the West started in 2000 when President Mugabe decided to take back land from the white settlers and redistribute it among black Africans. Race, believe it or not, had nothing to do with it.

If Mugabe had wanted to kick the whites out he could have done it at the most opportune time – in April 1980 when the country got freedom from British-backed rule. He had won the gruelling Rhodesian Bush War in which the white rule of Ian Smith had killed and jailed thousands of Africans.

Mugabe was in fact tolerant to a fault. For 20 years, he allowed the whites to continue farming formerly black-owned land, while his own people wallowed in poverty. It was pressure from the thousands of freedom fighters that led to the land reclaim.

The former guerrillas had waited two full decades without any tangible benefits from the end of colonial rule. It was a futile wait. For, how could their lot possibly improve? Zimbabwe was a nearly 100 percent farm-based economy and the best lands were owned by the whites – the detritus of British colonialism.

But Mugabe still did nothing. He was the Nelson Mandela of Zimbabwe before Mandela was a household name even in South Africa. His restraint in the face of white prosperity and black starvation has rarely, if ever, been mentioned in the Anglosphere.

As pressure mounted on Mugabe to redistribute land, it was a CNN news clip that finally forced the Zimbabwean patriarch’s hand. Broadcast in the run-up to a parliamentary election, the report showed “rotund white settlers” lining up to donate cash to his opponent Morgan Tsvangirai.

Zimbabwe is a touchy subject for the West because what Zimbabwe is doing today could be a precedent for South Africa tomorrow and in the West the day after. There’s nothing that repudiates colonialism more than the act of reclaiming African land from the white settlers.

According to Caribbean writer Ras Tyehimba, the land situation in Zimbabwe is crucial to understanding the motives and interests that underlie the Zimbabwe situation. “From the colonial period to now, Britain has been intent on maintaining illegitimate white control of the land, which belongs to black Zimbabweans,” he says.

“What is happening now has implications for countries across the African continent, where, after political independence, white settler families have maintained control of ill-gotten land, thus perpetuating the dispossession of many indigenous blacks who had their land stolen during the European scramble for Africa. Zimbabwe, under President Mugabe, has made the most progressive moves on the whole of the African continent in addressing the vexing land issue.”

Not quite everywhere. Russia is a white country too. Why doesn’t it feel outraged that a black country is kicking around white people?

Russia’s approach towards Zimbabwe can be summed up in the words of academic Dmitry Mikheyev, former Senior Fellow at the Hudson Institute. “Russia has never claimed racial or religious exclusivity,” he says.

In 2008 after Russia vetoed a UN resolution against Zimbabwe, then President Dmitry Medvedev said Moscow would work with the international community to help stabilise the situation in Zimbabwe. Russia had no plan to give the UN, and by extension the West, a blank cheque to humiliate Zimbabwe.

Winners and whiners in the scramble for Africa

On the other hand, the West continues to view Mugabe through colonial lenses. The British – and the rest of the Anglosphere – hate his guts because he defeated them in a fair fight. Unlike in, say, India where Gandhi’s peaceniks allowed the British to make a face-saving retreat, Mugabe’s black fighters forced the whites to the negotiating table at the point of the gun. These guns were supplied by China and Russia, both of which played a key role in Zimbabwe’s path to freedom.

Neither country is planning to let down their Cold War ally; in fact both are investing in the country.

The Russian push into Zimbabwe is being facilitated due to the pioneering work of Soviet-era geologists who discovered that the country was sitting on a massive pile of diamonds, uranium, platinum, gold, nickel and copper.

One of the many adventure capitalists drawn to the country’s wealth is Alexander Chepik, the head of Ruschrome. “The whole of Mendeleyev’s table is there,” he told Moscow News, referring to the periodic table of elements invented by the Russian scientist Dmitry Mendeleyev.

In October 2012, Zimbabwe concluded a trade deal with Russia to generate foreign direct investment. In May 2013 defence officials and military experts from Zimbabwe attended an international conference on European security, in Moscow. As well as making deals, they sought help in the area of military intelligence.

To be sure, doing business in Zimbabwe is not for the faint hearted. The country is split between rival factions and corruption rears its ugly head from time to time. Siphoning of diamonds by the political elites is rampant.

One of the little known facts about the country’s freedom struggle is that Mugabe did not receive any support from Moscow, as the Soviets supported his rival Joshua Nkomo, forcing Mugabe to enter into relations with Beijing. So when Mugabe became the President the Chinese became top dogs in Harare, with the Russians playing catch-up.

However, Russia hasn’t let Mugabe’s closeness with the Chinese impact its relationship with Zimbabwe. Besides, Russia is keen to demonstrate its commitment to developing Zimbabwe, unlike the West which seems to have a sense of entitlement when it comes to Africa’s resources. For instance, Ruschrome was able to obtain a licence to develop the Darwendale platinum field in 2006 after working for 10 years in the country on various other projects.

Mugabe is an old fox and knows which way the world’s axis is shifting. In June 2010 he told his people: “Zimbabwe is very much looking East and there is no turning back.”