Nostalgia for a common Russian home 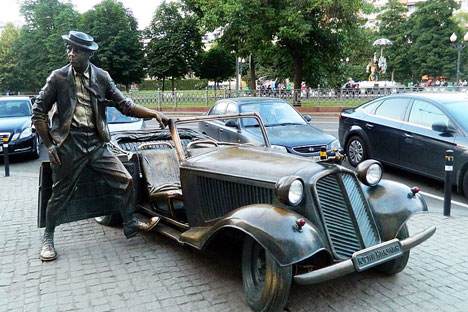 The monument to Yury Nikulin, the founder of the Nikulin Circus on Svetnoi Boulevard. Source: wikipedia

The word nostalgia in the Russian culture plays a big role. In the ten years that I lived in Moscow, it seemed like everyone was always nostalgic for something - their student years, their childhood apartment, summer camps, sports training if they were athletes.

Russians, I came to the conclusion, love to talk about the past. Repeatedly. There's not too much room for nostalgia in the U.S. We are a country focused on the future. It seems that history to Americans, is what happened yesterday.

Honestly, I can relate to the Russian philosophy of the importance of days gone by. It's been more than 20 years since I first stepped foot in what was then called The Old Circus, located on Svetnoi Boulevard.

And I miss it terribly.

I remember the first time I showed up, in search of a highwire walker who I'd met on tour in my home state of Nevada. She told me then, that if I ever made it to Moscow, I should look her up.

So I did. I was young back then, didn't care much about anything. I found myself in Moscow (long story) and one day I decided that she might be at the Old Circus. I showed up at the employee entrance, and asked the guards if she was there.

Surprisingly, they said no. She had already come and gone. But her sister Fatrima was there, and they simply told me what dressing room she was in.

Nowdays, that would never happen. Strangers can't just wander in, like most professional circuses.

For the next ten years, the Old Circus became my home away from home. The guards knew me; they  just let me in every night to hang out backstage with the performers.

Backstage in the gigantic building was a whole world in and of itself. After a few months, the performers all knew me. I'd wander from dressing room, to dressing room, sitting with them as they put on their make up, walked around in costumes. I often sat in the cafeteria where performers could hang out while waiting for their act to appear.

I worked nearby, and every night after work, I'd go straight to the circus.  I often watched the trapeze flyers practice after the show was over. They were magnificent.

They also let me try swinging through the air over the net, something that these days, would never happen. Strangers can't just learn to fly, whether or not they have experience. But back then, nobody cared about who was up top, on the pedestal, making a fool out of themselves just because/

Life was fun back then. My friends all came from the circus, including Alla, the woman I tried to find that day. I spent my years in Moscow immersed in the world of circus.

Nothing in Moscow is the same anymore, especially at the most famous red ring in downtown Moscow.  Strangers can't just wander in and make their way to the dressing rooms, like I used to do every night. Now everything is under strict control.

And even the name of the Old Circus has changed.. These days it's called The Nikulin Circus on Svetnoi Boulevard - a new name for a new era.

If you want to get a ticket, take your credit card. The seats are no longer cheap.

How I miss the old days.

circus perfomance us Blogs Clowns in the Desert