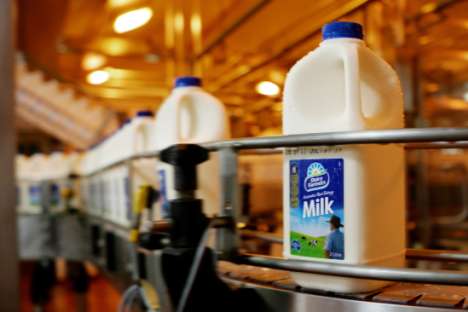 Fonterra’s CEO has apologised to the New Zealand public. Considering the company earns most of its profits overseas, an apology to buyers in China, Russia, Malaysia, Vietnam, Saudi Arabia and Australia would be in order. Source: Reuters

Russia’s blanket ban on all milk products from Fonterra is a fitting response to the New Zealand diary giant’s contaminated milk products and the company’s silence on matters of life and death, especially of children.

‘‘Important Warning: New Zealand Milk Kills Children.’’ That alert issued by Saudi Arabia is typical of the worldwide scare after it was confirmed New Zealand dairy giant Fonterra had exported whey protein products contaminated with killer bacteria. The whey was produced in May 2012 at a single New Zealand plant.

However, it is Russia which has led the global backlash, banning all Fonterra products. Russian news agency RIA Novosti reported the country’s consumer protection watchdog, Rospotrebnadzor, was recalling the company’s inventory and advising consumers not to buy its products.

Extreme reaction? Not quite

*Russia has banned all dairy products from New Zealand’s Fonterra, and Vietnam and Malaysia are looking at bans as well.

*New Zealand is a country of just 4.4 million people, yet is No.7 in milk production; India is No.1.

According to the New Zealand media, Russia’s action is extreme. For, even China, which awards the death penalty for food poisoning crimes, has stopped short of a blanket ban on New Zealand dairy products.

New Zealand Trade Minister Tim Groser said he would work with Russia over the ban. “Ninety million dollars of this is butter and spreads and $2 million is milk powder,” he said. “I have never heard anyone suggest for one nanosecond that butter could be possibly implicated in this.”

But although Russia hasn’t executed anyone in the last 22 years, its food laws are more stringent than China’s. According to a statement issued by Rospotrebnadzor, the watchdog will “continue to follow” the development of the recall “to prevent diversion to the Russian consumers of dangerous products.”

Indeed, Russian agencies are quick to implement import bans linked to food safety issues. For instance, last month Russia banned imports from Ukrainian candy maker Roshen after a cancer causing chemical was said to have been found in a product sample. Before that Russia banned the import of fruit and vegetables from the European Union and meat and poultry from the United States over quality concerns.

As New Zealand’s cash – some say holy – cow and the country’s No.1 exporter earner, Fonterra lives a charmed life. The company is not only a monopoly by legislation, controlling 90 percent of the country’s dairy industry, its farmer stakeholders are a class apart, treated like royalty and bestowed all sorts of subsidies. A measure of its dominance is that Fonterra’s export earnings contribute $20 billion to the $150 billion New Zealand economy.

The botulism poisoning is not the first time Fonterra has been involved in a scandal. In January 2013 DCD nitrate inhibitor residues were discovered in its products.

In 2008 there was the Sanlu milk scandal in which dangerously high levels of the industrial chemical melamine was found in powdered baby milk and other dairy products in China. More than 296,000 Chinese babies fell ill, 6000 of them seriously; six tragically died.

As a 43 percent stakeholder in Sanlu, Fonterra should have received some punishment. Yet, its chief executive pulled off a remarkable Houdini act, and got away without so much as a warning. Because only Chinese babies died the New Zealand government did nothing.

Russia and U.S. to negotiate resuming import of American meat

Silence of the holy cows

This time, however, the proverbial has hit the ceiling – especially at home. Thousands of New Zealand children may have been fed formula manufactured with the tainted whey, although there have been no reports of illnesses as yet.

“Our patience with Fonterra is running out,” writes Andrea Fox, specialist farming writer at Fairfax NZ. “The botulism scare is one too many, but being kept in the dark too long for a third time on a food safety issue is simply not good enough. Nor is it acceptable to refuse to answer – or to take days to respond to – basic questions, answers to which could have saved many a parent a sleepless night worried whether the next can of infant formula they buy could be toxic.”

Other countries are taking Russia’s lead in banning Fonterra products. Saudi Arabia, Vietnam and Malaysia are looking at similar bans. Moreover, as New Zealand’s top buyer, China is questioning the country’s claim to be an organic foods paradise.

“For a long time, New Zealand has marketed its products overseas as being ‘100 percent pure’, and this has been especially true of its dairy products,” China's state-owned news agency, Xinhua said. “However, Fonterra has had a series of problems and this is beginning to shake the confidence of some Chinese consumers in its ‘100 per cent pure’ milk powder.”

And in another huge embarrassment for New Zealand, China announced on August 7 that it had fined six milk suppliers, including Fonterra, a total of $108 million for price-fixing. The companies admitted they violated the anti-monopoly law by setting minimum prices distributors were required to charge, which raised costs for consumers.

Meanwhile, Fonterra’s CEO has apologised to the New Zealand public – for the second time this week. Considering the company earns most of its profits overseas, an apology to buyers in China, Russia, Malaysia, Vietnam, Saudi Arabia and Australia would be in order.

Or does Fonterra believe the lives of foreign children are cheap?