US: India’s Afghan presence not above suspicion 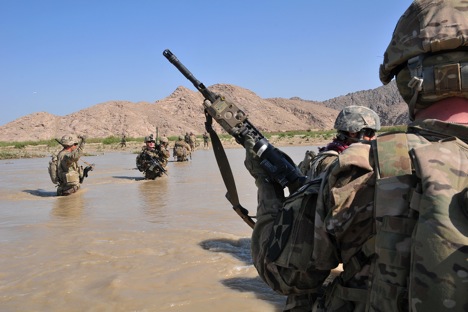 Washington has gingerly sidestepped India’s security cooperation with the Afghan government. Even more circumspect have been the American remarks about India’s security presence in Afghanistan.

The United States has been extremely cagey about the Indian presence in Afghanistan. The stated position by Washington is that India has an important role to play in Afghanistan’s development. A senior state department official, Assistant Secretary Robert Blake even once called India a “lynchpin” in the Afghan reconstruction.

While saying this, Washington has gingerly sidestepped India’s security cooperation with the Afghan government. Even more circumspect have been the American remarks about India’s security presence in Afghanistan.

Therefore, eyebrows will be raised in Delhi that the US special representative for AfPak James Dobbins has broken the taboo. In an interview with the BBC, Dobbins has been quoted as saying that Pakistan’s concerns over the Indian presence in Afghanistan are exaggerated but “not groundless.”

This must be the first time ever that an American official has said such a thing openly. Dobbins’ exact statement runs like this: “The dominant infiltration of militants is from Pakistan into Afghanistan, but we recognise that there is some infiltration of hostile militants from the other direction as well. So Pakistan's concerns aren't groundless… They are simply, in our judgment, somewhat exaggerated.”

He also took note that Islamabad is concerned about the issue of “cross-border militancy.” Dobbins added that the issue had been discussed at great length with Pakistan. “We believe that Pakistan, Afghanistan and the US need to collaborate much more closely to deal with this threat of cross-border infiltration.”

However, Dobbins played down the Indian presence in Afghan cities as a whole and said it is miniscule and “perfectly reasonable”, considering the Afghan-Indian economic and cultural ties.

Significantly, Dobbins made the remarks soon after the abortive attack last Saturday by a suicide bomber on the Indian consulate in Jalalabad close to the Pakistani border, which killed at least nine civilians.

According to reports, in the Indian and Afghan assessment, the attack was carried out by trained militants from Pakistan. The reports also indicated that Delhi had advance intelligence regarding such a probable attack.

The Jalalabad incident puts Washington in a quandary, since it comes at a time when the US is in desperate need of Pakistan’s cooperation in bringing the Taliban to the negotiating table and Dobbins has taken pains to claim that there has been a “genuine shift” in Pakistan’s policies toward Afghanistan in the direction of amity and cooperation.

In a statement on Monday, the United Nations Security Council strongly condemned the attack on the Indian consulate. However, on Tuesday Dobbins made the curious attempt at tight-rope walking, implying in the BBC interview that India’s Afghan role isn’t entirely without blemish, either.