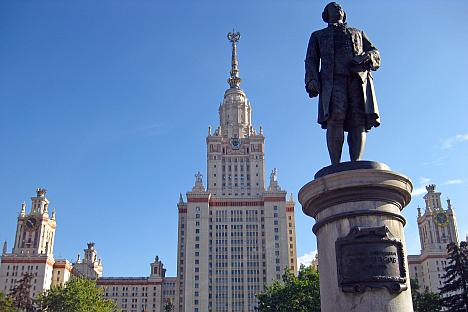 In a few weeks, a new batch of students will leave the comfort and familiarity of India for a beautiful yet challenging environment in Russia. Assimilation into Russian society is the key to happiness in the country.

Quite often, worried students and parents ask me about college life in Russia. Although I have never been a full time student in the country, I have met a large number of Indians who have studied in places such as Moscow, Smolensk, St Petersburg and Volgograd. Most of these young people claim that their time in the country was absolutely golden and full of good experiences. The odd student here and there talked about getting involved with the wrong crowd and also having to deal with certain uncomfortable situations.

It’s easy to get swayed by all sorts of negative information on the internet, but keep in mind the old saying- “misery demands company.” It’s essential to maintain a positive attitude and focus on the good things about student life in the country.

Many Russian students come to big universities from smaller towns, where they haven’t seen too many foreigners. This invokes a great degree of curiosity and openness to get to know someone from another culture. In many cases, these are young people who want to improve their English language skills. Of course, for an Indian student this is also a great opportunity to not only practice Russian with a native speaker but get to know about the country’s culture and psyche.

Indian students often fall into the trap of befriending their countrymen and sticking together in groups with other Indians. Not only does this rob you of a chance to make friends with Russian students, it also stops you from seeing the kind of places that few foreigners see while in Russia. I am not even hinting that one should avoid other Indian students, but no matter how long student life is in Russia, it’s still temporary and international friendships made in the student years are the ones that usually last a lifetime.

Even if the medium of instruction in the university is English, it is absolutely essential to learn Russian.  Few things open more doors and opportunities in the country than speaking the Russian language. Russian society is absolutely open and welcoming of foreigners who make an attempt to speak the language. The better your Russian becomes, the easier it is to become a part of the mainstream in the country. Don’t pay too much attention to reports of xenophobia against former Soviet citizens, since this is more a class problem than anything else. Unless your intention is to illegally work in an outdoor market, you’re not going to face the nastiness of the insecure sections of society.

Another good way to get to meet interesting locals is to volunteer at cultural centres and museums. Many of them are on the lookout for native speakers of English to help proofread catalogues and documents.  Some of the larger universities in the country have Indology (Indian studies) departments and many researchers who are experts on India are curious to know more about the contemporary realities of the country.  Such people often belong to the most intellectual class of society and spending time with them can be a mutually rewarding experience.

Russian cities are much safer than they were in the wild days of the 1990s, but it’s still a good idea to be aware of your surroundings and avoid bad neighbourhoods in your city. It would be absolutely foolhardy to go out alone at 2 am in any Russian city.

Ten-fold rise in demand in India for Russian universities- report

You would have to be extremely unlucky to get robbed or attacked in broad daylight but then if you look like you are going to get mugged, you probably will.  Be on guard and don’t walk around like a scared puppy and you should be fine.  Russia may not be as safe as Switzerland, but it’s definitely not like a Latin American country.

The Russian authorities have taken a hard line against skinhead activities and the danger of getting attacked by a xenophobic gang is less likely than it was in the early 2000s. That doesn’t mean you should be taking the Moscow metro alone late at night or roaming around by yourself on the streets of St Petersburg at 1 am in the autumn.

It’s important to carry some identification with you at all times. A copy of the passport, visa and registration papers is a must. Identity checks by policemen are not uncommon in Russia, but again, it’s unlikely that you will be stopped by a policeman unless you give him a reason to be suspicious. Having identity papers on hand is also essential for any kind of emergency.

Don’t be a bookworm or a library nerd, but remember that your primary purpose in the country is to get a good education. Russian cities are full of tempting distractions from lovely and “free-minded” members of the opposite sex to those seeking out drinking buddies. Getting too involved in social life can be a death knell for your education.

On the whole, university life in Russia can be absolutely rewarding. Make the most of your time in the country and enjoy its glorious nature, interesting cities, beautiful culture and hospitable people.