Obama too weak to lead – even from rear 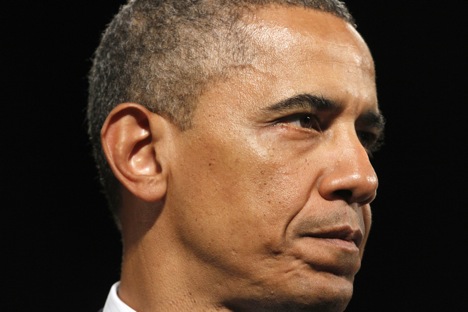 The best American hope would have been the semblance of a Middle East peace process under its auspices on a parallel track that would boost its overall credibility in the region. But Israel refuses to see things that way. Source: AP

The Obama administration lacks the will power to pressure Israel to stop the expansion of settlements in occupied territories. Washington is facing a huge loss of influence in the Middle East.

The feather on the US secretary of state John Kerry’s hat is falling even before he could pin it down. The Israeli move to authorise 1200 new homes to be built in settlements in West Bank and East Jerusalem leaves Kerry stranded just as he was taking credit for ‘kick starting’ the Middle East talks, which he brokered after much shuttle diplomacy in the region.

Like the saying goes, you can bring the donkey to the water but you can’t make it drink. Israel is a reluctant participant in Kerry’s project. It is not willing to enter into any serious negotiations but Prime Minister Benjamin Netanyahu is also under pressure from within his camp to be seen consorting with the peace process. So, he decided that the best thing he could do is to give a kick to Kerry on the backside to give him a good sense of the ground reality.

Kerry, nonetheless, has chosen to pretend he hasn’t been kicked where it hurts. He puts on a brave face and insists that the kick was “to some degree expected” and he doesn’t think Netanyahu’s provocative move to announce new settlements would snowball into a “speed bump” to derail the peace process. Meanwhile, Kerry has urged the Palestinians “not to react adversely.”

On the last point, Kerry may have some residual influence but he is on shaky ground. Who are the Palestinians he is addressing? Evidently, Hamas is out of it all. Its rejectionist stance is now further vindicated and the legitimacy of the West Bank-based Palestinian president Mahmud Abbas to sit down with the Israelis under the American umbrella gets further eroded with the Israeli announcement of new settlements. This is notwithstanding the fact that Netanyahu has also held out a carrot to Abbas to nibble by announcing that he intends to release a batch of Palestinian prisoners languishing in the Israeli jails.

Furthermore, unwittingly though, the US and Israel could be inciting the Hamas to speed up a rapprochement with Iran and the Hezbollah. There is already some talk that Qatar’s new emir, 33-year old Sheikh Tamim bin Hamad al-Thani, in a calibrated distancing from political Islam altogether and an incremental ‘course correction’ toward the camp of Saudi Arabia and the US, is asking the Hamas leadership to relocate from Doha – and the new watering hole for Hamas could well turn out to be Beirut. If so, the wheel of ‘resistance’ will have come full circle. Tehran, of course, never really turned its back on Hamas and it is entirely up to the latter to figure out its place in the scheme of things.

The Egyptian military is stepping up pressure on Hamas for a variety of reasons – as part of the crackdown on the Muslim Brotherhood as well as to accommodate US-Israeli expectations and demands. The movement of Palestinians from Gaza is being severely restricted. Recently, Cairo rebuffed Turkish Prime Minister Recep Erdogan by refusing permission to him to visit Gaza.

Taking all factors into account, Israel is making hay while the sun shines, as they say, by pressing ahead with the settlements, undermining any scope for peace talks and on a parallel track doing all it can to divert attention to the Iran question. All this leaves Kerry in the middle of nowhere.

Israel concerned about prospects of S300 missiles supplies to Syria

The crunch time comes if and when the Obama administration takes a concrete step forward to engage the new leadership in Tehran. Israel will surely go ballistic. The best American hope would have been the semblance of a Middle East peace process under its auspices on a parallel track that would boost its overall credibility in the region. But Israel refuses to see things that way.

Of course, there are ‘moderate’ voices in Israel too – such as the former spy chief Efraim Halevy – who predict that Israel is sliding down a slippery slope since sooner or later it will be so patently obvious – even to the Obama administration – that “Israel’s only goal is to hurt the chances for negotiations with Iran.”

Halevy writes, “I suggest that Israel officially announce its support for negotiations between the US and Iran that are aimed at removing the Iranian nuclear threat from the map of the world, and it will assess the results of these negotiations in reference to this goal alone. As long as this goal is not achieved, Israel will continue to have its finger on the trigger.”

All this only goes to highlight attention on the huge loss of influence that the US is facing in the Middle East. Any whichever way one looks at it, Kerry’s plaintive cry on the settlement issue underscores that the Obama administration lacks the will power to pressure Israel, and as Girian Levy, the well-known columnist of the Israeli daily Haaretz says in an interview with the Voice of Russia, here, “Without massive American pressure nothing will move.”