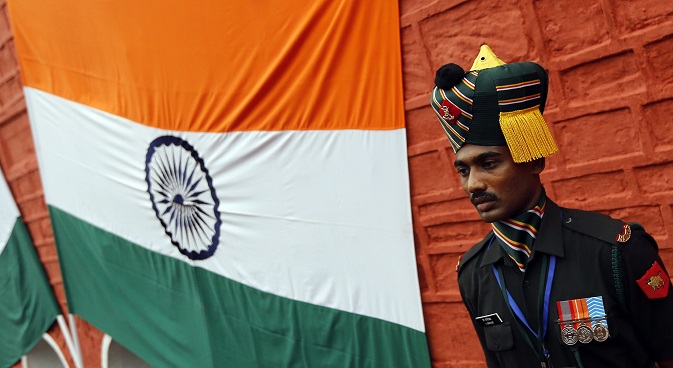 Russia’s association with India’s freedom struggle goes as far back as 1857. Source: Reuters

Russia’s association with India’s freedom struggle goes as far back as 1857 when it closely followed the First War of Independence. It ended with Moscow vetoing an anti-Indian resolution sponsored by the West during the 1961 liberation of Goa.

Russia first became interested in India’s freedom struggle after the cataclysmic war of 1857. Known as the First War of Independence, it was sparked by Indian soldiers revolting against the British East India Company. The rebellion spread like wildfire, with the peasantry, nobility, landless and even Hindu holy men joining the fight against the colonisers. The war, which lasted a year, was savagely fought. The British were defeated in most parts of India but managed to recover lost territories with the help of loyal Indian soldiers.

The reprisals that followed led to an “untold holocaust” says Mumbai-based historian Amaresh Mishra. In War of Civilisations he writes the vengeful British killed over 10 million Indians in a frenzy that has no parallel in history. Even faithful servants were murdered by English and Scot officers.

The slaughter was backed by influential people back in Britain. The author Charles Dickens called for a genocide of the Hindus. “I wish I were commander-in-chief in India … I should proclaim to them that I considered my holding that appointment by the leave of God, to mean that I should do my utmost to exterminate the race,” declared Dickens.

The magnitude of the genocide shook other European nations. The French newspaper L'Estaffette demanded that France “intervene in favour of the Indians, launch all our squadrons on the seas, join our efforts with those of Russia against British India”.

V.D. Chopra writes in the book, Significance of Indo-Russian Relations in the 21st Century: “The forward-looking Russians closely watched the various anti-imperialist movements in the last century and particularly India's first War of Independence in 1857 attracted their attention the most. They in fact were disappointed when the widespread risings in 1857 were brutally crushed.”

However, the Russian scholars continued to take interest in India. Notable amongst them was Ivan Pavlovich Minaev, Professor of Comparative Grammar at St Petersburg University, who paid three visits to India between 1874 and 1886.

He was present as an observer at the founding of the Indian National Congress in 1885. He described this event as a significant attempt for “the development of the feeling of nationalism in India, for the unification of India”.

The Russian advance into Central Asia in the 1860s and the settlement of Russians on the steppes in the 1890s alarmed the British, who started a forward policy aimed at stopping a Russian invasion in Afghanistan.

However, this only piqued Indian interest in the hitherto unknown giant, which was both Asiatic and European. According to Chopra, a feeling started growing in India that the Russians would help India in throwing off the British colonial yoke.

In 1905 the nationalist Bal Gangadhar Tilak – Mohandas Gandhi’s political guru – approached the Russian consulate and made enquires whether it would be possible for Indians to attend Russian military schools for training so that they could organise Indian forces against the British.

Russian thinkers played a formative role in Gandhi’s ahimsa or non-violence. Leo Tolstoy’s Letter to a Hindu greatly impressed the Indian leader. In an introduction to the letter, he quotes the Russian writer: “Do not resist evil, but also do not yourselves participate in evil – in the violent deeds of the administration of the law courts, the collection of taxes and, what is more important, of the soldiers, and no one in the world will enslave you.”

Tolstoy saw the incongruity of a vast nation – of fierce Rajputs, empire building Marathas, valiant Sikhs and South East Asia-conquering Tamils – being ruled by a few thousand people from a nation of shopkeepers.

Tolstoy wrote: “A commercial company enslaved a nation comprising two hundred millions. Tell this to a man free from superstition and he will fail to grasp what these words mean. What does it mean that thirty thousand people, not athletes, but rather weak and ordinary people, have enslaved two hundred millions of vigorous, clever, capable, freedom-loving people? Do not the figures make it clear that not the English, but the Indians, have enslaved themselves?

Tolstoy then quotes Lord Krishna: “Pitiful and foolish is the man who seeks what he already has, and does not know he has it.”

No doubt Tolstoy’s message of non-violence left a deeper impact on Gandhi than his guru Tilak’s advice that he forget non-violence and seek full freedom at all costs. Tilak soon died and it is one of the big ifs of history whether India would have got freedom sooner had he lived longer.

Paradoxically, it was a major Russian defeat that first fired up freedom fighters across Asia. The sinking of the Russian fleet by the Japanese in 1905 was seen as a turning point because for the first time in modern history an Asian nation had defeated a great European power.

However, it was the Russian Revolution of 1917 that shook the foundations of British rule in India. It led to the rise of the radicals in India who were now inspired to launch a fully armed guerrilla movement against Britain.

Russian leaders too reciprocated that interest. In 1908 when Tilak was convicted for sedition Lenin wrote: “At the infamous sentence pronounced by the British jackals on the Indian democrat Tilak, a question in the British House of Commons the other day revealed that the Indian jurors had declared for acquittal and that the verdict had been passed by the vote of the British jurors. This reprisal against the democrat by the lackeys of the moneybags evoked street demonstrations and a strike in Bombay.”

In 1912 the Russian humanist and writer Maxim Gorky wrote to the revolutionary Shyamji Krishna Varma, asking him to send an article for the Russian Review magazine that could give Russians knowledge of the Indian movement for liberty and justice.

Britain on the defensive

As the Indian masses entered the freedom movement, Britain changed tack. Shortly after the Russian Revolution, the cunning British declared their aim in India was “gradual development of self governing institutions with a view to the progressive realisation of responsible government in India as an integral part of the British Empire”.

Of course, all this was just way to buy time. For, Britain had a dual strategy for India. One, the British, right up to Prime Minister Winston Churchill, had no plans to give up India; indeed they planned to rule the country ad infinitum. That the plan changed just two years after the Nazis’ 1000 Year Reich ended is typical of the way most empires end – ingloriously.

Secondly, Britain had a secret Plan B. And that was to balkanise India so the hated Hindus would never ever be a great power. Pakistan was a Muslim project only in popular discourse. In reality it was a British idea that Indian Muslims were persuaded to swallow. In Britain’s view – later accepted by the United States – Pakistan was to be the staging post for destabilising Russia.

The Portuguese were the first to come and the last to leave India. While the British were kicked out in 1947, it was almost as if India had forgotten about the little Portuguese outpost in Goa. In 1961, India launched air, sea and land operations to free the territory.

The West’s reaction was vicious. The United States introduced a UN resolution supported by Britain, France and Turkey, deploring India’s action. American President John F. Kennedy told the Indian ambassador to the United States: “You spend the last 15 years preaching morality to us.... People are saying the preacher has been caught coming out of the brothel.”

However, Moscow vetoed the resolution. S.R. Sharma writes in India-USSR Relations – Volume 1: “The Soviet veto saved India from a very awkward situation as the West was determined to get a ceasefire and withdrawal resolution passed in the Security Council.”

According to Sharma, Soviet leader Leonid Brezhnev urged Indians to ignore Western indignation as it came “from those who are accustomed to strangle the people’s striving for independence... and from those who enrich themselves from colonialist plunder”.

It was the beginning of an enduring relationship.