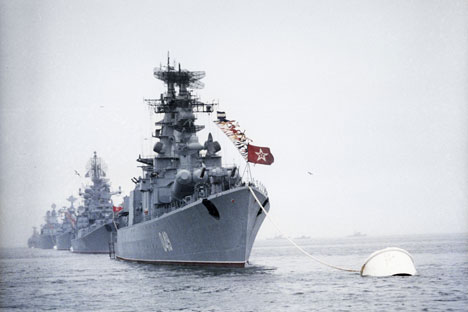 The job of the Indian and Russian fleets did not end after the 1971 war. Source: Yuriy Somov / Ria Novosti

Russia’s naval presence in the Bay of Bengal, which prevented a joint American-British strike on Indian cities, did not end after the 1971 war. Russian ships stayed on for two more years, clearing mines from the delta and recovering gold dumped in the sea by the Pakistanis.

On December 10, 1971 at the peak of the India-Pakistan war, Russian intelligence tracked several British warships, led by the aircraft carrier Eagle, moving towards India’s west coast. The advance of the British fleet was aimed at applying pressure on India and lifting Pakistani morale.

In response, Moscow despatched the 10th Operative Battle Group of its Pacific Fleet under the command of Admiral Vladimir Kruglyakov. Seeing the Russian ships the British retreated but the threat to India did not go away as the United States sent its mighty Seventh Fleet to show its support to Pakistan.

To bolster its flotilla in the Bay of Bengal, the Pacific Fleet in Vladivostok sent cruisers, destroyers and nuclear submarines, which encircled the US Seventh Fleet. The Americans backed off and India was able to finish the job of liberating Bangladesh and end the genocide of Bengalis by the Pakistan Army.

However, the job of the Indian and Russian fleets did not end after the war. There were two reasons. One, a few hours before Pakistan surrendered, the Pakistan Navy had dumped into the sea a huge quantity of looted gold and silver jewellery and six large trunks of gold taken from the National Bank. Bangladesh, the new country which emerged out of the ruins of the war, now wanted to recover this treasure.

Secondly, the Indian Navy’s midnight missile strikes on Karachi harbour had impacted the morale of Pakistani forces in the east as well. The presence of the aircraft carrier INS Vikrant had forced the Pakistan Navy ships to stay in harbour. Unable to break out into the open sea and meet up with the US Seventh Fleet, the Pakistanis had mined the harbour entrance.

So without a break after the war, the Indian Navy went into minesweeping mode. There was a reason for the urgency. In his book, Transition to Triumph: History of the Indian Navy, 1965-1975, Vice-Admiral G.M. Hiranandani writes that even as the minesweepers were on the job, one loose mine got caught in a fishing net. “An unsuspecting Bengali fisherman took it ashore, believing it to be some sort of treasure. As he tinkered with its horns, the mine exploded, killing 15 villagers and burning down their homes.”

Indian crewmen at great risk to their lives performed a heroic role, clearing as many mines as they could with their limited experience and a handful of vessels. To minimise injury, all personnel were told to remain on the upper deck.

“The minesweeping operation off Chittagong was the Indian Navy's first real encounter with live mines,” writes Hiranandani. “For nearly 12 months, these small, over-aged minesweepers operated 2500 miles from their home base in Bombay and 600 miles from the nearest naval base in Visakhapatnam, without proper logistic support, in extremely hazardous conditions, in a port ravaged by war. Both officers and men came through the arduous experience well and with confidence. The minesweepers, however, needed extensive repairs for several months before their operational capability could be restored.”

The Hague Convention requires that if mines are cut loose or become adrift, they should be automatically rendered harmless.  But the Pakistanis – true to form – had not played by the rules. For, the mines they had laid off Chittagong and in the delta did not comply with this requirement. In fact, the drifting mines behaved in a random and unpredictable manner.

The Indian Navy then tried some old fashioned interrogation of Pakistani naval officers. Based on the intelligence obtained from the interrogation, Indian Navy crews were able to make a fairly reasonable assessment of the location of the mines and the depth to which they were placed.

A large number of mines were defused or exploded. But the operations ended shortly after the navy’s minesweeper Bulsar hit a mine and suffered extensive damage. Moreover, the navy did not have the capability to clear the entire minefield at Chittagong or clear the wrecks of ships and cranes (destroyed in Indian airstrikes).

There was also a political reason for the end of the sweeps. New Delhi was sensitive to Bangladeshi fears that the Indian military was an occupying force, and so it directed that all Indian armed forces were to be withdrawn by March 25, 1972.

How India brought down the US’ supersonic man

Bangladesh requested that Indian minesweepers continue their work but at the same time it sought the Russian Navy’s assistance to clear the wrecks in the rivers of Bangladesh and off Chittagong.

Two months later Russia and Bangladesh signed a bilateral protocol for salvage and minesweeping, which aimed at clearing all mines off Chittagong by the end of the year.

“It was agreed that in view of the need for Indian minesweepers to undertake long overdue maintenance and repairs….the responsibility for check minesweeping would be taken over by Russian minesweepers,” writes Hiranandani.

India therefore withdrew its remaining minesweeper in November 1972. This brought to a close the Indian Navy’s minesweeping assistance to Bangladesh. The Russian Navy also withdrew most of its vessels, leaving only two ships to carry out sweeps till December 1973.

With most of the mines out of the way, Bangladesh requested the Indians and Russians to salvage the treasure lying at the bottom of the sea. Diving operations commenced in October 1972. However, the tides had probably dispersed much of the dumped treasure. Plus, visibility in the waters was not good. Under the circumstances, the total recovery of 52.75 tolas of gold, 70.05 kg of silver and coins worth almost Rs 2.2 million, wasn’t bad at all.