The wave of nostalgia continues 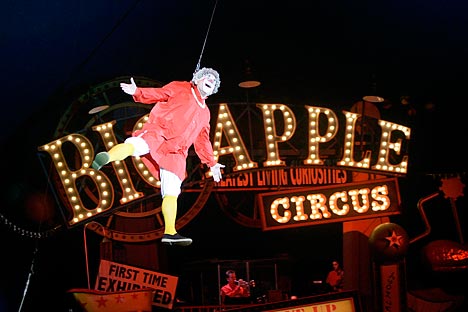 How a Soviet diplomat was impressed by a Russian circus.

I first met Sergei Shestakov back in the late ‘90s, somewhere in Moscow — perhaps near the circus, perhaps somewhere else. “Ni vazhna,” as they say in Russian.

I could tell from afar that he was a circus lover, too.  As we set about comparing notes and telling tales, it turned out that he was a former career diplomat who had spent his career hanging out with Soviet foreign service employees.

Nostalgia for a common Russian home

He was a big wig with a fancy title — chief of staff to the Soviet ambassador to the United Nations. Sounds like a lot of running around, if you ask me.

But, he said, it was an opportunity to meet and greet the artists and the cultural programs that arrived from the former Soviet Union in droves to New York during the era of “Gorby” fever.

From dancing ballerinas to dancing bears, Shestakov got a chance to see it all and meet the artists up close and personal.

Memories of wacky circus performers still dance in his mind, some 20 years later.

He recalls a moment when an American music producer decided to pair up a Russian circus high-wire artist with another young New York native. The hope was to produce a hit single that would go platinum. It never did.

But it’s not the acts he recalls so much: It’s the people who performed them, their outgoing personalities, egos checked at the doors, and a life of cultural exchange that was definitively cooking.

These days, New York City could use some beefing up, he explained over the phone. The presence of Russian cultural events (we’re not going to mention the Moscow Circus again) seems to have disappeared like an iPhone dropped in a crowd.

New York’s Russian life, in fact, is a bit on slow side these days, he said.

Sergei doesn't hang out at the U.N. anymore. He's a TV VP executive at Russian TV International. Maybe he’ll put some old circus shows on the air. It would be nice to get a blast from the past.