The man who stopped World War III and sacrificed his career 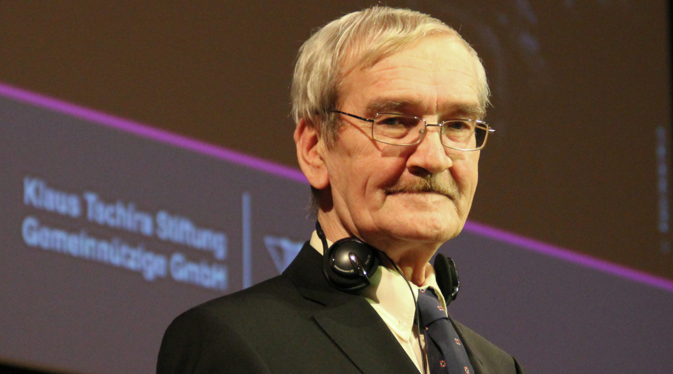 Stanislav Petrov became a celebrity in the West. In February 2013 he got the Dresden Peace Prize. Source: Sergey Pirogov / Ria Novosti

Exactly 30 years ago, when early warning systems indicated the Soviet Union was under nuclear attack by the United States, air defence officer Stanislav Petrov went by gut instinct and decided the alarm was false. It was a decision that saved the human race – and ended his career.

Officers of the elite Soviet Air Defence Force are about to begin their night shift at the top secret installation. Their commander, Lieutenant Colonel Stanislav Petrov, 44, pushes back in his chair and is prepared for what he thinks is yet another routine watch, when suddenly the silence of the bunker is shattered by wailing sirens.

The officers look up as their giant screens come alive and the consoles start flashing, indicating that Russia is under nuclear attack. More alarmingly, the red button near the commander’s chair starts pulsing. It’s the doomsday button for initiating the launch of thousands of Russian missiles against the West.

Petrov is an experienced hand, having been in the job since the early 1970s, but not even he is prepared to face the enormity of the crisis. His systems tell him a Molnya observation satellite has sent a signal to the bunker. After analysing the data transmitted by the satellite, the warning system’s computer concludes a single intercontinental ballistic missile (ICBM) carrying multiple nuclear warheads has been launched from the continental United States.

Even as the staff are in shock, the system announces a second missile launch, then another until five missiles in total are apparently streaking through space toward Russian cities.

The missiles will be over Russia in 30 minutes. Because the Kremlin will need 15 minutes to initiate launch, the men in the bunker have at most another 10 minutes to act. If they delay, the chance to retaliate will be lost – forever.

No time to think

As Petrov said later in an interview to the Voice of Russia, “For 15 seconds, we were in a state of shock. We needed to understand, what’s next?”

There was a lot of yelling going on. Electronic maps and consoles were flashing. His fellow officers reckoned one or two missile launches could be computer errors, but not a salvo of five missiles. This was surely the real doomsday strike. He had to push the button and set off the launch process. “It was not for nervous people,” he said. “There was such shock, bewilderment and confusion that it could have easily grown into panic.”

Gulag, guts and the globe

When you have the fate of the human race literally in your hands, panic is the last thing you want. Amidst all this cacophony, with time running out, Petrov did something that military men are not expected to do. Like Vasili Arkhipov, the 1962 Cuban Missile Crisis hero who refused to fire nuclear torpedoes against American ships despite grave provocation, the air defence commander defied protocol and opted not to validate the attack indications.

Yuri Vasilyev writes in Moscow News: “He was supposed to push the button. Because all the signs were that the US had launched a missile attack against the Soviet Union. It was his duty to push the button. After all, he – Stanislav Petrov – was the one who had written the instructions prescribing that particular course of action. But he did not push it.”

Petrov’s decision wasn’t entirely based on a mental roll of the dice. “When people start a war, they don't start it with only five missiles,” said. “You can do little damage with just five missiles.”

And he added: “Second, the computer is, by definition, brainless. There are lots of things it can mistake for a missile launch.”

How close was the world to war?

In Search of Missing U.S. Warplanes

Petrov was part of a chain of command with multiple checks that was created to prevent accidental or rogue use of Moscow’s strategic missiles. His primary task was monitoring satellite signals. He could escalate the matter to his headquarters, which reported to the Soviet general staff, who alone were able to consult with the political leadership on whether or not to launch a counterstrike.

Also, Russian ground-based over-the-horizon radars had not detected a launch. It is not known what transpired inside the Kremlin that night but it is unlikely the Russian leadership headed by Yuri Andropov would have unleashed their nukes without multiple confirmations, including use of the hotline to the White House.

However, what made the situation dangerous were the events leading to the crisis. The single biggest factor was Ronald Reagan. Starting in 1980 his presidency had gone after the Russians with a near evangelistic mission. “Many of his advisers had long advocated modelling and actively planning for nuclear combat,” writes Nicholas Thompson in Wired. “These were the progeny of Herman Kahn, author of On Thermonuclear War and Thinking About the Unthinkable. They believed that the side with the largest arsenal and an expressed readiness to use it would gain leverage during every crisis.”

The Soviet leadership, which was obsessed with the possibility of a surprise nuclear strike by the United States, sent instructions to its intelligence agents around the world to look for evidence of preparations. The picture that formed in the Kremlin was that like Adolf Hitler’s sweeping attack on Russia in 1941, Reagan and his cohorts were planning something similar.

In fact, under Reagan the Americans were indulging in dangerous brinkmanship that could have easily tripped the nuclear wire. The United States unleashed a series of psychological warfare exercises, such as sending naval forces and strategic bombers into forward areas near Moscow’s strategic bastions.

Worse, just three weeks earlier there had been a big chill in relations after the Soviet Union shot down a Korean Air plane that had suspiciously strayed hundreds of kilometres deep inside Russia. Among the over 200 dead was an American military officer and Washington had described the shooting as another murderous act of the “evil empire”. (It is entirely another matter that the plane was most likely sent to its death by the Americans as part of a multi-pronged surveillance exercise involving spy satellites and SR-71 spy planes)

Petrov had entered the perfect storm. As he summed up, “Had we gone ahead, there would be no America now.”

It was subsequently determined that the false alarms had been caused by a rare alignment of sunlight on high-altitude clouds and the satellite’s highly eccentric orbit.

Petrov saved the planet that day but he exposed the flaws in a system that had been built at great cost. In the dystopian Soviet system, to reward him would be a slap in the face of the elite Soviet forces. So he was punished.

During his audit, Petrov was asked stupid questions such as to why he did not maintain a log. He was not sacked but was never made full colonel upon retirement, which impacted his pension significantly.

However, after the end of the Soviet Union, Petrov’s superiors publicised his heroism and he became a celebrity in the West. In February 2013 he got the Dresden Prize.

Following the incident, Moscow decided to speed up the installation of a more robust – and secret – system known as Perimeter. It was designed to survive saturation nuclear bombing by the West, and remain dormant during the Armageddon phase; in the absence of contact with humans it would assume the worst and automatically unleash “command nuclear missiles” at the West. The system is still up and running but the Russians have now decided to lift the veil of secrecy as an element of détente.