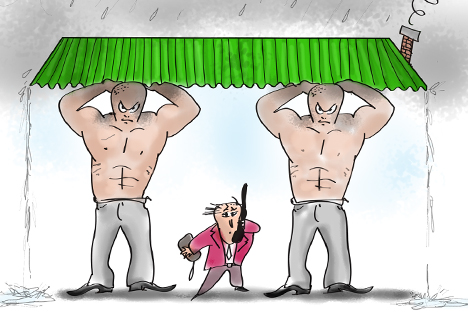 Matryoshka, kolhkoz, sputnik, perestroika—all of these original and untranslatable words have been borrowed in other languages from Russian at one time in history or another. This happened recently with another Russian word—krysha—in English.

The word krysha itself is not new and simply means “roof.” However, when the word could be heard with incredible frequency during the court case of Russian oligarchs Roman Abramovich and Boris Berezovsky, people started to ask how a word for an everyday object could be used in a socio-economic sense and what it could mean in such a context.

The word krysha in Russian means something that protects a person from unwanted outside influences. In the 1990s—the era of fledgling post-Soviet business—small businesses were often targeted by racketeers who imposed levies on them. To deal with the problem, businessmen were forced to turn to those who could offer them protection. The police back then were ineffective in this role (in fact, they were often in league with the racketeers, taking a percentage of the money “taxed”), so it was often rival racketeers who offered their services in the form of a krysha.

Learn Russian language with us

Racketeers did not do this out of the goodness of their hearts, of course; but the money these “good racketeers” received for their “roofing services” was at least earned honestly—through the hiring of professional security guards. Soon enough, just about every business in Russia was covered by some kind of krysha (which gradually evolved into legitimate security agencies), and each krysha had a clearly demarcated sphere of influence (usually following bloody clashes).

The next step was to get officials in on the deal—people who could control the whole process on an official level. Street kryshas thus became a thing of the past (as did the razborkas, or gangland showdowns), and were replaced by government-run kryshas. This is quite understandable, as these officials often turned out to be former crime lords who had realized that legitimate power opens up qualitatively different opportunities than a street racket with enemies does.

This transformation of criminality into “the establishment” was dealt with at the end of Alexei Balabanov’s black comedy “Dead Man’s Bluff,” in which two likeable lads from the provinces who had been drug dealers and killers in the 1990s become present-day State Duma deputies and lament bitterly: “What’s happening to the country?!”

Thus, the protection racket model gradually began to permeate the entire economic system in Russia. When multi-millionaires Roman Abramovich and Boris Berezovsky talked about kryshas, they were of course referring not to small-time gangs, but to high-ranking people within Yeltsin’s administration.

In Russian, the word krysha has yet another metaphorical meaning, and it exists in English as well; it is present in the lyrics of Bloodhound Gang’s hit single “Fire, Water, Burn,” for example (“The roof is on fire”). As slang, krysha means a person’s head, or, more accurately, his or her consciousness or mind, which can be weakened or obscured. The point is that, if the roof “is on fire” in English, then it can “move” in Russian.

Is Russian as difficult to learn as they say?

There is a popular joke in Russia about a man who wakes up in the morning with a pounding headache, unable to remember much of what had happened during the previous night’s bender. He sees a note on his bedside table that reads: “I’ve gone out. [Signed,] Your roof!” The phrase “his roof has been blown away” is used to mean that a person has gone completely crazy, while “his roof is smoking” means intense mental activity (although, in Russian, it’s not likely to be “on fire”).

The word cherdak, meaning the uninhabited space underneath the roof (i.e., the attic), is used in a similar context. Take the saying “he’s got cockroaches in the attic,” for example: It means that a person has gone slightly loopy and done something stupid, possibly under the influence of drugs.

The word krysha also has a diminutive form—kryshka—that usually refers to the uppermost part of some kind of container or receptacle (for instance bottles, teapots, boxes, etc.). Just like krysha, kryshka also has a second meaning, but one that is completely the opposite of “protection.” The phrase “It’s the cap for him” means a person is in mortal danger—in other words, “he’s done for.” Here, the word kryshka is a reference to a coffin lid.

So, in Russian, if “your roof has been blown away,” it doesn’t mean that “it’s the cap for you.”