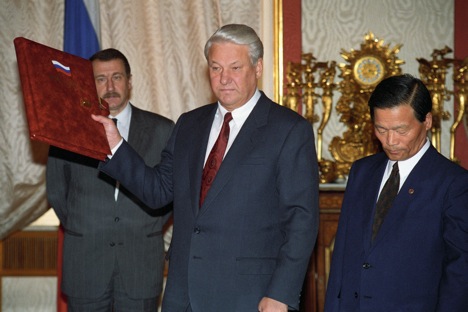 Cold War brinkmanship and suspicions were responsible for the downing of KAL 007 carrying 269 passengers and crew over Sakhalin 30 years ago. But was the civilian aircraft a participant in an American spying operation?

A Korean Air Boeing 747 carrying 269 passengers and crew from Anchorage, Alaska, to Seoul, South Korea, is 587 km off course – a world record in the history of civil aviation. For five hours and seven minutes the aircraft flies undetected over the most heavily defended airspace in the world, in a region that is a hotbed of superpower reconnaissance activity.

When Soviet radar finally discovers the bogey, officers at the secret Sokol air base scramble a Sukhoi-15. The supersonic aircraft, piloted by Lt Col Gennadi Osipovich, approaches the 747 from the rear. He levels up alongside the 747 and fires three warning bursts – totalling 520 rounds – from his canon. Osipovich is hoping to force land the intruder, but he sees the Boeing trying to evade him.

Having positively identified the intruder as a foreign aircraft, Soviet ground control officers order Osipovich to shoot it down. He fires two air to air missiles which explode 50 m from the 747. Minutes later the aircraft hits the ocean. There are no survivors.

The man who stopped World War III and sacrificed his career

Reactions in the West were of horror and indignation. The Ronald Reagan administration propagated the view that – the eerily numbered – KAL 007 had accidentally drifted off course. “This is the best chance we ever had to paint those bastards into a corner,” crowed senator Jesse Helms. The American media gleefully played up the incident as “murder in the air”.

The Soviets insisted the airliner was taking part in an elaborate reconnaissance exercise. “The sophisticated provocation masterminded by the US special services with the use of a South Korean plane is an example of extreme adventurism in politics,” said President Yuri Andropov.

However, it was such a huge PR debacle the Russians never had a chance to get in a word edgewise. It was best summed by an exasperated Marshal Nikolai Ogarkov: “What was left to us?”

Over the years, several experts have veered around to the view that the chances of flight KAL 007 drifting hundreds of kilometres due to navigational error are smaller than small.

Despite autopilot and advanced monitoring tools, pilots and crew do not sit around idle during long international flights. “Aircraft fuel usage, winds aloft, weather and ground speed all have to be monitored, flight logs kept and checkpoint reports prepared. Every checkpoint required the flight to notify ATC of position, altitude, fuel remaining, wind direction and speed and the ETA of the next checkpoint.”

The Korean Air 747 was equipped with the most sophisticated, computerised navigational aids. Basically, if the equipment works, an airliner cannot stray off course. If it doesn’t work, the warning mechanisms in the plane and on the ground are certain to alert the pilot within seconds. Yet almost after takeoff from Anchorage, KAL 007 strayed from its designated course.

In his book Shootdown: The Verdict on KAL 007, Oxford political scientist R.W. Johnson says he tried to estimate the odds of the aircraft veering off course by ignoring all these safety checks. He gave up when he reached odds of one quintillion (1 followed by 18 zeroes) to one.

The American military’s advanced spy satellites and wide range of reconnaissance aircraft are useful spying tools, but there was no way they could have probed Soviet radar defences without sending in an aircraft.

According to Johnson, the growing Soviet Naval presence in the Far East, and in particular the Typhoon submarine base at Petropavlovsk, were of great interest to the United States, as were the Soviet air defence, radar, command, communications, control and intelligence (C3I) systems in the area which provided the necessary and interlocking protective network over and around these key installations.

“No doubt the discovery in June 1983 that a vast new Soviet radar was being built (in Krasnoyarsk) in the hinterland behind this defence complex was a further spur to such curiosity, but no doubt the US was hungry for more intelligence data about this area anyway,” writes Johnson.

“There is also no doubt the prolonged incursion of KAL 007 into Soviet airspace just three months after the Krasnoyarsk discovery had the effect of producing voluminous and invaluable extra intelligence about every sort of Soviet radar, air defence and C3I system in the area.”

Johnson adds the 007’s pilot fiddled his fuel papers to take on five extra tons of fuel; he inexplicably left paying cargo behind at Anchorage; he also left behind notes (reproduced in Johnson’s book) in which he appears to have been planning the route he actually took (587 km off his proper course); he executed at least three navigational turns which could only have been conscious; he systematically misreported his position at every waypoint, each one a required occasion for a further course-check; he flew at widely varying speeds quite outside the scheduled speed ‘envelope’.

The Korean aircraft also mysteriously used the wrong transponder code; carried ground-mapping weather radar which would have clearly shown it was over Soviet territory; when finally challenged by a Soviet fighter, the pilot falsely informed his ground control he was carrying out a climb while in fact he was diving.

In an interview to the Moscow journal Nedelya in April 1986, Col Gen of Aviation, Nikolay Moskvitelev, Deputy Commander in Chief for Aviation of Air Defence Forces, said it is even more indisputable today than before that the Boeing was a reconnaissance plane.

“The aircraft's takeoff from Anchorage was held up 40 minutes in order to synchronise the time of the Boeing's approach to the shores of Kamchatka and Sakhalin with the flight of the Ferret reconnaissance satellite,” says Moskvitelev. “That satellite is designed for conducting radiotechnical reconnaissance over the broad range of frequencies on which the Soviet Union's radioelectronic facilities operate.

“Just prior to the violation of USSR air space by the South Korean aircraft, there were two RC-135 reconnaissance aircraft, an Orion aircraft, an E-3A AWACS aircraft and a Badger frigate in the area. Nor does the assertion the Boeing ‘became lost’ or ‘strayed’ stand up to criticism. The entire flight of the intruding aircraft was carried out not just in a zone accessible to air traffic control facilities, but also within the effective zone of the American LORANS-C radio navigational system, which makes it possible to determine an aircraft's true coordinates with great precision at any time.”

Former KGB officer Alexander Levchenko, who lived in Korsakov, the southernmost port of Sakhalin, in 1983 told RIR: “We started receiving alerts from March 1983 from reliable sources that the Americans would be sending reconnaissance aircraft over Sakhalin and the Kuriles. These were passed on to the air defence stations.”

Levchenko, 67, retired from the FSB in 2011. He says back in those days there were frequent attempts to provoke Soviet air defences.

Oliver Clubb, a political scientist at Syracuse University, charges that the United States bears a major responsibility for the terrible tragedy. He says Reagan was employing a gross hypocrisy to cover up American culpability.

American journalist Seymour Hersh argues the responsibility for the downing of the Korean airliner went far beyond ordinary governmental decision making and into the murky sphere of superpower intelligence calculations and confusion. He says the catastrophe followed more from Soviet ignorance than viciousness, and that the whole episode demonstrates how the superpowers are more interested in gaining political advantage than the truest understanding of events.

Hersh’s claim was later backed up by a Soviet defector who said Russian air defences were blinded because Arctic gales had knocked out key warning radars 10 days before the ill-fated flight. That explains the plane flying undetected for several hours.

Businessman Roman Kulishov, 52, who lives in the Yuzhno-Sakhalinsk area, sums up the tragedy of KAL 007. “We were obviously sad that so many innocent people had died. They were pawns in the great game of the Cold War.”

(With reports from Ajay Kamalakaran)