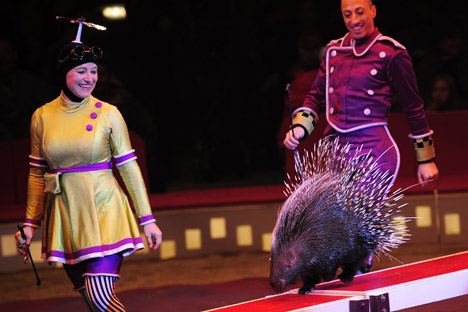 Many private circus companies, in responding to the changing attitudes toward animals in the global circus market, have eliminated large animals from their program, keeping their animal acts to cats and dogs, and sometimes horses. Source: AFP / East News

These days, you cannot discuss the world of circus without bringing up the “animal question.”

While thoughts about the circus mostly bring up feelings of happiness, wonder, excitement, or even fear—like when an aerialist hangs upside down from a single trapeze—the animal question has been the focus of much attention in the last decade by circus-goers worldwide.

These days, lots of people think that animals—such as trained bears that ride on bicycles or who roller skate around the ring, or  even lions and tigers kept locked in cages—simply don’t belong in the circus at all, because, they say, both the living conditions and the training techniques are abusive.

For many, it’s the training techniques that are the problem. In order to get a monkey to play a musical instrument, for example, trainers have been known to avoid feeding them until after their training sessions, or even to beat them with a stick.

Earlier this year, a YouTube video in Russia filmed by a cleaning lady in a circus captured a trainer beating his monkey on hidden camera.

The video was so disturbing that it went viral, even causing Russian Minister of Culture Vladimir Medinsky to suggest that animal trainers in Russia be licensed: When problems arise, licenses can be revoked.

In 2009, seven circus tigers died while being transported by truck in Siberia. Two of them were Siberian tigers, which are an endangered species.

In some countries (Britain, for example), large circus animals such as lions and tigers have been banned from the country altogether.

In other countries such as America, individuals found guilty of abusing or neglecting their animals can be sentenced in a court of law and even sent to prison. This doesn’t just apply to circus animals: It can be any animal at all. In fact, most animals that are found to be abused in the U.S. are dogs.

Many private circus companies, in responding to the changing attitudes toward animals in the global circus market, have eliminated large animals from their program, keeping their animal acts to cats and dogs, and sometimes horses, which can be easily trained. Others, like Cirque du Soleil, have no animals in their shows at all.

Those training large and wild animals for the circus argue that this is what the circus traditionally is about—not just tricks performed by artists, but by animals as well.  For many children, they explain, this is the only place they can see animals such as bears and zebras up close.

They also point to the history of it all.

It’s a tradition, they say, that goes back to the original days of the circus, which was started by acrobats doing tricks on the backs of galloping horses running in circles. The inventor was an Englishman named Phillip Astley, who seriously started developing the performances in England by 1770.

However circus-goers feel about the animal issue, one thing is for sure: The discussion about their place in the red ring is not going to go away.