The snipers of Black October 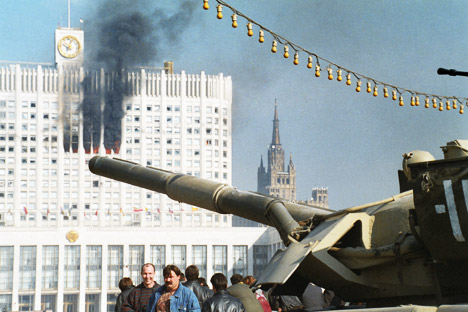 The conflict between President Boris Yeltsin and the State Duma ended with the shelling of the Russian White House. Source: Itar-Tass

Twenty years ago Boris Yeltsin’s army and elected Russian parliamentarians clashed in Moscow, resulting in hundreds, even thousands, of casualties. Investigations now suggest the bloodbath was sparked by snipers, some of who were perched on the roof of the American embassy.

The place: Outside the Russian Parliament, Moscow.

Russian Army tanks are approaching the White House, the new Parliament building. Inside the 18-storey marble building representatives of the regions and republics of the Russian Federation and its autonomous regions, along with their supporters, are holed up after a constitutional standoff with President Boris Yeltsin.

Altogether there are nearly a thousand people inside the building on the banks of the Moskva River. Some of them are armed and prepared to die defending what they see as a Russian sanctuary where democracy has returned for the first time since 1917.

Outside the White House thousands of supporters of the deputies have barricaded themselves. Interior Ministry troops and riot control police loyal to Yeltsin are arrayed on the other side.

As dawn breaks over Moscow, Regiment 119 of the Russian Airborne Forces marches towards the White House. As they approach the building they come under indiscriminate fire. The Regiment Commander orders his troops not to return fire as he’s not sure which direction the bullets are coming from. Under fire the troops approach the walls of the White House. Five regiment soldiers are dead and 18 are wounded.

All hell breaks loose now as Yeltsin orders his tanks to fire at the White House. The deputies fire back with their Kalashnikovs but they are no match for the heavy tank rounds. Within a few hours, 187 people are dead and 437 wounded, according to official sources, while estimates from non-governmental sources put the death toll at as high as 2,000. It is the deadliest street fighting in Moscow’s history since the October Revolution of 1917.

Back then the thinking was the hot-headed among the deputies started shooting at the military and then Yeltsin had no option left other than to order retaliatory fire. To ensure the safety of the thousands of Muscovites gathered in the area, the siege had to end at all costs.

Russian author Nikolai Starikov begs to differ. In his book Rouble Nationalization – The Way to Russia's Freedom, he has exhaustively interviewed and quoted Russian military commanders on ground zero who told him the first shots did not come from the White House.

Starikov says Viktor Sorokin held the post of Deputy Commander of the Airborne Forces that was fired at. About the five men that Regiment 119 lost during its approach towards the White House walls, here is what General Sorokin said at a Special State Duma Commission session, according to a verbatim report cited by Dmitry Rogozin, former Russian ambassador to NATO: “They were shot from the back. I saw it with my own eyes. “Fire was coming from the roof of the American Embassy, from the bell tower near Hotel Mir. All our soldiers were shot from the back. I do not know who the shooters were, but I could make a guess.”

In his book Yastreby Mira (Hawks of Peace) Rogozin mentions the exchange he had with General Sorokin.

Rogozin: You said fire was coming from the rear, so the soldiers were shot in the back. Did you realise it after the fighting or during the course of it? If you had ordered to shoot back, why were these firing points not covered? What do you think of the shooters? Who were they?

Sorokin: I ordered not to shoot in the direction of the American Embassy. Soldiers were moving in waves, so that while one group was moving, the other was covering it. I strongly prohibited shooting at the embassy, to prevent further questions.

But the young soldiers were not the only victims of Black October. Starikov says, “Many residents of Moscow were shot by mysterious snipers – the American Embassy was not the only firing point. They shot at passersby. Their aim remained the same – to imitate ‘crimes’, stir up a rebellion, and incite fratricidal war.”

In Starikov’s view the shooters were not amateurs, but high-ranked professionals. How does he make that assessment? “Remember the shot made at Gennady Sergeev, a Special Forces officer, in front of the White House,” he says. “The bullet went in between the lower edge of his helmet and the upper edge of his bullet-proof vest.”

Rogozin says he has “documented testimonies describing several cases of FSB and Interior Ministry surveillance (personnel) coming up to the commanders of paratroopers and Taman soldiers under fire, to inform that the fire was initiated by friendly troops – government snipers, and unknown snipers from the roofs of the American Embassy and its residential area.”

Most Russians indifferent to 1991 coup attempt that hastened Soviet collapse

But even such provocation did not make the commander of the elite Alpha forces Gennady Zaytsev storm the White House. In fact, he disobeyed a direct order to storm the building issued by Yeltsin, who was by now hopping mad. Zaytsev backs up General Sorokin’s view: the shot that hit Sergeev “did not come from the White House, I am absolutely sure. This (was) a mean act aimed at making ‘Alpha’ members lose their temper and make them rush in and start smashing it all up”.

Reason to raise the stakes

According to Rogozin, “Yeltsin received the go-ahead from the West to dissolve the Parliament. Just think it over – Parliament was shot at by tanks! And Western democracies did not say a word about it. Why? Because it was in October 1993 when the privatisation of Russia’s natural resources was under consideration. Along with the final privatisation of the Russian rubble.”

(Rogozin is not entirely correct here. The Western democracies did not remain silent spectators. Amidst the carnage they, along with the likes of CNN and BBC, were cheering from the sidelines)

Indeed, under the influence of the IMF, Goldman Sachs and other American advisors, Yeltsin wanted to throw the Russian economy under the bus. Even as Russian incomes halved, he wanted to privatise everything including the crown jewels of Russian industry. Yeltsin had a key motive to send Parliament packing – only the deputies stood before his IMF-backed plans to allow all state enterprises to die. Think about it – there would be no Sukhoi, MiG or Gazprom today.

Against all tenets of democracy

The way a democracy is supposed to work, when you are impeached by your own Parliament, you walk. Instead Yeltsin, propped up by his Western backers, used the most undemocratic means a president could think of – call in the army.

Ironically, the vast powers that are now concentrated in the Kremlin, and about which the West carps so much are a legacy of Black October when Yeltsin usurped power, banned newspapers and clamped down on opposition parties. Strangely, the West applauded these acts.

A backlash was inevitable. Fed up of his kowtowing to the West, Russians gave Yeltsin – and his era of humiliations – the boot.

According to Starikov, unknown snipers acted in a similar fashion in Kyrgyzstan, Iran, Thailand and Romania, targeting women, children and youth, the segments of the population that government forces are least likely to fire at.

In each of these countries, sniper intervention came only when Western diplomacy was seen to be failing.