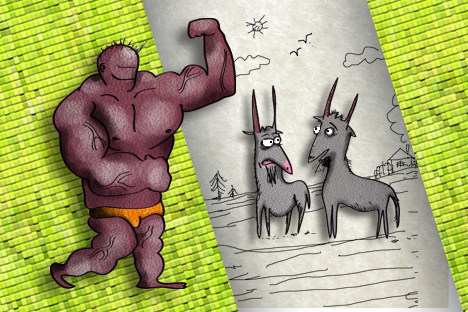 The sentiment all Russian words for “woman” share is probably love; for “man”, that sentiment is undoubtedly friendship.

“One man is a friend, comrade and brother to another," goes an old Soviet propaganda slogan describing the ideal state of relations between Soviet people in a communist society of the future. If we strip that slogan of ideology, it turns out that the individual words that make it are still in use, even though they have acquired somewhat different meanings.

Friend (droug) is a word that has only positive connotations in Russian. “It’s better to have a hundred friends than a hundred rubles,” a popular Russian proverb says. The important thing about friends, however, is how good they are, rather than how many of them a man has. Every man is supposed to have one best friend, the most loyal friend, who is always ready to come to the rescue even in the most difficult situations.

The word comrade (tovarishch) denotes a somewhat looser association; it does not imply mutual readiness for sacrifice, for example. Besides, comrade is still associated with the old Soviet ideology; the word was the compulsory official form of address for men and women alike in the Soviet Union. For simple acquaintances, there is another Russian word, priyatel.

Brother, meanwhile, has undergone the most peculiar evolution in recent years. When a man calls his friend brother (brat), the implication is that the relationship between them is closer than simple friendship.

In the 1990s, however, the word bratva, meaning literally “a band of brothers,” came to denote mostly young men belonging to semi-criminal groups, or gangs. One of the most popular songs of the 90s was Brothers, Don't Shoot Each Other.

Another word used for members of these groups is patsany (plural for patsan, or lad). Previously, a patsan was merely a rowdy teenager. In the 90s, however, patsany became a whole new social group, with its own slang, ethics, and norms of behavior.

Those members of that group who conform to these unspoken norms are sometimes praised by their fellows as a "chetkiy patsan", as in “a patsan who plays by the rules.” The typical popular image of a patsan is a working-class male in his late teens or early twenties, dressed in a track suit, squatting idly on his haunches, drinking beer, and shelling sunflower seeds, which used to be the Russian equivalent of crisps. Actually meeting such specimens in the street, however, is much more difficult these days than it used to be.

My guy (moy paren) is what Russian girls call their boyfriends, although the word boyfriend itself was also borrowed from English quite a while ago and is now widely used. A man who is friendly, generous and open-hearted is described as being svoy v dosku or rubakha-paren.

If a young girl maintains a romantic relationship with a wealthy and much older man, that man is called papik (daddy, the Russian equivalent of sugar daddy). Someone who is athletic and heavily muscled is a kachok (pumper, from pumping iron). A bespectacled and scrawny intellectual focused on his studies to the exclusion of all else is often derisively called a botanik (botanist).

Arguably the most popular Russian slang word for a man is muzhik. In Tsarist Russia, a muzhik was used only for the lower classes. Now, however, that derogatory connotation has been lost. If a Russian woman describes a man as a real muzhik, she means he is a reliable tough guy, financially well-off, and capable in bed.

There are several slang words in Russian for promiscuous men, from macho (which was borrowed from Spanish via English, and has connotations of praise and respect) to the derogatory kobel (male dog).

Also, it is not uncommon in Russia to hear a man being called a kozel (male goat). A kozel is someone selfish, stupid, and prone to causing harm to other people because of his stupidity. Kozel is a grave insult in the criminal underworld.

Anyone called a kozel is honor-bound to exact retribution - hence the idiom "Za kozla otvetish” (You’ll pay for calling me a goat). Men who do not belong to the criminal underworld are often called frayer by thieves; the word is more of a contemptuous dismissal than a proper insult.

But vor (thief) is actually taken as a sign of respect by professional criminals. The leaders of Russian organized crime are customarily called vor v zakone (literally, a thief in law). Another slang word for a vor v zakone is avtoritet (literally, a reputable and authoritative figure).

Some of the previously very popular Russian slang words for men, such as kent, have long become obsolete. Others are still in use. For example, chuvak, a mutation of chelovek (human) that became popular back in the 1950s, is still widely used even by the younger generation.