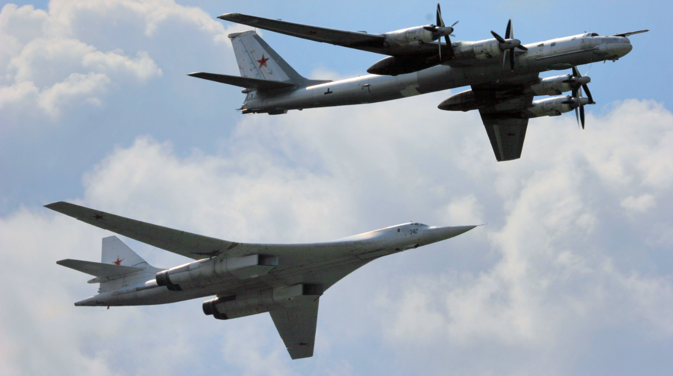 PAK-DA will replace Russia’s ageing fleet of 63 Tupolev Tu-95M Bear (above) and 13 Tu-160 Blackjack (below) strategic bombers in the next decade. Source: Itar-Tass

Both Russia and the US are going full throttle with the development of new long-range strike bombers, but drones are a cheaper and more futuristic option.

What do terrorists and air force generals have in common? The answer is both have recurring nightmares about drones. This is because these unmanned aerial vehicles threaten to put both groups out of business.

The irony is that despite the growing sophistication and endurance of drones – which are performing strike missions that were until recently the air force’s exclusive preserve – both Russia and the United States have green-lighted the development of long-range strike bombers. The new projects are not going to substantially improve Russian or American security but are guaranteed to leave gaping holes in their defence budgets.

The Russian Air Force has approved the development of a new strategic bomber known as the PAK-DA that will replace Russia’s ageing fleet of 63 Tupolev Tu-95M Bear and 13 Tu-160 Blackjack strategic bombers in the next decade.

Can the PAK DA outperform the B-2?

Remarkably, at a time when air to air missiles are going hypersonic (five-10 times the speed of sound) the new Russian bomber is being touted as subsonic. So when the PAK-DA enters service in the 2020s it will be replacing aircraft that were designed 50-70 years ago, and yet the new bomber will be slower than some of the retiring aircraft.

Secondly, the doctrine of strategic air strike remains unchanged. The subsonic Tu-95 and the Mach2 Tu-160 are designed to take off from bases deep in Russia and launch hundreds of nuclear armed Kh-102 cruise missiles from safe standoff distances – up to 3000 km away from American shores.

The new bomber, which is expected to burn billions in R&D cash, will perform the same role – that is, it will be yet another platform for launching cruise missiles. The only major improvement is it will have a stealth coating, the effectiveness of which hasn’t been conclusively proved against a worthy enemy.

And in the blue corner

American aerospace giants Boeing and Lockheed Martin declared in October 2013 they will cooperate on a new long-range strike bomber (LRSB) project for the US Air Force as the military seeks to replace its aging bomber fleet of 160 heavy bombers — 76 B-52 Stratofortresses, 63 B-1 Lancers, and 20 stealth B-2 Spirits. The US Air Force said the cost of each aircraft is estimated at $550 million and the total value of 100 planes would be $55 billion.

But wait, the prime contractor is Lockheed-Martin – the king of cost overruns. In 1996 when it bagged the contract, the projected cost of the aircraft was around $65 million, which has now ballooned to around $200 million per plane. The LRSB programme – which has already chewed through $300 million – is unlikely to buck the trend.

You’d think with the Soviet threat gone, the US Air Force doesn’t have a case for a new bomber. But the new mantra is if you don’t have an enemy, then invent one. Despite the fact that the Chinese military is puny by American standards, the US military is portraying the dragon as larger than life. The Pentagon’s view is that no Chinese naval ships can patrol without coming under the reach of land-based airpower. According to the US Air Force's Vice Chief of Staff Gen. Philip Breedlove, the US must continue to have the ability to strike any target on the globe from the air.

Long-range strike is a central capability in the American military’s new doctrine of AirSea Battle, which calls for closer integration between the US Air Force and US Marines in the battlefield.

Bombers in the crosshairs

“Many countries such as Iran and Syria have deployed integrated air defenses that combine highly sensitive radars with agile surface-to-air missiles,” he says. “These defenses have been designed to burn through interference generated by US jamming devices, and to track aircraft in multiple frequencies so that they cannot be easily deceived by countermeasures. That will make it difficult for US bombers to penetrate hostile air space in the future, especially if they lack advanced stealth features. The B-2 is the only truly stealth bomber in the fleet today, and even it is deficient in some wavelengths.”

Lumbering and expensive, the bomber is already in the crosshairs of anti-aircraft forces. The downing of the F-117 stealth fighter-bomber by Serbian ground forces using an antiquated Soviet missile system is a pointer to what motivated and educated combatants – unlike Saddam Hussein’s badly trained forces – are capable of achieving in the battlefield. With the newer S-300 and S-400 surface to air missiles, that threat has multiplied by several orders of magnitude.

Also, new radars under development, especially in Russia, are being designed to seek out stealth aircraft just as easily as non-stealth ones.

Day of the drone

It is a measure of how drones are reshaping modern warfare that America’s top guns are being reassigned to drone duty, leaving a huge shortfall of pilots in the US Air Force. The problem is so acute that the service is offering a $225,000 signing on bonus for new pilots – provided they stay in the air force for nine years.

The 21st century air force is facing an existential crisis as the increasing sophistication of drones and their endurance power – limited only by fuel supply – is changing the aerial equation in favour of unmanned aircraft. With air refuelling, airborne time will be limited only by the failure of subsystems.

Plus, their low cost and the fact that drones reduce pilot risk to zero should ideally make them the perfect replacement for expensive intercontinental bombers. The absence of a pilot translates into substantial cost savings not only in fuel but also because expensive life support systems are not needed.

According to Air Force Magazine, the drones vs piloted aircraft struggle “has little to do with technology and everything to do with politics”. This is because the world is still uncomfortable with the idea of an armed machine flying around without a human controller on board.

However, pilotless technology is not really new. Russia’s Buran space shuttle, which flew in November 1988, was completely automated. According to a report prepared by the All-Russian Research Institute of Aviation Materials, the most important difference from the American shuttle was that the Russian spaceship could perform the flight and landing in totally automatic mode.

More recently, the Boeing 777 is an example of an aircraft so automated that it could be said to have “optional pilots”.

Air force pilots may be glamorous and butch, but in the age of the drone the long-range bombers – and indeed other piloted aircraft – are living on borrowed time. If air forces – and their civilian bosses – accept that with humility, it could save both former superpowers a pile of cash.