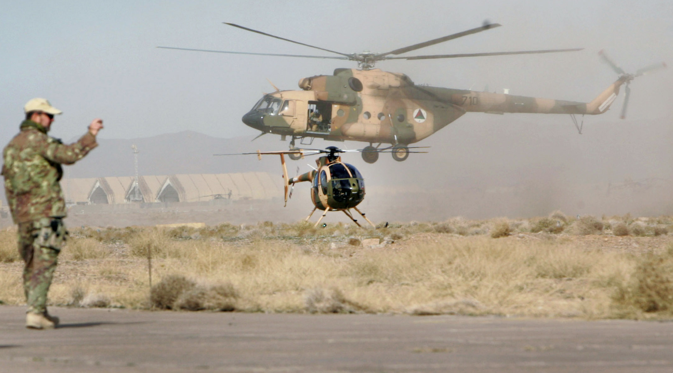 The US military’s decision to order 63 Mi-17 helicopters for Afghanistan was a tacit admission that when it comes to the crunch Russian weapons deliver. With politics killing the $1 billion deal, all bets are off the Afghan National Army defeating the Taliban.

For once the US military, which has suffered nearly 20,000 casualties in its longest war ever, had got something right in Afghanistan. The decision to arm the Afghan National Army with Russian helicopters instead of American ones was based on sound military logic – you fight with the best weapons you can. “One of the reasons the Afghans like the Russian helicopters is that Russian helicopters are a bit more forgiving in austere environments,” says Christopher Harmer, a retired US Navy helicopter pilot and a senior naval analyst with the Institute for the Study of War.

Translated, it means Russian helicopters are better suited for combat. For, if war isn’t an austere environment then what is?

But that deal now stands cancelled because of pressure from an unlikely alliance of right wing politicians and left wing human rights groups, which argue that the Russian firm, Rosoboronexport, which supplies the Mi-17, is also dispatching weapons to Syria. This alliance is not only running interference for terrorist groups in Syria, but by scuttling the helicopter deal it may have signed the Hamid Karzai regime’s death warrant.

Why the Afghans want them

Twenty-five years after the Soviet Army left the country, Russian helicopters are remembered – fondly or fearfully, depending on which side they were fighting for – by the Afghans. Russian helicopters had routed the US-Saudi Arabia-UK-Pakistan-China backed mujahideen before the arrival of the US-made Stinger surface-to-air missiles restored the balance.

Learning from their combat experiences in Afghanistan, the Russians had improved their helicopters to survive in that brutal war. According to Harmer, the Russians “know how to make their equipment robust”.

Defence industry consultant Loren Thompson of the Lexington Institute points to a key feature of Russian aircraft. “The main appeal of the Russian helicopters is the simplicity of their control,” he says.

But is simplicity something to be scoffed at? Well, in an era before Western corporate interests and journalism became bedfellows, here’s what TIME magazine wrote: “Russian weapons are generally simpler in design and more mobile. For too long the West believed that the Soviets made simple weapons because they were too unsophisticated to make complex ones. Now the West realises that the simplicity bespeaks a high state of engineering skill.”

What about US choppers?

The US military’s argument for procuring the Russian model is that American helos are far too advanced to be operated by Afghans who, the American say, have poor literacy levels. So the more basic Russian helicopters are suited for Afghan skill levels.

Well, not quite. The Taliban may be semi-literate, but the Afghans are not. During the 1980s, the Russians built up the Afghan Air Force (AAF) which had over 400 military aircraft, including more than 200 fighter jets, based mainly at Shindand on the Iranian border. Afghan air power propped up the pro-Russian government of Dr Najibullah, with the AAF pilots doing an ace job against the mujahideen.

In fact, new recruits to the AAF are now brought to the aircraft scrap heap at Shindand for a walk through history. According to the base commander, it is a reminder of “what a strong air force we had” before the base was destroyed.

So the argument that the US has been training ‘incompetent’ Afghans for a decade without much progress is a load of baloney.

Perhaps the argument that the Afghans are not capable of training on American aircraft is a cover-up. Besides being two to three times as expensive as the Russian ones, American military helicopters have suffered numerous blowouts in both Iraq and Afghanistan. The high altitudes of Afghanistan have played havoc with helicopter equipment. For instance, in June 2013 a hailstorm damaged more than 80 US military helicopters, wrecking rotor blades, shattering windows and grounding aircraft for weeks.

At the same time, the Taliban have taken a shine to US helicopters. They claim their militants have shot down several aircraft and NATO choppers in different parts of Afghanistan. According to a study by the Brookings Institution, while just 5 per cent of US deaths in Iraq have been caused by helicopter crashes, the total is 12 percent in Afghanistan.

The US military consistently denies Taliban action has anything to do with their continuing crashes, but that’s an understandable response – you don’t want to give the Taliban a leg-up on how effective their tactics and weapons are.

Russia vs US: Comparable choppers

The Mi-17V5 is the export model of the Mi-8 – the most produced (12,000) and exported (3000) helicopter in the world. The chopper can be used as both a transport and gunship helicopter. It not only has an auxiliary engine but also an extra door on the right side, improving survivability.

The Russian chopper is nearly twice the size and weight of the equivalent American model, the Bell UH-1, although it only hauls about 50 per cent more cargo. But the additional weight constitutes a thicker skin and overall more protection from small arms fire. Earlier this year a Syrian Air Force Mi-17 was hit by an air-to-air missile fired by a Turkish Air Force fighter aircraft but the helicopter survived long enough for both Syrian pilots to bail out in their own airspace and avoid capture.

According to Strategy Page, while the American military replaced the UH-1 with the UH-60 in the 1980s, the Russians “just kept adding better engines and electronics” to the Mi-17’s basic frame. And with the Russian aircraft costing about half as much as a UH-60, “if you want mobility for the least cost you get the Mi-17”.

In fact, the push for the Mi-17 came from the very top of the US military establishment. Asked why the US doesn’t supply the Afghans with American-made aircraft, US Joint Chiefs of Staff Chairman Gen. Martin Dempsey told Congress last summer: “There’s no way we can put them in anything other than that helicopter.”

Crunch time for the Afghans

Another factor is access. Afghanistan has few good roads and these are mined by the terrorists. Most of the country is reachable only via aircraft, and in Afghanistan where landings and takeoffs on runways is like playing Russian roulette with the insurgents, helicopters are the only safe mode of transport for ferrying soldiers and supplies.

With the US military now withdrawing to its city bases, the brunt of the fighting will now be done by the Afghan National Army. Considering this rag tag force is low on morale – with a 34 per cent desertion rate – air power is all that can stop the Taliban from kicking down the gates of Kabul. By cancelling the helicopter deal, the US political leadership has signalled how little it cares for its allies in Kabul.