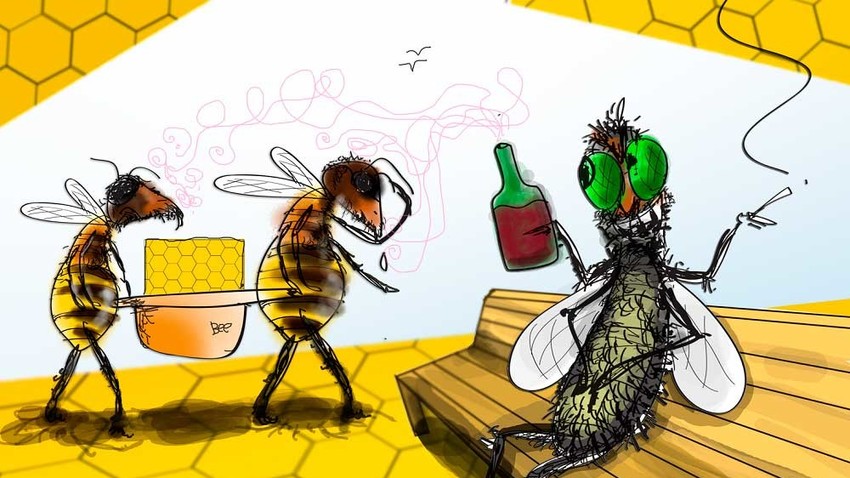 Niyaz Karim
People have always endowed animals with human traits: loyalty, industry, and arrogance. In the Russian language, this has generated numerous similes.

When a human being is compared to an animal, it is usually their less attractive qualities that are highlighted by the comparison. Out of all domestic cattle, it is only the bull that has a positive connotation: healthy as a bull, you could say of a man of robust health. At the same time, if a woman is compared to a cow, the only simile is fat as a cow.

When a person is compared to a ram (especially in the expression to stare at a new gate like a ram, meaning to look completely lost), the implication is that they are not very clever. When a woman is compared to a sheep, she is, well, sheepish and easily frightened.

Comparisons to fowl are not particularly flattering either: for an arrogant person, it could be said that they are puffed up like a  or are self-important like a goose. At the same time, goose can also mean indifference and imperviousness: in the Russian equivalent of the phrase “water off a duck's back,” the duck is replaced with a goose. The rooster is associated with aggressiveness, like in the phrase “combative as a rooster”; whereas the hen is for some reason associated with bad handwriting, hence the phrase “to write like a hen with its claw.”

Horses symbolize hard work, and it is often said of workaholics that they are plowing like a horse. Intriguingly, a technical word that is used to describe gray horses (сивый) forms part of expressions to “lie like a gray gelding,” meaning to say blatant lies, and “ravings of a gray mare,” meaning utter nonsense.

A comparison to a dog can be both negative (angry like a dog) and positive (loyal like a dog). When two members of a family do not get on very well, you could say, they are like a cat and dog together. A mouse is associated with poverty, hence the expression “poor as a church mouse.”

The main characters in Russian folk tales are the wolf, the fox, the hare and the bear. The traits they personify in those tales have given birth to the following expressions: hungry as a wolf; crafty like a fox; and cowardly like a hare. Interestingly, fare-dodgers on public transport are popularly known as hares.

As for the bear, who in real life is a dangerous predator, in Russian folk tales, he is usually represented as a clumsy but creature. A case in point is the mascot of the 1980 Moscow Olympic Games, Misha the bear. At the same time, a large and clumsy person is more likely to be compared to an elephant, as in the phrase “like an elephant in a china shop.”

Another creature of the animal world that is associated with industry and hard work is the ant, thanks to a classical fable by Ivan Krylov, in which it is juxtaposed with a careless dragonfly. Interestingly, the bee, whose could be quite dangerous for humans, has positive connotations as in the phrase “to work like a bee,” while quite harmless flies get a bad name, as in the phase “importunate like a fly.”

Comparisons to birds usually have positive connotations: to sing like a nightingale; slender like a swan; wise as an owl; quick as a sparrow; and proud as an eagle. At the same time, some birds are associated with negative traits: “fierce like a vulture” you could say of an aggressive and angry man; she is “prattling like a magpie” you could say of a particularly talkative woman; while a mother who does not take good care of her children is sometimes called a cuckoo.

A person who takes his or her time when doing anything is compared to a tortoise, while somebody who can run very fast is sometimes compared to a swift-footed deer.

The pike in Russian folklore is a magical fish that could fulfill your every wish, as in the "At the pike's request.” The crayfish is associated with retreating, although there is also another expression, drawing on the similarity in color, as a red-faced person could be said to be  as a crayfish. Together with the swan, these three creatures – thanks to another fable by Ivan Krylov, called "Swan, Crayfish Pike" – present a classical Russian symbol of disjointed action, each of them pulling in its own direction.