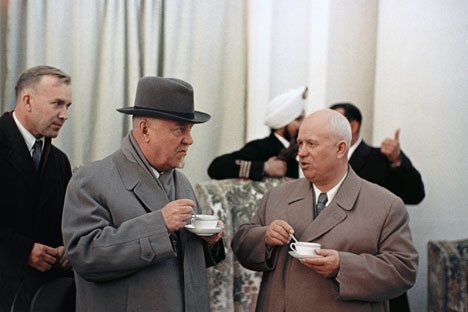 The visit of the top Soviet leaders left an indelible mark in the hearts of the residents of the Nilgiris in Tamil Nadu.

As a convoy of cars passed a newly asphalted road in 1955, V Raghavan, a 13-year old tried his best to get a glimpse of the important “sirs” from a tea garden. India had only been independent for 8 years and Raghavan who was a student of a missionary-built school in the peaceful hill town of Coonoor assumed the men in the car were British. “I saw Nikita Khrushchev and Nicholai Bulganin get off the car at the entrance of the Singara Tea Estate,” Raghavan says with a smile. “There were still some English families living in the town at that time and I thought they were some of the erstwhile rulers coming back,” says the former Tamil Nadu bureaucrat. “The next day, my teacher laughed at me and told me who the important people were… Honestly that was the first time I heard of Soviet Russia.”

In November 1955, Soviet Prime Minister Bulganin and Communist Party Secretary Khrushchev visited India, it was more a voyage for discovery for the duo. They travelled to Punjab, Bombay, Bangalore, Madras and Calcutta and also made it a point to visit smaller towns and villages. Many historians say this visit heralded a new era of friendship and cooperation between India and the Soviet Union.  It was their actions in the small towns that really made the duo legends.  In the village of Vadamadurai in Tamil Nadu, Bulganin is believed to have drunk some coconut water in a farm and the place is called ‘Bulganin Thottam’.

“They were only in the Nilgiris for a couple of days, but everyone became very curious about Russia after they came,” Raghavan says.  The Soviet entourage visited the Singara Tea Estate and had their first taste of tea produced at the estate.  Even now in the main house of the estate, there is a framed photograph of Bulganin drinking tea along with a member of the Madhvani family, which has business interests in Uganda and India.

The long visit to India of the two Soviet leaders also created special opportunities for some Indians. Raghavan spoke about how the excited the cooks were at the Ooty Raj Bhavan, the summer residence of the governor of Tamil Nadu, which hosted the Soviet delegation. “It was the first and last time in independent India that the place hosted such high foreign dignitaries,” Raghavan says.

Bulganin and Khrushchev also sought the services of the most famous barber in Ooty, N. Varadhan. “The great hair dresser was taken to the Raj Bhavan and asked to cut Bulganin and Khrushchev’s hair,” Raghavan says. “Can you name a single other instance when a barber cut the hair of foreign heads of state?”  A report about Varadhan in The Hindu in 2003 paid a rich tribute to the barber who died that year.  The report corroborates the story of the Soviet leaders getting their hair cut by the Ooty barber.  Varadhan cut the hair of 7 members of the Soviet delegation and was paid Rs 100, a fairly good sum in 1955.

The Nilgiri visit led to a deep interest in Russian literature as well, says Raghavan. “There was a lot of demand for Tamil translations of Chekhov’s and Pushkin’s works.”  Raghavan went on to study Russian when he moved to Madras to pursue a career as a civil servant. “Those leaders may never have known how much of an impact their trip had in the Nilgiris for more than a generation,” he says. “Even in the early 1980s, when the song Rasputin by Boney M became popular in Ooty, many people associated it with Khrushchev and Bulganin.

In this day and age when visits of foreign leaders last hardly more than 24 hours, it’s hard to believe that the Soviet duo put so much time and effort aside to reach out to India, both urban and rural. It was an exercise in international diplomacy at its finest and even had the West watching rather nervously. The visit had extensive coverage in magazines such as the New Yorker, which published a popular report titled ‘Bulganin, Khrushchev and the Lakhs.’  While talking about the garlands that were made for the delegation members, the announcer in a British video (available on the British Pathe website) documenting the visit “half the gardens in Delhi must have been emptied to provide all these flowers.” Reflecting the mood of those days, the announcer also said, “It is up to Britain to see that India’s admiration for us does not go by default.”

In smaller towns, a great awareness of the Soviet Union was created during the visit, but those in bigger Indian cities were more than ready to welcome Khrushchev and Bulganin. In Calcutta, the 2 million people turned up on the streets to great the Soviet leaders. Members of the security staff were so nervous about the prospects of a stampede that the duo had to be transferred from an open car to a police jail van.  Three decades later, the Los Angeles Times termed the “a watershed for the Soviet Union's relations with India and, in fact, with the rest of the developing world.” The paper said, “In the three decades since, the Soviet Union and India have formed one of the strongest, if oddest, partnerships between nations.”