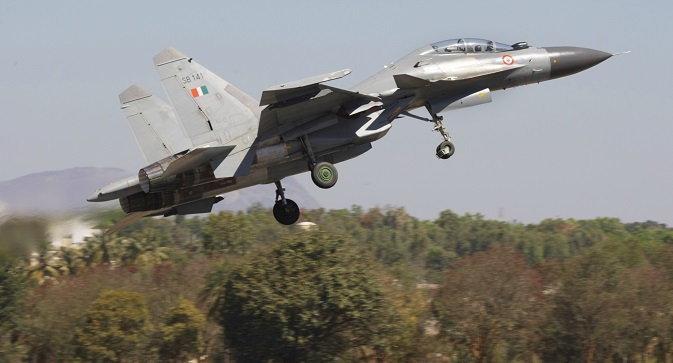 The versatile and constantly evolving nature of the Sukhoi enables the Indian Air Force to think big and strike far.

With the induction of large numbers of class leading Sukhoi-30 MKI fighters, the Indian Air Force (IAF) has not only made a huge technological transition from a MiG-21 dominated fleet, its war fighting doctrine has also changed, focusing on long-range and strategic missions.

Aggressiveness is a fundamental requirement of air combat, and the IAF has traditionally been an attack orientated force. For instance, on December 3, 1971 in response to Pakistan Air Force (PAF) raids on 11 Indian airbases, the IAF responded with initial air strikes the same night, which were expanded to massive retaliatory air strikes the next morning.

In previous wars, it didn’t matter if their opponents had better aircraft and radars, IAF pilots compensated for it with their superior training and ingenuity. IAF pilots truly internalised what Sergei Dolgushin, a Russian Air Force ace with 24 victories in WWII, said is a prerequisite to be a successful fighter pilot: “a love of hunting, a great desire to be the top dog”.

It was with the MiG-29 Fulcrum that the IAF for the very first time acquired a superior aircraft compared with those operated by the PAF. However, the qualitative edge was marginal. On the other hand the Sukhoi-30 MKI is an “air dominance fighter” that is allowing the IAF to perform a multiplicity of missions required to keep in step with India’s rising global stature. The Sukhoi’s versatility – owing to its extended range, speed, firepower and super-manoeuvrability – has given the IAF considerable leeway in deploying the aircraft in offensive missions.

In April 2013 the IAF held its largest-ever combat exercise involving as many as 400 combat aircraft plus 200 transport planes and helicopters. The exercise was aimed at testing the IAF’s capability for a two-front war against China and Pakistan, by deploying “swing forces” from the western theatre right across to the east.

As part of the war games, Sukhoi-30MKIs flew 1800 km bombing missions from Chabua in Assam to the western front, with mid-air refuelling. This is possible because the Sukhoi has a range of 4.5 hours on internal fuel, and IAF pilots are known to lead missions over 10 hours.

BrahMos and the mini air force

The Su-30 MKI has 12 hard points for missiles and bombs. The IAF is carrying out structural modifications on the Sukhois to enable them to carry the air launched variant of the BrahMos cruise missile. If the contracting firms are able to reduce the mass and weight of the missile, the aircraft would be able to carry up to three of these missiles.

In previous wars the IAF avoided attacks on non-military infrastructure, preferring to target tanker farms and military bases. The decision to equip the Sukhois with the BrahMos creates new synergies and signals a new intent. The Sukhoi’s radar can detect tall buildings at a distance of 400 km and small building at 120 km. The BrahMos is a highly destructive missile and belongs to a class of Russian missiles that are designed to cut small warships in half. So in the next war expect a lot of damage to enemy infrastructure – dams, power stations and industrial clusters are all likely to be targeted.

There is another ominous angle. India’s Strategic Forces Command (SFC) has asked for 40 nuclear capable strike aircraft to be used conjointly with land-based and submarine launched ballistic missiles. Although it’s not clear whether the IAF or the SFC will operate this mini air force, what is clear is that exactly 40 Su-30 MKIs have been converted to carry the BrahMos. That’s some coincidence.

A nuclear warhead on an air-launched BrahMos fired from a super-manoeuvrable Su-30 MKI won’t just further enhance the IAF’s strike capability and aircraft survivability, it would also complicate the enemy’s defence planning.

Such complex missions require powerful navigation systems. India has chosen to buy barebones Sukhois from Russia and then cram them with Israeli and French equipment. Plus, the already excellent Bars radar, which can track an aircraft at 125 km and a battle tank 40 km away, is being replaced with the Russian Zhuk active electronically scanned array (AESA) radars.

Another quantum leap the IAF is making is in beyond visual range (BVR) missiles for the Su-30 MKI. Complementing the Zhuk radar will be the Novator KS-172 air-air missile, with an estimated 300-400 km range and a speed of Mach 4. If Russia and India can bring this missile to production, the IAF will finally be capable of anti-AWACS and anti-satellites missions.

The Su-30 MKI has also given a fillip to the DRDO, which has designed and developed the aircraft’s electronic counter measures suite, including the radar warning receiver and frequency hopping radios and identify friend or foe system. Irkut President Alexy Fedorov says the Su-30 MKIs are being upgrade to the ‘Super Sukhoi’, which has features similar to a fifth generation aircraft.

It is a fact that quantity has a quality all its own. Including aircraft under order, India’s Sukhoi-30 MKI fleet is currently pegged at 272. It is an impressive number for such a high-end and expensive weapons platform. This shows a keen sense of judgement by the IAF, which realises that 100 per cent fleet utilisation is impossible and having a large number of air superiority aircraft around is the key to getting the job done.

With such numbers at its disposal, the IAF is now able to build a network of bases around the country. Earlier, because of the low range of its fighter aircraft and coupled with the fact that the IAF had to quickly deploy them in war, most Indian air bases – such as Adampur, Jammu, Amritsar and Jodhpur – were close to the Pakistan border.

But now Sukhois are also being stationed at places such as Thanjavur in the deep south, Chabua in the northeast and Pune in western India. Because of its long legs and speed the Sukhois can join battle at a few hours notice.

A worrying factor, however, is the planned force of 272 Sukhois falls well short of the 400 Sukhoi-30 equivalents and knockoffs in the Chinese air force. If the 126 French Rafales are inducted over the coming years, India should achieve at least quantitative parity with China. That is, until the Chinese stealth fighters arrive.