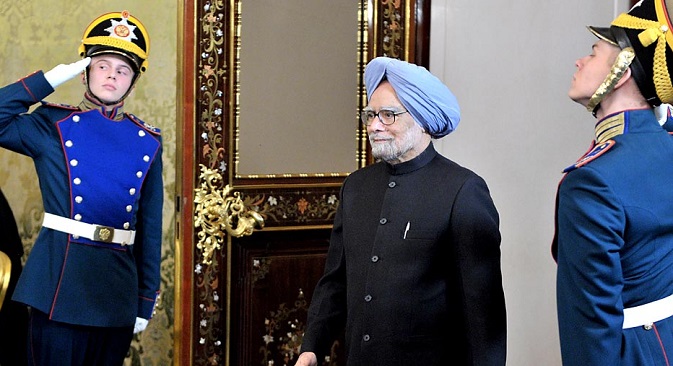 Manmohan Singh walks past Russian honour guards in the Kremlin in Moscow, on October 21, 2013, before a meeting with in President Vladimir Putin. Source: AFP/East News

As well as strong military ties and a shared world view, growing economic cooperation will be the focus of Russia-India engagement in the years ahead.

Chanakya, the Machiavellian advisor to Indian Emperor Chandragupta Maurya (340-298 BCE) wrote: “There is some self-interest behind every friendship. There is no friendship without self-interest.”

The Russia-India relationship was forged in the crucible of Cold War politics. The United States had clearly spelt out what it expected of India: “You are either with us or against us.” The West’s cold shoulder towards India and the Russia-China split – resulting from Beijing’s perception that Russia had betrayed communism by staying neutral during the 1962 India-China War – were the catalytic events that brought Moscow and New Delhi closer. This strategic relationship has lasted – despite the hiccup of the Boris Yeltsin years – for over 50 years now.

Unlike the patron-client relationship that has existed between, say, the US and Egypt, the US and Pakistan or even China and Pakistan, the Russia-India engagement springs from shared geopolitical interests.

According to Vyacheslav Trubnikov, First Deputy to the Foreign Minister of Russia and former ambassador to India, barring the odd foreign policy differences, “India is Russia’s only genuine strategic partner. We have never had any conflicts; neither do we have a common border. And the main principles of our two countries’ foreign policy are either identical or very close.”

The biggest factor that binds the two nations is the fact that there are hardly any areas where they are arrayed on opposite sides. Because India is perceived as a country that won’t stab Russia in the back (like Egypt and China have done in the past) Russia is able to offer New Delhi the crown jewels of its armaments industry.

The most visible symbol of this aspect is the joint production of the fifth generation stealth fighter PAK-FA, which is likely to enter production in 2017. Russia continues to offer help in other strategic areas such as nuclear powered submarines and hypersonic missiles.

Despite India’s massive diversification programme, it is likely to be dependent on Russians weapons for a long time. In a paper for the New Delhi-based institute for Defence Studies & Analysis (IDSA) Rod Thornton writes: “With its military spending being geared fundamentally towards dealing with the threat, however envisaged, from China, and with that country’s current immense military spending producing such a dynamic expansion in military capabilities, New Delhi simply cannot hope to keep pace with any policy of ‘going it alone’. It needs help. In India’s arms race with China, as one Indian analyst put it, the country is not so much racing as running as hard as she can to stay still.”

2013: A significant year for the India-Russia partnership

He adds: “The pressure to be an independent producer of a range of weapons systems – both low-tech and high-tech – has to be balanced by the pressure to field such systems quickly. The need is still there to take the shortcut and to procure from abroad. The obvious choice here would be the traditional supplier, Russia.”

Because India is now the world's biggest weapons buyer, Russia needs to avoid making the mistakes of the past. The cost overruns and delays associated with the INS Vikramaditya aircraft carrier are still fresh in public memory. But that wasn’t the only setback in bilateral defence ties. The construction of India’s own aircraft carrier INS Vikrant was delayed because Russia could not supply the necessary grade of steel. India then had to develop the steel locally.

Again, the INS Chakra, an Akula-II class nuclear attack submarine, was to be leased to India in 2008. But an accident caused by a negligent civilian contractor meant it was finally delivered last year.

Still, what cannot be overlooked is the fact that no other country provides India such red hot technologies without strings attached. So expect defence ties to stay in the fast lane.

The magnitude of Russia-India defence ties and their high visibility tends to overshadow the growing economic cooperation. A $2 billion India-Russia Joint Investment Fund will encourage direct investment and acquisition of assets in infrastructure, manufacturing and hydrocarbons.

Russia’s presence in India’s nuclear power sector offers a stark contrast to the comatose India-US civil nuclear deal signed in 2008. Now that the Kudankulam power plant has gone critical, Russia is keen to get the green light on other projects. Russia and India are also reportedly working on advanced thorium-based reactors, which produce more nuclear fuel than they consume.

A project to assess the feasibility of the Global Navigation Satellite System (GLONASS) in areas such as disaster management, telephony and long distance communications can pave the way for India to have a useful alternative to the US-controlled and less accurate Global Positioning System (GPS).

To be sure, it’s not all one-way traffic. The two countries have agreed to collaborate on manufacturing pharmaceuticals in Russia and will jointly develop software.

According to Russian President Vladimir Putin the two countries are aiming for $20 billion in trade by 2015.” Considering that India-US trade stands at $90 billion, that is a lot of room to cover.

There is another less well-known aspect of India-Russia bilateral engagement. According to the IDSA’s Rajorshi Roy, “Russia is an independent and powerful country, a member of the P5 and in many ways can be considered as a pole in international diplomacy. Moreover, it holds the key for India in different multilateral forums such as the Shanghai Cooperation Organisation (SCO) and in the effort to activate the International North South Transport Corridor (INSTC), which can solve the problems of ‘connectivity and accessibility’ with the Eurasian region.”

Until recently, with Russian backing India was able to maintain a squadron of MiG-29 fighters at the Farkhor air base in Tajikistan. The base allowed India to project power in Central Asia and also monitor the strategic Siachen Glacier.

Like they say, it pays to have friends in high places.