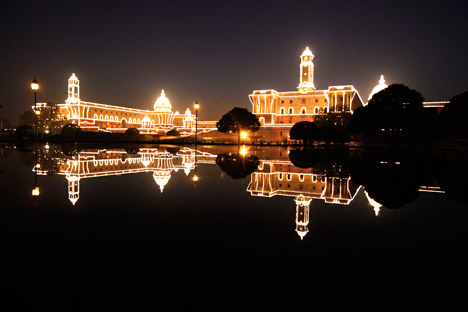 India steered its way creditably through a highly volatile period in the international system. Source: AP

Objectively speaking, India steered its way creditably through a highly volatile period in the international system and kept up good relations with all big powers in a foreign-policy matrix of diverse relationships at the bilateral and multilateral level.

India’s foreign policy record in 2013 has attracted much criticism in the domestic opinion. The criticism has been narrowly focused on the state of affairs in India’s ties with its neighbours and the alleged ‘drift’ in the relations with the US.

The opinion in the country at present is highly polarized as the 2014 parliamentary poll approaches. As far as the opposition is concerned, nothing that the government does can be good. Equally, 2013 proved a demoralizing year for those who view India’s foreign policy as the sum total of the country’s partnership with the US.

However, objectively speaking, India steered its way creditably through a highly volatile period in the international system and kept up good relations with all big powers in a foreign-policy matrix of diverse relationships at the bilateral and multilateral level. Much greater attention was paid to the relations with the neighbouring countries than before. Was it an optimal performance? Maybe not. Was it a ‘disastrous’ performance? By no means, no.

The single biggest diplomatic success has been that India did not get entangled in the rising tensions ensuing from the US’ rebalance strategy (or ‘pivot’) in the Asia-Pacific, which is at the epicentre of contemporary world politics or the winds of change sweeping through the Middle East. While remaining engaged more actively than ever before with Asia-Pacific, India created sufficient space to pursue an independent multi-vectored regional policy – it’s no mean diplomatic success.

India’s ties with Japan have finally come to a ‘take-off’ stage and the relations with Vietnam and South Korea show new dynamism. Yet, they wouldn’t entertain notions that India is in covert alliance to ‘contain’ China. On the other hand, Delhi has kept its conversation with Beijing going, and it gained new meaning with the signing of the accord on border management.

The Indian diplomacy focused on the South Asian region, which has been in transition. The most significant transition was in Pakistan. Interestingly, all the major political parties in Pakistan were agreed on the importance of fostering relations with India. This has been due to a shift in the Pakistani attitudes toward India in the recent years, due largely to Prime Minister Manmohan Singh’s commitment to dialogue and friendly relations.

Despite the eruption of tensions on the Line of Control, the two countries decided to resume the dialogue and the year ended on a positive note with Prime Minister Nawaz Sharif proposing to Delhi a road map for improvement of relations. Most important, 2013 witnessed a sharp drop – almost to a trickle – in the cross-border infiltration in Jammu & Kashmir, and there has been no major incident of terrorist acts masterminded from Pakistan.

The balance sheet would have been far better if only the opposition and the entrenched ‘hardline’ lobby in India, which reject give-and-take in relations with Pakistan, had not been so hostile to the government. 2013 turned out to be a chronicle of wasted time because there were ‘doable’ issues that could have been settled – Siachen, Sir Creek agreements, for example – and Manmohan Singh could have paid the long-awaited visit to Pakistan.

In comparison with Pakistan, Maldives is a small neighbour, but India’s ties with it are highly strategic. Unfortunately, former president Mohamed Nasheed thought it expedient to project himself as India’s favourite and Delhi was unwittingly dragged into the domestic political wrangle in the island. It took some patient effort for Delhi to disentangle itself but ultimately, Indian diplomacy successfully achieved this and Delhi could meaningfully engage the new leadership of Abdulla Yameen following the November election.

If Maldives has been a success story, the elections in Bhutan in July raised a scandal. Delhi apparently succeeded in paving the way for a new government in Thimpu. But then, People’s Democratic Party genuinely won its victory in the election. Any interference by Delhi in Bhutan’s domestic affairs is avoidable, as it could produce backlash and create an image of India as a regional bully. Bhutan as an independent country is entitled to diversify its external relations, including with China.

On the other hand, despite the acute polarization in the political landscape in Nepal and Bangladesh, India did not figure as a campaign issue. Indeed, a new level of maturity in India’s neighbourhood policies needs to be noted – a ‘hands-off’ approach and a readiness to engage the government in power. But an altogether new challenge has also arisen.

A tale of two elections

Thus, the equations with Colombo have come under stress due to the pressure on Delhi from Chennai. Again, the opposition from Kolkata to sign the border pact with Bangladesh blocked Delhi’s full-throttle attempt to reciprocate the goodwill shown by the Sheikh Hasina government. Critics interpret what happened as ‘weakness’ or ‘failure of leadership’ in Delhi. But the heart of the matter is that coalition politics in India is evolving, which engenders a new political reality and the country’s federal system has entered uncharted waters.

It is going to be virtually impossible for any future coalition government in Delhi to ride roughshod over the strong feelings of such big states as Tamil Nadu or West Bengal. The pundits have to climb down from the ivory tower and come to terms with this compelling reality.

The past year brought vividly to light that the approaches of India and the US significantly diverged in Afghanistan. Secondly, India’s capacity to influence the course of events in Afghanistan continued to remain marginal, whereas Pakistan’s centrality in any settlement became pronounced. Thirdly, no one can predict the nature of the power structure in Kabul in the post-Hamid Karzai era and a Taliban participation in some form is likely.

Given this calculus, Delhi has chosen a guarded policy to remain engaged without being sucked into a quagmire. Delhi wouldn’t want to be entrapped either in a zero sum game with Pakistan or end up identifying with any particular Afghan group. This approach to remain seriously engaged in the capacity building of Afghan state institutions and avoiding extravagant indulgences is judicious under the prevailing circumstances of great fluidity.

2013 turned out to be highly controversial for India’s partnership with the US. There is criticism that India’s relations with the US are in ‘drift’, while on the other hand, there is the Left laments that India has become the US’s ‘junior partner.’ Paradoxically, both strains of criticism essentially hinge on the 2008 US-India nuclear deal, which, the leadership in Delhi happens to cherish as its finest moment in foreign policy arena in the past decade in power.

Indeed, the nuclear deal has become an albatross for the US-India relations. The point is, expectations over the nuclear deal were unrealistically high on both sides. Despite its stubborn refusal to sign the Nuclear Non-Proliferation Treaty, India hoped to be recognized as a nuclear weapon power and admitted into the Nuclear Supply Group and other technology control regimes; gain access to advanced ENR technology; secure permanent membership of the United Nations Security Council – and all of this with a generous big push from Washington, the lone superpower on the planet. Of course, none of this happened.

The American side also fancied that tens of billions of dollars worth business would be generated in the Indian market for the US nuclear industry and, secondly, the US and India were all set to embark upon a “defining partnerships of the 21st century.” India’s nuclear liability law poses a near-insurmountable obstacle for the American companies to sell nuclear reactors to India, while Delhi and Washington do not see eye to eye on the most crucial foreign-policy concern for the Obama administration, namely, the US’ rebalance strategy in Asia.

A countervailing factor would have been the attractions of the Indian market for the US’ export industry, which is a priority in President Barack Obama’s foreign policy objectives. But here too, as the Indian economy slowed and with no significant ‘market reform’ expected in a near term, Washington lowered the priority attached to the relations with India.

Arguably, therefore, Indian ideologues of the Right and Left are both wrong in their reading of the state of play in the US-Indian relationship. If the relationship is in a state of drift, it is not because Delhi was inattentive or uninterested under what must be deemed an unabashedly ‘pro-American’ leadership. On the other hand, when the relationship is in such visible drift, the Left’s criticism that Delhi is a mere doormat for Washington’s global strategies lacks substance.

Suffice to say, objective realities are at work in the US-India ties. Since the 2009 financial crisis, US’ influence in the international arena began declining. Meanwhile, the US’ reading that India would settle for a role as its ‘junior partner’ was a hopelessly flawed judgment, since India rejects alliances and eschews ‘bloc mentality.’ In sum, 2013 has been a period of reality check in the India-US partnership. The illusions have withered away and a sense of realism may take hold. To qualify it as ‘drift’ in foreign policy won’t be doing justice to the enormity of what is happening.