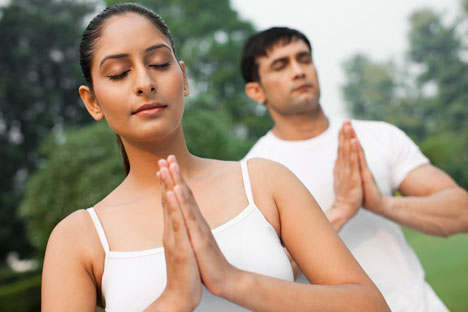 Not every Indian is into yoga and meditation. Source: Getty Images/Fotobank

The sheer distance between the countries and a lack of people-to-people contact has led the creation of a lot of stereotypes about Indians in the minds of Russians.

Despite the fact that an increasing number of Russians and Indians are visiting each other’s countries, the common person in both countries still lacks adequate knowledge of customs, traditions and the general culture and the people of the other country. Russians have long been fascinated by India, a country, which has always been looked upon as exotic, colourful and exciting, but sometimes have funny ideas about Indians. Here are the most common stereotypes about Indians in Russia.

1. Everyone mediates and is a yoga expert

India is obviously known for its spirituality, and being the birthplace of yoga and philosophies that emphasise meditation like Buddhism has made many a Russian think that being an Indian equals being some sort of spiritual person who can perform all sorts of yogic asanas. I can never forget my first ever yoga class in Russia when there were more eyes on me than on the instructor. It was doubly embarrassing since my yoga skills were never something I could be proud of, let alone qualify me to teach others.

2. All Indians are vegetarians

How your nationality matters…

I am not ashamed of being a meat-lover and I enjoy my shashliks as much as any Russian does and yes, my agnostic beliefs forbid me from considering any animal holy or unclean. Imagine my horror after accepting a (post-winter hike) dinner invitation only to find out that my considerate host went out of her way to cook a completely vegetarian meal! I was looking forward to being a complete carnivore after struggling through the cold winter trek in the mountains and there was an array of potato dishes and salads.

Many of my Russian friends were genuinely shocked to know that it is possible to be a vegetarian and a Hindu. Well, the Rajputs didn’t become such a strong and tough lot by making lentils their main source of protein.

Why is it so hard to believe that there are a large number of people from Bombay, the home of Bollywood, who just don’t like the traditional three-hour long musical Indian films? Hindi films are definitely not as popular in Russia as they were in the Soviet days but then there are those who swear by them. I hate to break the hearts of some of these people by telling them that I am not a fan of most Hindi films. What happened to judging each film based on its merits?  I would apply the same yardstick to Russian or Hollywood movies for that matter.

4. Indians are by and large followers of Gandhi

Although the recent press coverage about gang rapes have made many rethink about how they view India, most people in Russia still associate the country with Mahatma Gandhi. “You must have a photo of Gandhi in your house?” – There is no way I can possibly describe the expression of shock on the face of the person who asked me that question when I responded in the negative.

Other Russian friends of mine who were impressed with Richard Attenborough’s film on the non-violent freedom fighter expressed dismay when they interacted with urban Indians who didn’t have nice things to say about Gandhiji. “In one month in Bangalore, I heard more bad things about Gandhi than I heard in 40 years in my life in Moscow and Berlin,” a Russian journalist and close friend of mine said after a business trip to India’s information technology capital.

India may not have the gun culture of the United States or have to deal with drunken hooliganism on the streets like some countries in Eastern Europe, but it can hardly be classified as a society of non-violent Gandhians. Perhaps the fact that such a stereotype exists may be a testament to how good Indian diplomacy has been in Russia all these years.

I am willing to admit that many relatives and friends of mine are practitioners of the Indian head shake, but it is not as common as Russians (or any foreigners) make it out to be. It’s rather irritating to get the head shake from Russians who have been to southern India and think that this is some form of endearment.

Some Russian spouses of Indians have also managed to pick up this habit and have made it a normal part of their communication repertoire. Of course, I am more than willing to excuse these people who have formed a habit of doing the head shake than those who want to show it as some form of affection.

Note: I didn’t write anything about cows on the streets of big cities, since that is too common an occurrence to be titled a stereotype.