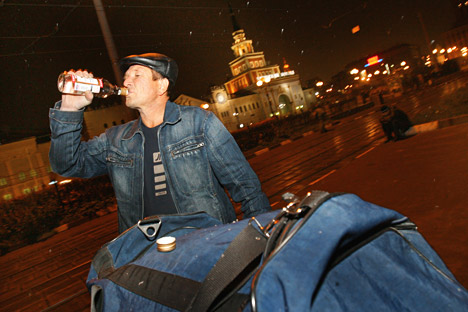 For many, vodka is no longer the beverage of choice. Source: RIA Novosti

In the second part of this series, Ajay Kamalakaran looks at the stereotypes that Indians harbour when it comes to Russians.

Russians don’t nearly travel as much as they should to places in India other than Goa and the Golden Triangle. Unfortunately this has led to many Indians forming their impressions about Russians based on what they see in Hollywood films and western news outlets, most of which don’t tend to be objective when it comes to Russia. In addition to this, many of the older generation in India have ideas that go back even to the Brezhnev era. Here are some of the most common stereotypes of Russians in India.

Some Indians innocently believe that in this age of indoor heating that Russians still need to drink vodka to stay warm and survive the winters.  Then there are those who think that the alcoholic beverage is such an addiction that the common Russian drinks it like water.

VIDEO: Vodka spoils everything but the glasses

Eleven years of living in and out of Russia has helped me interact with a cross-section of society and I can safely say that a large number of people in the country find the taste of vodka repugnant. I have one set of friends that prefers cognac, wine or good quality beers and (surprise!) another set that just doesn’t consume alcohol, given its harmful side effects. At a recent get-together, a Russian friend of mine shocked a few Indians by saying he doesn’t drink. “You may get some pleasure out of consuming alcohol, I don’t,” he said, to shocked expressions.

2. The land of giants and homogenous people

There is some kind of misconception that every man in Russia is 6 foot three inches tall.  My best friend here at RIR stands at a towering 6 foot 8 inches but he really does stand out and can be spotted from miles away on the streets of Moscow. Try telling the Indians I know that people come in all shapes and sizes in Russia.  Maybe a walk around one of the Lenin squares in many of Russia’s smaller cities would convince people of this reality.

A large number of Indians also believe that all Russians are ethnic Slavs and the country is homogenous. This is exactly why when my Buryat (an ethnically Mongol race from an internal Russian republic) friends visit India, people ask them which former Soviet republic they’re from.  Ethnic Russians (read Slavs) form around 80 percent of the population of the country but there are a total of 185 ethnic groups in Russia, making it one of the most multi-cultural countries on earth.

The credit for this stereotype goes completely to Hollywood. I’ve lost count of the number of American films that show Russian mobsters and Mafiosi.  There are still enough people in India who think they can get hurt in crossfire in a Russian city. My response is rather simple. “You have a far greater chance of getting shot in South Bombay in an encounter between the underworld and the police than you do in a Russian city.”

Since bilateral trade is witnessing a slow and steady growth, more Indian businessmen visit Russia and realise that the mafia does not have some kind of stranglehold on small and medium-sized businesses and this is just a myth in 2014.

This is by far the most cringe-worthy of all stereotypes about Russians. I can understand that the older generation of left-leaning Indians who grew up loving the USSR just refuse to accept that the socialist paradise doesn’t exist anymore and are so intent on believing that Russians will always be communists.

The younger lot, especially those who were born after 1991, are misled by some members of the academic community in India. At a conference in December in Mumbai, which discussed the 20th anniversary of the constitutional crisis, university students privately complained to one of RIR’s reporters that all they hear about Russia from their teachers is how wonderful a country the Soviet Union was.

There are also some Westward-leaning Indians who would love to propagate the myth that Russians are communists at heart, even if the country ditched communism two decades ago.

Many Indians who accept dinner invitations from Russia families are shocked to see that their hosts’ homes aren’t full of the famous nesting dolls. Matryoshka dolls have become one of the symbols of Russia and many Indians almost expect to be gifted their own set when someone comes from the country.

To be honest, these dolls are cliché and represent the ‘touristy’ side of Russia more than the reality. I have never seen a set of nesting dolls in a showcase in any Russian home, but I do know of people who give them to children as toys.

Note: From my own experiences, any stereotype about the generosity of Russian hosts is very often likely to be true. The same can be said about hospitality in India, where families take the Sanskrit verse Atiti Devo Bhavah (the guest is God) very seriously.