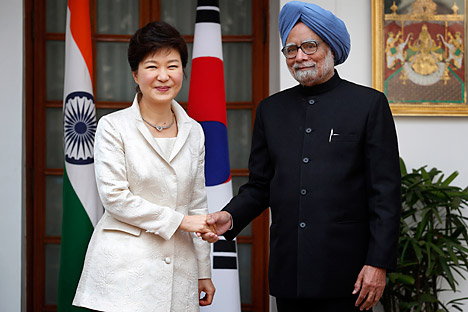 Despite the change of government following the parliamentary poll in April, India’s foreign-policy course will broadly remain the same.

The New Year has begun with India having major engagements with two countries in the Asia-Pacific – South Korea and Japan. It underscores that Asia-Pacific is where Indian diplomacy hopes to marshal its gravitas. A central factor here is China.

Having said that, India’s immediate neighborhood of South Asia poses the high risk of entrapping Delhi’s diplomatic energies very substantially through the coming 12-month period. China, again, figures as a relevant factor. Fortunately, the US-Iranian engagement in direct talks has dispelled the war clouds hanging over the Persian Gulf, a region where India is a stakeholder.

Despite the change of government following the parliamentary poll in April, India’s foreign-policy course will broadly remain the same –in the importance attached to the relations with the United States; the steady expansion of strategic partnership with Russia; good relations with the European powers; the emphasis on the highly rewarding ties with the Persian Gulf countries; and the incremental advancement of the ‘Look East’ policy. However, India’s capacity to leverage the market for galvanizing its diplomacy will be hamstrung, given the low prospects of growth.

The latter point is important because in comparison, China is clearly set on a course to accelerate its reform and increase the pace of economic liberalization with more market-based initiatives. In all probability, 2014 could be the year that China slouches toward the US-backed Trans-Pacific Partnership [TPP] agreement. China may seek out the TTP to promote change at home just as it used the WTO membership in the late 1990s to push through economic and institutional changes. The Chinese analysts estimate that the TTP sets a competition standard for the domestic reform in China. Where India lags behind, in comparison, is its continued inability to correlate the rapidly changing regional trade landscape with its domestic reforms.

The Indian pundits are missing the plot when they keep their eyes trained excessively on the military content of the US’ ‘pivot’ to Asia and the emergent power dynamic in Asia-Pacific. Asia – China, in particular – has become one of the main factors of the American economy’s growth story and is a key pillar to its recovery. This trend will only grow in 2014, as also China’s lead role as the trade partner for many Asian countries, virtually powering the region’s $20-trillion-plus regional economy. The US’s rebalance strategy aims at creating hedge against China’s growing strategic weight while at the same time benefiting out of China’s economy, which is a unique demand driver today powering the export-led sectors of the American economy.

Thus, while India’s ‘pivot’ to Japan could be seen in the light of the intensifying strategic wariness between Tokyo and Beijing, Delhi ought to be interested in the range of the Japanese tool kit – project finance, trade – and not merely security cooperation. 2014 will throw light on Japan’s approach to investment – whether there is going to be a serious rethink in Tokyo on China as an investment destination. To be sure, if tensions escalate in the Sino-Japanese relations, Japanese investments may begin to flow out of China to other Asian destinations. At any rate, does India present itself as an attractive destination for the Japanese businessmen? That remains the key question.

The heart of the matter is that the 2014 poll in India is unlikely to yield a scenario that is conducive to taking initiatives that can even vaguely invite comparison with China’s awesome economic reform agenda, which is sweeping in nature and includes commitments to financial liberalization.

The main challenges for the Indian diplomacy during the coming one-year period lie in crafting its neighborhood policies. Generally speaking, India’s relations with its neighbors are undergoing a radical transformation and a new requirement has arisen for Delhi to negotiate with the South Asian capitals in a way that it has not felt the need before. For the first time, Sri Lanka refuses to unilaterally release the Indian fishermen in its custody. Maldives plainly shut the door on the Indian company that used to run the international airport in its capital – notwithstanding Delhi’s demarche.

The Indian pundits express agitation that Delhi is ‘weak’ and is being pushed around by the neighboring countries, but they do not realize that the problem lies elsewhere insofar as there is a paradigm shift and there is need to develop new thinking and innovative responses. There is hardly any scope for muscle flexing or gunboat diplomacy in modern-day politics. Even a superpower like the US realizes as much in its Latin American backyard. The main lacuna in India’s South Asian policies is that it often takes the form of a desperate (and increasingly futile) quest for ‘influence.’

In plain terms, this means vying with China (or Pakistan) for primacy, which has narrowed down to seeking tactical advantages. But influence comes with willingness to engage deeply and over time, and the ability to integrate these economies, which involves sustained dialogue with the political elites and creating ‘win-win’ situations. What Russia is doing in Ukraine is a case study. India also needs a ‘Eurasian Union’ project for South Asia.

Without doubt, 2014 is a landmark year for the Afghanistan-Pakistan problem as the western troops pull out. Much will depend on how the present government in Delhi proposes to hand over the baton to the successor regime. Indeed, if Prime Minister Manmohan Singh does undertake the visit long-awaited visit to Pakistan (which cannot be ruled out), the new government in Delhi would have a ‘flying start’. Otherwise, the dialogue process would be at a standstill, even if temporarily, until the new government settles down in Delhi. Which, of course, is undesirable at a juncture when the power dynamic in the region is evolving. In the Afghan situation, there are variables and much depends on the transition in April taking place as scheduled in Kabul.

A tale of two elections

The Indian establishment seems to derive satisfaction that ‘friendly’ governments are in power in Nepal and Bangladesh. But politics in both these countries are heading for uncertainties. The 3-way power-sharing wrangle in Nepal between the Nepali Congress, Communist Party and Maoists already underscores that the political class learned nothing from past mistakes. To be sure, the drafting of a new constitution will prove extremely difficult. The constitution drafting and government formation should not be linked but the two processes continue to remain entangled. And here, Delhi’s approach, unfortunately, is largely security-driven (with an eye on China) and Nepal’s political stability takes a back seat in priority. Arguably, Delhi seems happiest if the present caretaker government remains in power in Kathmandu.

Again, in Bangladesh, the tactical advantage may appear to lie at the moment with the Sheikh Hasina government. But this is a superficial view, since there is a multi-dimensional crisis in Bangladesh, which is aggravated by the involvement of foreign powers – not only Pakistan and the US and its European allies but also the petrodollar oligarchies of the Persian Gulf. Without doubt, the trial and punishment of the war criminals as well as the crackdown on the Jamaat and its sources of funding from aboard are of importance for the country’s security and stability and they should be followed through, but at the same time, the opposition leader Khaleda Zia’s support base is unquestionable and the exclusion of her party, the Bangladesh Nationalist Party [BNP], is untenable. The BNP polled well over 50 percent of votes in the local body elections.

The two main parties, led by Hasina and Zia respectively, ought to come to an understanding in the interests of the long-term stability of the country and Delhi has a major role to play here. The US is fishing in the troubled waters to extract advantages, which would have implications for India. 2014 is going to be a do-or-die year for the future of democracy in Bangladesh and its ramifications for regional security (and India’s vital interests) cannot be understated.

The mood is bullish in Colombo

Sri Lanka poses an entirely different challenge to Indian diplomacy. The high probability is that India will again take a stance at the UN Human Rights Council meeting in March on alleged Sri Lankan war crimes, which will be resented in Colombo. But, more important, the new government in Delhi after the 2014 poll will come under unprecedented pressure to heed the public sentiments in the southern state of Tamil Nadu on the Sri Lankan Tamil problem. On the other hand, Sri Lanka is also heading for local body and, possibly, mid-term parliamentary polls, and in the surcharged political atmosphere Sinhala nationalism will ride high. All in all, therefore, 2014 threatens to be a rocky year for India-Sri Lanka relations.

In meeting these foreign-policy challenges, the ‘known unknown’ is going to be the outcome of the 2014 parliamentary poll in April and the power calculus that emerges in Delhi. India’s coalition politics is entering unchartered waters. So is the federal set-up in the country, which is already impacting neighborhood policies. Besides, the new team presiding over the foreign and security policy establishment will need time to take fresh stock of the diplomatic options open to it. In sum, 2014 is going to be a challenging year for Indian diplomacy.