Finding myself in the Moscow Circus 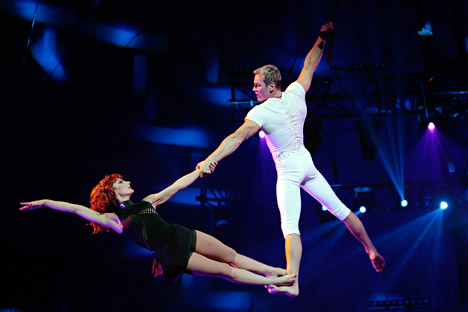 When times got hard for me, I turned to the best healing agent I could find: The Russian circus.

When I’m lost in life, I always go back to the Moscow Circus. It’s a funny thing.

I can spend months trying to figure out what’s wrong with my life, why I can’t think straight or why I am driving myself nuts. I can go in circles trying to deal with the intricacies of daily living. Then suddenly, I remember that when I don’t know what to do, I can always find myself in the world of the Russian circus, even if it’s sitting at home, watching a circus video that I’ve seen dozens of times.

I believe that everyone has to have a place to escape to when nothing seems to be going right. Since my dad suddenly died in December, and I lost my job at the same time, I came apart. I turned to counselors, to doctors, to pills (American doctors love their pills), even to American friends and family who all tried hard to glue me back together, to assure me that life goes on, new jobs are found, and that new memories are made after our parents are gone. Nothing seemed to work.

I started losing everything from my purse (ok, laugh at this!). Most of all my iPhones, which all seemed to disappear here and there. Suddenly no one could get a hold me to talk. Something was deeply wrong.

It’s human to grieve after a big loss.  But after all the western style of comfort didn’t seem to work, I found myself, Russian style, turning to humor as a way to cope.

I threw my pills away that were supposed to calm me down. I stopped buying new shoes — another habit to calm my nerves — and I sent my last check off to the doctor. I picked up my favorite Russian circus film, “Tsirk,” starring Lubov Orlova and James Patterson. The black and white film was made in 1936. It is still highly popular in Russia today.

For the hundredth time, for free, I was able to enjoy life again and to realize that there is triumph after tragedy, lightness after dark, and that life always seems to go on again, even when we think it can’t.

The film “Tsirk” is about an American woman who has a mulatto baby and is shunned from racist America. She suddenly finds herself across the world in the Soviet circus, where she (like me), finds acceptance and love, kinship and a sense of belonging in a community that she never dreamed of. It’s funny as hell.

I have watched this award-winning film so many times, imagining myself as the American heroine who falls in love with her Russian circus star, surrounded by a world that not only welcomes her and her baby, but shows her a different way of living, one full of craziness, of laughter, of monkey’s and bears, and families of a different kind.

For the Russian circus is, above everything else, a family. Generations of families. It’s always been a family to me, always a place I can go to, whether it’s to celebrate a birthday or to cry on a shoulder when a loved one dies.

To others it’s perhaps a weird place, simply a bunch of costumes and makeup, and actors running across a stage or throwing tricks in the air off a trapeze, but to me it’s always been family. I don’t find it odd that I had to fly 11 hours on an airplane 25 years ago to find them. I considered myself lucky that I found them at all.

As the world prepares for the opening of the Sochi Olympics in a few weeks, another Olympics has already started in Monte Carlo. It’s the annual competition for invited circus acts all vying for first place in their own categories.

The winners are declared the best circus acts in the world, just like in the world of athletics. The competition is just as stiff as the one in sports, and everyone in the international circus world this week is watching.

One woman — Melvina Abakarova — and her husband are competing this week. They are aerialists, a duo act that is beyond belief. I am rooting for them, not just because they are a stunning act with unbelievable tricks, but because I have known Melvina and her high wire-walking family for 25 years. They have always welcomed me as one of their own.

So it’s time to get my own act together, to find sunshine in the rain, to watch my favorite circus film and to try to find Melvina and her husband performing on the Internet. And as they say in Russian, everything will be all right.

James Patterson lives in my neighborhood, in Washington D.C. He's not a baby any more, but with him around, I know I'm in the right place.