Education
Alexey Mikheev
special to RBTH
There is a popular belief that a person's name can influence their destiny. What names do Russian parents choose for their children, and how can a name be used to express one's attitude to a person? 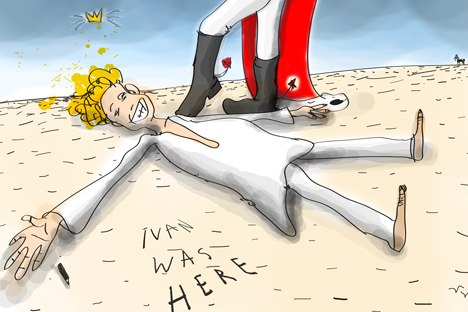 From a foreigner's point of view, the most "Russian" male name is Ivan. For many centuries this name was popular among all social strata, from ordinary peasants to the royal family (a case in point is the famous Ivan the Terrible). At the same time, it was the name's ubiquity that in the end compromised its reputation somewhat.

For instance, the main character in countless folk tales, the youngest and most hapless son in the family is usually called Ivanushka-durachok, a diminutive of Ivan-durak, meaning Ivan the fool. Having said that, he appears a fool only at the start of the tale, while in the end he always emerges victorious.

In the 20th century the name Ivan lost its popularity and began to be associated primarily with a person of poor education, limited intellectual ambitions and sloth-like habits (hence the expression "valyat' van'ku", meaning – among other things - to be idle). However, closer to the end of the Soviet period, it became fashionable among the intelligentsia and the creative classes to choose for their children old-fashioned names that used to be popular among the common people. That is why there are quite a few Ivans among the current generation of 30-somethings (take for instance, Russia's most popular TV host, Ivan Urgant). And vice versa, names that used to be considered aristocratic or foreign (like Robert, Albert, Eduard, Elvira, Kristina) today remain popular only in the provinces or among the nouveau riche, while the educated classes dismiss them as tacky.

According to official records, from 2012 to 2013 the most popular names in Russia were: for boys - Alexander, Maxim, Dmitry, Artem, Nikita, and Ivan; and for girls - Anastasia, Maria, Darya, Sofia, Elizaveta, and Anna. Interestingly, previously the list of most popular girls' names used to feature Vera, Nadezhda and Lyubov (which in Russian mean faith, hope and love), but not any more.

Most Russian names (with a rare exception, like Maxim, Nikita, Vera, or Nina) have a diminutive. As a rule, it is formed by adding the ending –sha to the initial syllable of a name, e.g. Mikhail becomes Misha, Pavel – Pasha, Maria – Masha, Darya – Dasha and so on. There are other models for producing diminutives too, for instance Pyotr becomes Petya, Lyubov is Lyuba, Nadezhda is Nadya. Sometimes to produce a diminutive, it is not the ending but the beginning of the full name that is dropped (e.g. Ivan becomes Vanya) or both, with only the middle bit remaining (e.g. Alexander becomes Sasha). Sometimes these different mechanisms produce two diminutives for the same name (e.g. Dmitry can be shortened to Dima or Mitya). For some popular names, the diminutives are further transformed to produce even more informal versions of the same name: in the chain Alexander – Sasha - Sashura – Shura, the final names seems to have nothing in common with the original and yet every Russian speaker knows that Shura is a diminutive of Alexander.

Oligarch, budgetnik, lokh: Russian slang for the rich and the poor

Full names are used in official papers and in formal communication, while at home and among friends Russians are usually known under their diminutives. To express even closer relations and affection, pet names are used, which are usually formed by adding a particular suffix to the diminutive, e.g. Vanya becomes Vanechka, Sasha -Sashenka, Masha - Mashenka, and so on. These names are used affectionately, by parents in relation to their children or by people who are in love. However, if a shortened version of the same suffixes is used (e.g. Vanka, Sashka, Mashka), the result is a very informal name, bordering on vulgar.

During the first years after the Bolshevik Revolution, the Communist authorities actively promoted new names that reflected the arrival of a new era. Usually, they were formed by abbreviating the names of the leaders of the revolution (e.g. Vilen was formed on the basis of Vladimir Ilyich Lenin, or Melor, which was formed from Marx, Engels, Lenin, and October Revolution; or a girl's name Ninel, which was Lenin read backwards). Perhaps the most bizarre of those new formations was the female name Dazdraperma, an abbreviation of the Russian phrase for “long live May Day.” There were also some rather strange sounding names inspired by advances in science and technology, e.g. Elektron or Industri, while the female name Domna, which in Russian means a blast furnace, turned out to be an ancient Roman name.

Some curious things emerge around foreign names. Some of them stop being proper names and turn into common nouns. For example, in the West all Russians are known as Ivans, while in Russia all Germans become Fritzes, just as in Turkey all Russian women are called Natashas. The diminutive of the Russian name Tatiana is Tanya, which in Polish means cheap. While the current American president's first name means a hut in Russian.

Speaking of presidents, the old Russian name Vladimir is formed from two words and literally means "one who rules the world." It has several diminutives: Volodya, Vova (which is a bit too familiar) and Vovochka (which is closely associated with a long-running series of jokes featuring a naughty schoolboy). Whereas the full name Vladimir Vladimirovich reminds many Russians of a famous early 20th century poet, Mayakovsky.