London-bound: A way paved in gemstones 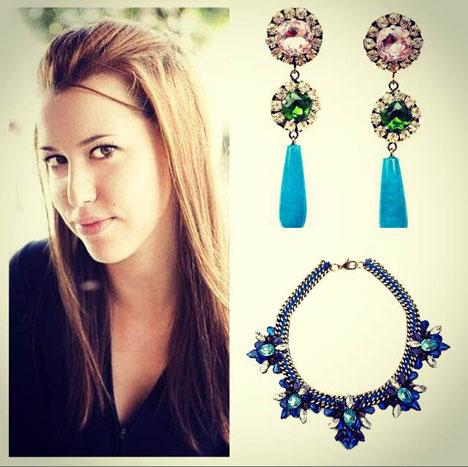 Natalia Osminova, a graduate of a prestigious gemology school, talks about her business and life in London.

Childhood in one of the richest cities in Russia: I was born in Nizhnevartovsk, a city in the Far North known for its oil and gas deposits. My parents, like most people in this young city, moved there for work reasons. The first thing that comes to mind when I think about my hometown is the long, virtually infinite, cold winter. It might be surprising, but in such a harsh climate people can be incredibly friendly, open and creative. At school we would often stage theatrical performances.

As a child, I did not like labels. When I was 14, I came close to shaving my head completely bald. I was fascinated by piercings. Teachers, to put it mildly, did not like it very much, but my parents did not interfere with my process of teenage self-expression.

Her first trip to London: The only thing my parents did not support me with was my decision to move to Moscow immediately after graduation. They insisted that I should go to university in Nizhny Novgorod, where my older sister had already moved.

After my first year there, I went to London to improve my English. I fell in love with the city at first sight. As soon as I set foot in London, I realized that was the place where I wanted to live. When I announced it to my parents, they just asked me to graduate from university first. Funnily, the place I wanted to move to when I was 17 - Moscow  - became the compromise solution in our conflict of interests.

Stopover in Moscow: I entered my third year of university moving to the Russian International Academy of Tourism and started living in Moscow. I discovered a city full of friends and acquaintances - someone from Nizhnevartovsk, someone from Nizhny Novgorod, someone met whilst travelling. During my time in Moscow I lived in a communalka (a communal flat) on Chistiye Prudy. Meanwhile, one of my old dreams came true: I started a fairly successful modeling career. I took part in various fashion weeks, worked with Russian designers and even managed to appear on the cover of several magazines. But the lifespan of a modeling career is very short, and I had other plans.

Life in London: Immediately after graduation, I went back to London for another English course. But I knew it was time to move on to the next level and started preparing for an MBA programme, working as a consultant at the department store Selfridges at the same time. The program was intense - I didn’t even have a chance to reflect on whether I was in the right place and if I had made the right choice.

One of the most important decisions of her life: Ever since I was a child, gemstones were my passion; but I did not think that this passion could turn into a profession until I learned about a representative of the Gemological Institute of America (GIA) in London. GIA is the most authoritative educational institution in the precious stones market. One look at their curriculum was enough to understand that was my calling. We studied stones under the microscope for days and described them in great details.

Not surprisingly, graduates from the institute are in high demand on the market. I received a prestigious offer from a Belgian company almost immediately. But it fell through when I failed to get a working visa. Of course, I was upset, but I didn’t want to waste my time. Enlisting the support of my parents, I decided to start my own business.

On her own jewelry brand: So this is how I opened my online shop Treasure Jewellery. I arranged everything on my own: I registered a company, found an accountant, suppliers. It turned out that London is a very comfortable environment for small businesses. Of course, initially I made some mistakes: in price segment, assortment and promotion. A year later, I realized that it was ready to launch my own jewelry line. Working in a competitive environment, that was the only way to find my audience.

At the moment my brand focuses on the creation of those products that can lead me to commercial success. All sketches of the first collection are "about me," but I always keep in mind the tastes of the buyers. I still have many ideas to realise, but I'm sure I will have the opportunity to fulfil my design ambitions.

On going back to Russia: During my seven years in London I have thought about going back. I miss my family, Russian food, the snow, speaking in my native language. There is something sobering about life in Russia. Every time I am back there, I instantly gain focus and understand how and what I need to do. In Britain, the environment is much more relaxed. In Russia there is a rhythm that you need to adjust to. Here in London everything is calmer. On the one hand, I like it; on the other, I struggle - I want to do more, move faster!