India adrift but not rudderless 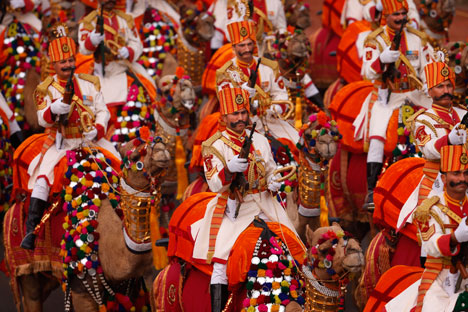 The failure of the political system is largely to be attributed to the political class and it is not as if India as a nation is failing.

There has been more than one occasion in its difficult post-independent history when India’s Republic Day 26 turned out to be a somber anniversary. In my earliest recollection, 1963 was one such occasion; 1965 was another. Both were occasions when the seamless joy and the immense pride over India’s nationhood got tempered by deep anxieties regarding the future.

India had suffered a traumatic defeat in the war with China as 1962 drew to a close, and in 1965, the nation was tiptoeing into the post-Jawaharlal Nehru era. Both were occasions marked by a profound sense of disquiet bordering on trepidation. Of course, India pulled through eventually – not only surviving but also flourishing despite the shortfalls and sub-optimal performance on several counts.

On the 64th anniversary of India’s Republic Day, yet another somber occasion arises. The nation is in a dark mood lost in troubled thoughts. A few days ago, there was even doubt whether the solemn festivities of the occasion could take place as scheduled.

Putting behind 1962 war with China

There is much political disarray in the country and the divisions have deepened in the recent months. India’s last three governments have had full five-year terms but an unclear result cannot be ruled out in the parliamentary poll expected in April, which could mean a return to the era of unstable coalitions in the 1990s. Most certainly, an epoch in Indian politics seems breaking loose and drifting away.

Compounding the political uncertainties, economic growth is forecast to remain at a decade-low for a second straight year while inflation in India is the fastest in Asia. Corruption scandals and rise in prices and the cost of living have fuelled public anger and there is an overall frustration with the two major parties.

More fundamentally, the political system is creaking. According to the Association for Democratic Reforms, a quarter of Indian lawmakers at the federal and state level face criminal charges including murder, rape and kidnapping. The parliamentary system itself is showing serious systemic and procedural deficiencies.

The ‘first-past-the-post’ system of Westminster style parliamentary democracy adopted from the British practice at the time of independence has assumed native Indian aberrations. Unlike in Britain, India does not have a two-party system. Proliferation of political parties has resulted in a paradigm where a successful candidate in the election may have secured no more than a quarter or a third of the electorate. This ultimately gets reflected in the power calculus at the top.

The aberrations in the electoral system also led to the consolidation of what is called ‘identity politics’, meaning that by securing the robust support of a particular segment of the electorate (say, based on caste identity or religion), a candidate could get elected.

Of course, serious lacunae have surfaced in the functioning of the parliament itself. While the annual average sittings of the two houses of the Indian parliament, Lok Sabha and Rajya Sabha, in the first decade of the republic (1952-1961) worked out to 124.2 and 90.5 respectively, in the latest decade (2002-2011) they dropped to a mere 70.3 and 69.6. What it means is that the legislatures at the federal and state level are not functioning enough and their functioning no longer meets public expectations and, furthermore, an imbalance has arisen in the delicate equation between the executive and the legislature, which is critical for accountability and ought to act as checks and balances in governance in a parliamentary democracy.

To be sure, correctives are badly needed but then, there is an overall sense of despondency prevailing today that the system has irretrievably lost its way. However, such pessimism is not entirely fair, either. The point is, the failure of the political system is largely to be attributed to the political class and it is not as if India as a nation is failing.

Poor quality of leadership, lack of political integrity and the excessive role of money power in elections have led to the present malaise. Alas, hardly any established party can be singled out as an exception – not even the communist parties, which had a fabulous past record that remains a matter of nostalgia today. Corruption has become rampant and the flamboyant lifestyle of politicians speaks volumes about it, be it of the Left or Right.

Equally, ideology has become irrelevant. Many ‘regional’ parties are in reality based on family kinship. Opportunistic political slogans are also being raised propagandistically in the name of secularism and so on. The electoral alliances are almost exclusively made on the basis of political expediency rather than principles or ideological affinity.

All this has resulted in the erosion of people’s faith in the party system. The bad part is that nothing may change fundamentally in a near term. But, equally, the good part is that as empowerment becomes stronger and the electorate becomes more discerning, there is bound to be pressure building up on the political class to acquit themselves better in conduct and performance.

Arguably, this is already happening, albeit in a small way and still as an urban phenomenon, as evident from the mushrooming of a new political party on the political spectrum – Aam Aadmi Party (Common Man’s Party) – which shirks ideological straight jackets of the Left or Right and is almost entirely tapping into the people’s craving for responsive and accountable governance. The party stormed the citadel in the recent elections to the Delhi legislature almost entirely on the plank of the promise to exorcise public corruption. Maybe, it’s an elusive ideal but it nonetheless caught the people’s imagination.

At any rate, it is not as if the future scenario is completely bleak. A lot of the present trauma, in fact, can be related to the fact that the economy is transforming rapidly. Also, despite the vast lingering problem of poverty, development and empowerment of the people have been making headway.

In comparison with any other country that forms its peer group, India certainly outshines them all with its vibrant democracy. It is by no means an intolerant society, no matter the aberrations in the political system. Over and above, the nationhood itself, which India never experienced before in the present form at any time through the millennia of its existence as a civilization, has crystallized.

Speaking for myself, it is only in India amongst liberal democracies that I, the son of a communist leader, could have been selected on merit to become part of one of the most sensitive state organs – the diplomatic service – and sent to Moscow on my first assignment. This wouldn’t have been possible in America, Britain or Germany in the mid-1970s. Yes, the idea of India is precious and must be preserved.